Even with the prolonged rain experienced across the province over the week, producers were still able to seed throughout all regions.
May 27, 2021 2:21 PM By: Submitted 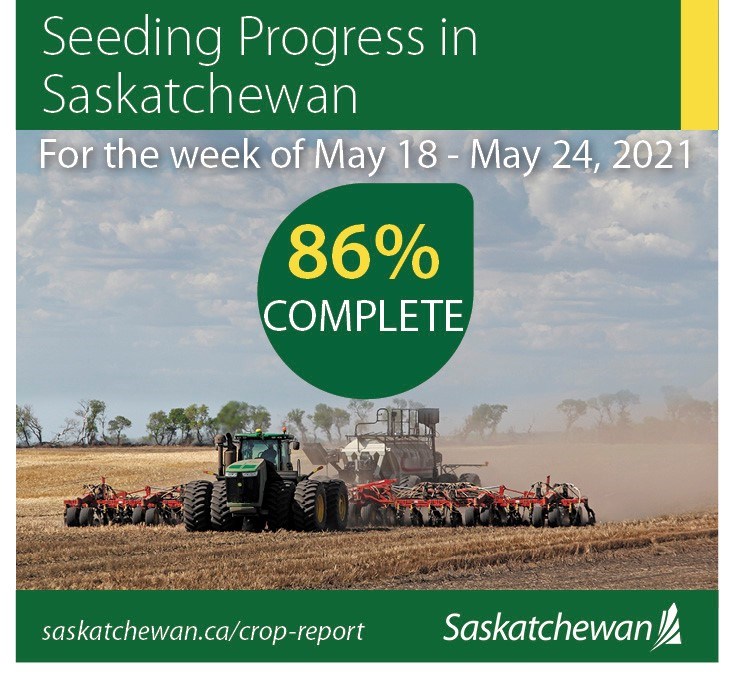 Even with the prolonged rain experienced across the province over the week, producers were still able to seed throughout all regions.

Eighty-six per cent of the crop is now seeded in Saskatchewan, which is ahead of the five-year average (2016-2020) of 77 per cent for this time of year.

Recent rains will greatly improve crop germination and emergence in many parts of the province that were delayed due to dry conditions.

Currently, 77 per cent of the crop is seeded in the east-central region.

The recent rainfallwas not ideal for seeding progressbut will helpearlier seeded crops emerge and establish.

Most of the region received good amounts rainfall this week.

Hay and pasture land topsoil moisture is rated as two per cent surplus, 77 per cent adequate, 20 per cent short and one per cent very short.

Pasture conditions are rated as zeroper cent excellent, 13 per cent good, 28 per cent fair, 43 per cent poor and 16 per cent very poor.

Overall, most of the crops are at normal stages for this time of year, with some behind due to cool weather conditions.

There was minimal crop damage reported this week.

Most of the damage that was present was due to wind, lack of moistureand light frost.

Producers have been busy seeding, spraying as wind conditions allow and moving cattle to pasture.

Steady rain was experienced this week across the province, especially in the south, which saw some very high rainfalls.  The Limerick area received the most with 116 mm.  The Indian Head area received 108 mm and the Odessa area received 100 mm.  The rain will delay seeding for some producers where soils are slow to drain but it is still very welcome to help crop and pasture growth.

Earlier seeded crops have started to show good emergence, but cool night time temperatures have slowed growth in some areas.  In general, crops are normal in development stages for this time of year, but some crops are behind due to an unusually cool spring and limited moisture.  Most of the crop damage this week was due to strong winds, light frosts, limited moisture and flea beetles.

Producers have been busy seeding, moving livestock to pasture, calving and spraying pre-and post-emergent herbicides now that weeds are starting to emerge.

A complete, printable version of the Crop Report is available online at https://www.saskatchewan.ca/crop-report.