Great progress for harvest made by producers all over province

REGINA - Last week’s harvest conditions allowed producers all over the province to make great progress with their harvest operations. Forty-two per cent of the crop has been harvested across the province, up from 23 per cent last week and slightly ahead of the five-year average (2017-2021) of 40 per cent. An additional 20 per cent of the crop is ready to swath or straight-cut. Crops that were not ready for harvest have quickly ripened after a stretch of warm and dry days. 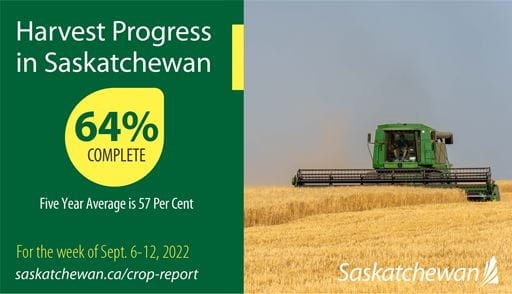 There was very little rainfall across the province this past week which allowed crops to ripen to a point where they could be harvested without delay. The Prince Albert area received 13 mm and the Garrick area received five mm.

The majority of crop damage this past week was attributed to wind and grasshoppers. Strong winds blew swaths around fields and will result in yield loss and a difficult harvest for affected producers. Strong winds are likely to shell out very ripe crops leading to crop yield reductions as well. Grasshoppers will continue to be a significant problem until conditions are less favourable for them. Producers have noticed a slight increase of ergot fungus in their cereal fields this year, likely due to the increase in precipitation received during the crop flowering stage.

With harvest underway in Saskatchewan, we want to remind producers to take breaks, exercise caution and remain safe. Remember to ensure lights and reflectors are in good working order when moving equipment. We ask motorists to remain vigilant and to exercise patience when traveling around or near farm equipment on the highway.