Oxbow's Black Knights back on top of senior girls volleyball

The Oxbow Prairie Horizon School Black Knights senior girls volleyball team has regained their spot at the top of 3A volleyball in the province. The Black Knights captured the provincial title in Assiniboia on Nov. 16, but it was far from easy.
Nov 29, 2019 12:15 AM By: David Willberg 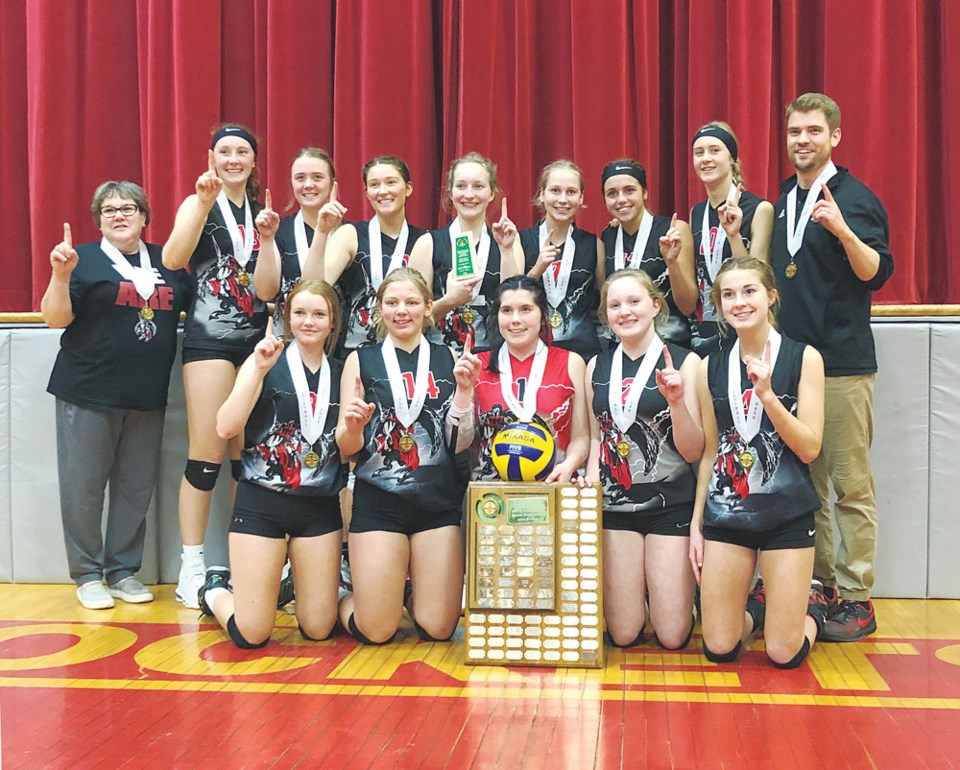 The Oxbow Prairie Horizon School Black Knights senior girls volleyball team has regained their spot at the top of 3A volleyball in the province.

The Black Knights captured the provincial title in Assiniboia on Nov. 16, but it was far from easy. They defeated Lanigan 2-1 in the final, and the score in the third set was 22-20.

“On a match point, we thought we hit the ball out, but the referee called a touch on their block, giving us new life at 14-14. I think we had had three or four match points against us,” said coach Riley Singleton.

Oxbow opened the tournament with three straight wins on Nov. 15, defeating Dalmeny, Assiniboia and Punnichy without losing a set. But then they suffered a 2-1 loss against Unity in their final round robin game Nov. 16 to finish second in their pool with a 3-1 record.

After disposing of Esterhazy 2-0 in the quarter-finals, they had to play the top team in the other pool, Kipling, in the semis. Oxbow earned a tough 2-1 victory, with the score being 16-14 in the third and final set. Kipling was up 14-13 and had match point in the third set, but made a serving error, and then Oxbow earned the final two points to win.

Lanigan and Kipling were the teams Singleton thought would be the strongest in the tournament.

He was pleased with the Black Knights serving and offence at provincials.

“We had spent a lot of time this season focusing on those two aspects of the game, and those were the two things that carried us to our championship,” he said.

Energy from the team was also emphasized, both on the court and on the sidelines, and it proved to be excellent.

“I think the additional energy from the sidelines as well as the fans in the crowd in Assiniboia really helped us out.”

The Black Knights have had a long history of success. They played for a medal at provincials each year this decade. Oxbow won gold at provincials in 2013, the first year Singleton was the head coach, but then they had two silver, a bronze and two fourths until this year.

“We expected to win last year. Last year’s team was outstanding, but we had a key injury the week before provincials to our setter.”

The program was a success long before he arrived, as he inherited a strong tradition of success from Dana Kreinke.

The Black Knights should be strong next year, too, with only two players graduating.

A few teams from southeast Saskatchewan were at boys volleyball provincials as well. At the 2A boys tournament, Redvers School finished fourth. They were third in their pool in the round robin with a 2-2 record, losing 2-0 to Osler Valley Christian Academy (VCA) and McLurg from Wilkie, but recovering to beat Meath Park 2-1 and Island Lake 2-0.

In the playoffs, they defeated Moose Jaw Cornerstone 2-1, but then dropped a 2-0 decision to Osler in the semifinal and 2-0 to Hepburn in the bronze medal game.

At the 3A boys provincials in Tisdale, Carnduff lost 2-0 to Dalmeny, Shanavon and Birch Hills, but defeated Rosetown 2-0 in their final game of the round robin to reach the playoffs. They lost 2-0 to Saskatoon Christian in the quarter-finals.