The goal of Saskatchewan Book Publishing Week is to put a spotlight on authors who are working in and published in Saskatchewan. This year, built around the theme of historic transportation, saw readings in historic locations across the province.
Sep 23, 2016 11:31 AM By: Devin Wilger 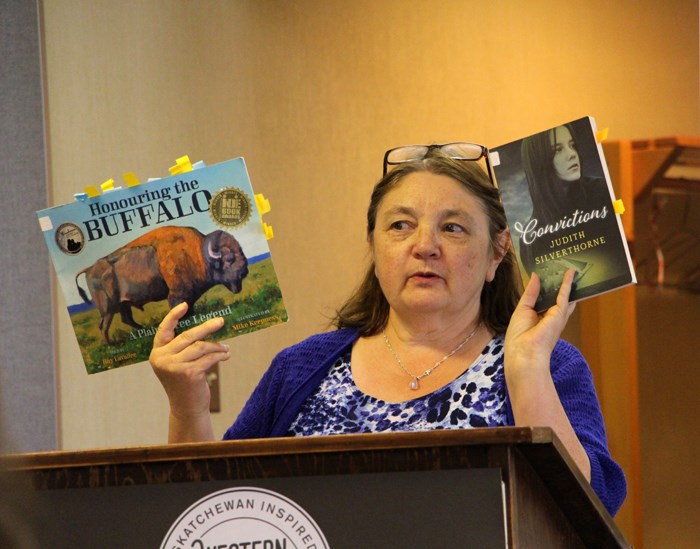 Judith Silverthorne read selections from two of her books – Honouring the Buffalo and Convictions – at the Western Development Museum as part of Saskatchewan Book Publishing Week.Devin Wilger

The goal of Saskatchewan Book Publishing Week is to put a spotlight on authors who are working in and published in Saskatchewan. This year, built around the theme of historic transportation, saw readings in historic locations across the province. That included the Western Development Museum in Yorkton, which had three authors – Cheri Helstrom, Robert Clipperton and Judith Silverthorne – doing three readings.

Courtney Bates-Hardy, project coordinator with SaskBooks, says that the week is about showing people what is being written in the province and celebrating what local authors are producing.

“A lot of people don’t realize how many publishers we have here, and what great work they’re doing.”

The authors also visited schools in the places they visited, in Yorkton taking a trip to the Yorkton Regional High School.

“We wanted to combine public readings with school presentations to reach as many people as possible,” Bates-Hardy says.

Regina author Judith Silverthorne read from two books, Honouring the Buffalo and Convictions. One a picture book, the other a young adult novel centered around women’s convict ships.

“They’re both the first for me in those categories... I love writing every age group, it’s been a different kind of journey but it has been very wonderful trying all the different levels for readers.”

The afternoon saw a wide range of history explored, much of it not well known, whether it was something like the Cypress Hills Massacre, as covered by the book Clipperton edited, or Silverthorne’s own exploration of convict ships. She says that in her case, learning more about history sparked her interest in researching and writing her novel.

“When I first heard about that, I thought how fascinating that there were these ships, and I wondered how these women were treated.”

As an author, Silverthorne is completely on board with book publishing week and the opportunity it represents, both for the authors and the public at large.

“I think it’s a fabulous opportunity for the public to hear some of the Saskatchewan books that are published right here in the province.”

She is also excited to get into schools, and believes that programs that bring authors to talk to kids – whether this one or others, such as the one operated by the Saskatchewan Writers Guild – are important encouragement for budding writers.

“When I grew up, you didn’t realize that authors were real people. You might think they were some dead person in another part of the world. That you can actually meet an author who is alive, that you can some day maybe become one yourself, and to hear some of the knowledge and experience of some of the writers, that you can aspire to be, it’s a wonderful opportunity.”

This is a new idea for SaskBooks, and Bates-Hardy says next year will be particularly special, because it will be tied to Canada’s 150th anniversary.

“We want to make it bigger and better for next year.”