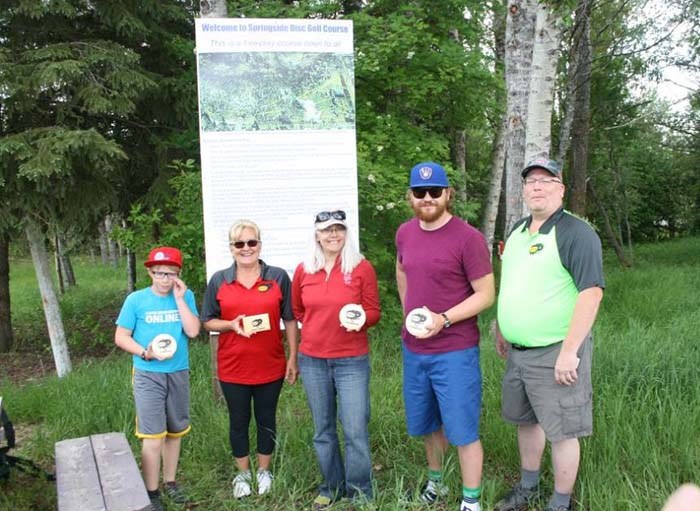 The first event in the 2016 Parkland Association of Disc Golf Tournament series is in the books.

The Vibram Birdie Bash was held in Springside Sunday, with 23 participants entered. The tournament was played over two rounds on the 18-tonal course, with a barbecue of burgers splitting up the disc tossing for the participants.

It was almost an ideal day for disc golf, sunny, warm, a light breeze, and no mosquitos. Only tent caterpillars hanging on gossamer webs detracted from the day, and only a little.

Players went out for 18 in the morning under the rules of the Birdie Bash, aces and eagles being worth five points, birdies three and hitting the post on a birdie or better shot a single point.

As the players ate burgers and hotdogs, they were re-carded into flights, and then headed back out for another 18.

When the finally tally of the 36 was complete, the Men’s Open winner was Todd Schick from Melville, SK., with an amazing 83 points.

The women’s winner, from a field five was Brenda McKay from Birtle, MB, where she is the driving force behind the North Ridge Disc Golf Course which will be officially opened Saturday, June 25.

The Junior winner was Josh Istace from Moosomin, SK. The 11-year-old is already out-throwing his dad Christopher Istace who is heading up the Rocanville Disc Golf Course which will host the next tournament within the PADG, a doubles event June 26.

The Spirit Award went to Irene Cymbalisty of Yorkton, SK.

As mentioned the next tournament for the PADG is June 26 in Rocanville. Anyone wanting to try the course that twists through cross country ski trails, can head out to league night each Tuesday evening at 6 pm.

In other PADG news the course install at Whitesand Regional Park near Theodore is under way. The course will be an 18 dialing in at 7140-feet. It is being installed on the park’s sand green ball golf course, and will utilize the sand greens as out-of-bounds near the placement of a number of the disc golf targets.

With a little luck the course should be ready to throw by mid-June.

For disc golfers Asessippi Beach & Campground north of Russell, MB. will be the place to celebrate Canada Day.

The Asessippi National Disc Golf Course will be hosting a Dynamic Disc 2-Disc Challenge Tournament July 1. You can register now at https://www.discgolfscene.com/tournaments/Asessippi_National_Disc_Golf_Course_2_Disc_Challenge_2016

More good news, we have had correspondence that a verbal agreement for a disc golf course in a Saskatchewan provincial park within the PADG has been received. Details of the proposed nine basket course will be unveiled as soon as the ink dries on a formal agreement.

It is hoped this is the first of many courses in provincial parks as disc golf is an ideal, low cost, all age recreation/sport for those enjoying a holiday at one of the great parks in not just Saskatchewan, but Manitoba as well.