Yorkton Councillor Darcy Zaharia wanted to discuss the sale of the old City Parks Building at 263 Myrtle Avenue.
Jun 8, 2021 7:38 AM By: Calvin Daniels 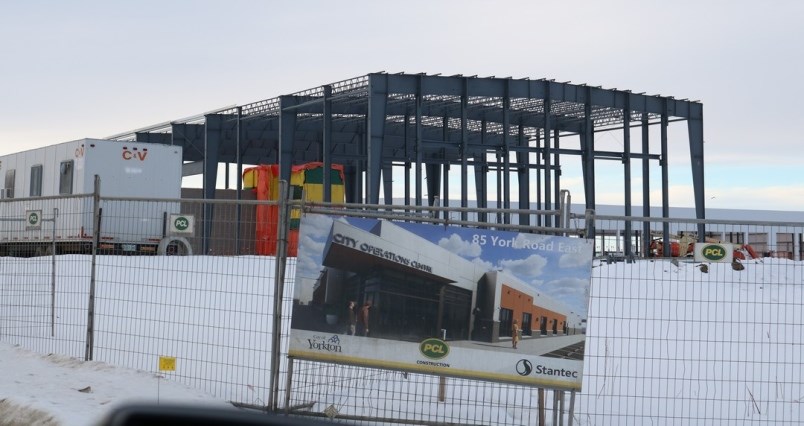 The City Operation currently being built on York Road was again part of a discussion on how City Administration has provided information to Council.

What followed at the regular meeting of Yorkton Council was a lengthy discussion about the safety of the building, the accuracy of information given to Council by City Administration and a return to the much-debated City Operations Centre currently under construction on York Road.

Zaharia began by showing a video from March 2020, where Trent Mandzuk - Director of Public Works told Council the Parks Building was contaminated and was simply unsaleable.

The issue was hydrocarbons in the soil and gases were feared to be escaping into the building.

“The City will forever have that liability... You can’t sell it,” offered Mandzuk.

But the City did receive an offer on the building, $50,000 as is, from Sno Riders to use to store their equipment.

So how could a building that was said to be unsaleable suddenly sell, questioned Zaharia,

Coun. Chris Wyatt said the initial statement about it being too contaminated to sell looks to be part of “a push to build a building of this scope (the facility on York Road,” suggesting Administration was making the push when the Council of the day was “wanting to spend a lot less money.”

Councillors “are not experts in every aspect of the city,” so they must trust that they are being given the best and most accurate information by staff, he noted.

Without a trust in that “this job becomes almost impossible,” he said, adding it leaves Council second guessing things.

City Manager said the safety concerns Mandzuk was talking about was based on information from consultants, and 100-contamination report on the old public works that led to the suggestion “there could be a health risk at the Parks Building.”

An actual health risk assessment on the Parks Building “was not done,” Kaal said Monday.

As for the offer to buy the building the offer was rare in the sense that the Sno Riders were willing to take it knowing of the potential issues and being willing to assume that risk.

But Wyatt was not convinced calling it “straight forward” that the unsaleable comments from 2020 “were part of an agenda to get the bigger (City Operations Centre) project done.”

Coun. Quinn Haider questioned how the affair impacts the integrity of Councillors.

“I put trust in the information we get,” he said, adding the change in message leaves him worrying “I misled people I care about,” adding he doesn’t like feeling he has “deceived people.”

Kaal said there was “no intent to mislead, or misguide Council . . . Absolutely no intent.”

But Coun, Ken Chyz was still not pleased.

“At one point or another we were given false information,” he said, adding at one point the Parks Building couldn’t be sold and the City was liable forever, and then there was an offer that was accepted.

Normally you don’t transfer a contaminated property to another body, said Kaal.

“Normally you wouldn’t do it,” she said.

But when an offer came, Kaal said she brought it to Council, adding it was “an opportunity to unload” the property. “I thought it was worth the risk.”

But, Council was worried they might still be liable, or had under-valued the property. Coun. Wyatt made a motion to cancel the sale.

“Technically we have a valid sale,” said Kaal, adding all material on possible contamination was provided to the Sno-Riders. “. . . They are accepting a contaminated site.”

“It makes no sense for me to sell this building,” he said. “if the people want to take us to court (for cancelling the deal) let’s go.”

“We will do our best to undo it,” said Kaal.

But, before Wyatt’s motion could be passed Coun. Dustin Brears cited he felt a need to have more information before voting. He made a motion to table the motion which passed ending debate Monday and sending the matter to a meeting in July.