The Ruth Shaw Award for Best Saskatchewan film at the Yorkton Film Festival is always one of the most coveted awards of the long-running Festival. Minus Lara is among the nominees for the 2011 award.
May 18, 2011 2:00 AM By: By Calvin Daniels Staff Writer 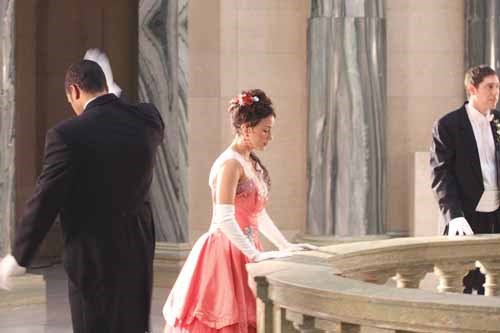 A scene from Minus Lara.Submitted Photo

The Ruth Shaw Award for Best Saskatchewan film at the Yorkton Film Festival is always one of the most coveted awards of the long-running Festival.

Minus Lara is among the nominees for the 2011 award.

Director David Cormican said the Yorkton Festival will be a special event for the film.

"The Yorkton Film Festival will be the worldwide premiere for 'Minus Lara' and what we hope to be the first of many festivals.

"It's very exciting to be premiering right here at home in front of a warm audience. And no pressure on me, but I am pretty stoked having received my first nomination as a producer under the Ruth Shaw Award of Excellence for Best of Saskatchewan. I guess it is our equivalent of the Provincial Oscar. I'm extremely honoured to be up for such a nomination in the category."

Cormican explained the film actually has some success in competition, even before the film was shot.

"The script, written by Surita Parmar, placed second overall in the 2009/10 Canadian Short Screenplay Competition," he said. "That means that 'Minus Lara' had to stack up against several hundred other scripts submitted from around the world."

"It certainly helped with securing the financing for the project, but more importantly, it was the starting point for our writer (Parmar), to getting her first produced written by credit. Which is pretty HUGE for a writer. So many have scripts that will never be produced and filmed. Now that Surita has her first, it will be great leverage to get her second and subsequent scripts produced. It's a pretty big step for a writer to have somebody actually put money up on the table not just to buy the script, but to also hire the crew, the talent, rent the equipment, costumes, caterers, sets, vehicles Surita was pretty excited the day she got that call from me letting her know we were greenlit to make it."

Film Director Rob King said the film actually grew beyond the initial script.
"The script was very short, without dialogue," he said. "But there was a lot packed into it and it was open for some interpretation.

"Originally it called for a big box type store that morphed into an empty space, filled with dancers and snowflakes falling. Unable to find one location that could be undressed and redressed, we opted for a smaller antique store and the opulence of the legislative building. We just needed a visual hook in and out of these respective worlds.

"The essence of the story remained - a clerk is unimpressed by a young woman. She has a fantasy which he is drawn into. They fall in love. In the real world, she leaves him. He regrets his first opinion of her."

Using the provincial Legislative Building as a prime location in the film added some grandeur to Minus Lara.

"I have shot in the legislative building a few times, turning it into ancient Greece, the Parliament buildings and a Georgia courthouse," said King. "This time, we had to move fast as it was close to Christmas and the area we were going to shoot in was about to be decorated by a large tree."

Shot entirely in Regina, King said making a film in the Queen City is no harder, or easier than any other locale.

"There are no special challenges that are not overcome by the advantages of being in a smaller centre," he said. "That is, there are fewer locations to choose from, but almost anyone is willing to help out. So we could get the legislative building for a song, because they liked the story."

King said the challenge was more one of time and of course that relates to budget too.

"The main challenges would have been faced in any location," he said. "A dance piece had to be created, performed and shot in very little time and without the music that would ultimately be written for the film. That came later. We did it in the time it probably took the producer and director of 'Chicago' to have a cup of coffee."

In terms of funding Cormican said that is always a challenge for indie film, and 'Minus Lara' was no different.

"It was a roll of the dice really. I put together the best team of people I knew that were capable of producing greatness," said Cormican. "Rob (King), of course as director. Juno-nominated composer Doug Romanow and Gemini-winning costume designer Brenda Shenher rounded out the production team.

And of course, my wonderful friend Romina D'Ugo (Funkytown, So You Think You Can Dance Canada) agreed to come on board to play Lara.

"With all those elements in play, matched up with Surita's script, which was clearly a winner, we sent off our proposal to Bravo!FACT to see if they agreed with us as much as we did. Turns out they did. So we were greenlit relatively quickly all said and done."

Cormican said D'Ugo was an important addition to the project in the lead role.

"I was really glad we were able to get Romina in between her gigs back and forth between Los Angeles and Toronto and her publicity tour for her latest film 'Funkytown', which is actually screening in Cannes right now," he said.

King said the rest of the cast fell into place nicely.

"David (Cormican) played the part of the clerk The dance was choreographed by Johanna Bundon. She found the dancers which included Fada Dance from Regina and friends. Everyone had to be able to dance and learn the choreography in a few short days, then re-learn it when we filmed, as the actual location has a big marble-ringed hole in the center - something we couldn't replicate very effectively for rehearsals. Also, where the camera ended up dictated where certain characters should be at a given time."

In the end the combination of script, locations, cast and crew came together to create something special in the mind of King.

"The film turned out very well considering the challenges versus time and money," he said. "Everyone put their hearts into it and we had some real pros pitching in. We had to film in two locations, one in the contemporary world and one in the past, in two nights, with a choreographed dance thrown in, period costumes and a very small crew."

The 3:52 length 'Minus Lara' is also headed to its television debut.

Cormican said it is the length it is to meet the "strict length of time allowed by Bravo!FACT who commissioned the piece."

While setting restrictions on its length, the connection to Bravo! also provides a forum for the film to air.

"It will indeed have its television premiere sometime in the summer," said King. "No date has been set just yet.

"We have also been approached from some other interested parties to purchase the rights to the film for other markets, but nothing has been finalized beyond Bravo as of yet."

The Ruth Shaw Award and other Golden Sheaf awards will be presented at the Festival gala May 28.