SHHS to represent region at provincials

The Sacred Heart High School Drama Club will get a crack at its fourth provincial title next week. Two weeks ago, the school won the Region IV High School Drama Festival with its production of In the Garden of the Selfish Giant.
May 8, 2013 2:00 AM By: By Thom Barker Staff Writer 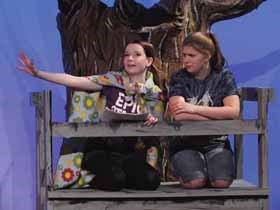 Corrigan Fafard, left, portraying Brianna, and Michelle Puchala, in the lead role of Maggie, perform a scene from In the Garden of the Selfish Giant during the Region IV High School Drama Festival two weeks ago at Yorkton Regional High School.Submitted Photo

The Sacred Heart High School Drama Club will get a crack at its fourth provincial title next week.

Two weeks ago, the school won the Region IV High School Drama Festival with its production of In the Garden of the Selfish Giant.

The Sandra Fenichel Asher play, directed by Sacred Heart teachers Kimberly Wyatt and Teresa Hartman, was selected best overall production of 11 entries by eight schools in the 2013 competition. It was the 12th consecutive and 15th all-time regional triumph for the SHHS drama program.

The production also garnered a half dozen other awards including the prestigious Mary Ellen Burgess Performance Award to Corrigan Fafard for her portrayal of the idealistic and precocious Brianna, who acts as a catalyst for reconciliation between the protagonist, Maggie, and her mother.

Michelle Puchala took home an acting award of excellence in the lead role of Maggie.

Hartman said year in and year out, it is the students that make the SHHS drama program so successful.

"I really do think it's the dedication of the kids," she said. "This is a town where drama is fun. It's the cool thing to do."

She also said the continuity provided by the long-term leadership of Greg Digout can't be underestimated. Digout will receive an award this year from the Saskatchewan Drama Association for his contributions to Saskatchewan drama over the last two decades.

But it's not just the Catholic school that excels in drama. Yorkton Regional High School gave its separate school counterpart a run for its money with The Greek Mythology Olympiaganza, directed by Brennan Risling, which took runner-up to best overall production. Alex Redwood, who played Zeus and a number of other roles, was runner-up to Fafard for the Mary Ellen Burgess Award.

"The plays this year for the Regional were amazing," Hartman said.

In addition to its festival-winning entry, SHHS entered two other plays in the 2013 Region IV Festival: Check Please, by Jonathan Rand and The High-Schoolers Guide to the Galaxy, by Bryan Starchman.

In all, the two local high schools garnered 37 awards for the five plays (see sidebar).

SHHS now takes In the Garden of the Selfish Giant to the Saskatchewan Drama Association's 2013 Provincial Festival May 9 to 11 in the Riddell Centre Theatre at the University of Regina.

Sacred Heart has previously won top provincial honours in 2008 for Baby, in 2004 for The Wild Flowering of Chastity and in 1999 for New Canadian Kid.

In the Garden of the Selfish Giant, SHHS