A single tender for work on the Broadway/Highway #9 Gateway Development was accepted by Yorkton Council at its regular meeting Monday. “In June 2020, Council approved budget for the beautification of Hwy#9 and Broadway.
Jun 7, 2021 8:20 PM By: Calvin Daniels 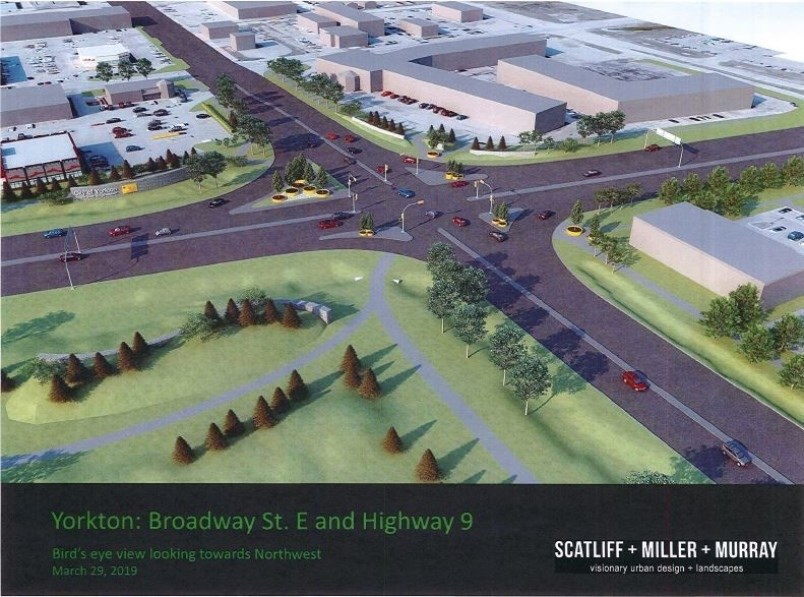 A single tender for work on the Broadway/Highway #9 Gateway Development was accepted by Yorkton Council at its regular meeting Monday.

“In June 2020, Council approved budget for the beautification of Hwy#9 and Broadway. This project would improve the aesthetic value of the City of Yorkton’s highest-trafficked intersection. It was recommended by the Economic Development Committee and was endorsed by YBID with a monetary contribution,” explained René Richard - Director of Engineering and Asset Management with the City.

“The final conceptual design was brought to Council April 26, 2021 for final approval prior to proceeding to tender. At that meeting, Council directed Administration to proceed to the tender process and that the project stay within the approved budget.”

In order to remain within the designated budget amount, the scope of the project for 2021 was reduced to include only the southern two quadrants, added Richard.

In addition, certain landscaping items were not included in the 2021 tender invitation.

However, “The bid submitted was within budgetary estimates, but did not include the required bonding. After the tender closing date, the bidder submitted an “Irrevocable Stand-By Letter of Credit” in lieu of the bid bond. Further, the bidder has indicated he will provide the required Performance Bond and Labour & Material Bond should the tender to be awarded to him. The bonding is critical to protect the City from liability should the contractor not be able to complete the project after initiation or should any subcontractors or suppliers not be paid. The bid amount is within budgetary estimates,” noted Richard.

The tender was approved with the caveat g the City receives the required bonding documentation from the contractor.