Kerrie Norton is one of a number of members of the Cote First Nation who were raised off-reserve in urban centres. Having grown up in Saskatoon, Norton describes herself as a city girl through and through.
Jun 22, 2021 9:11 AM By: SaskToday 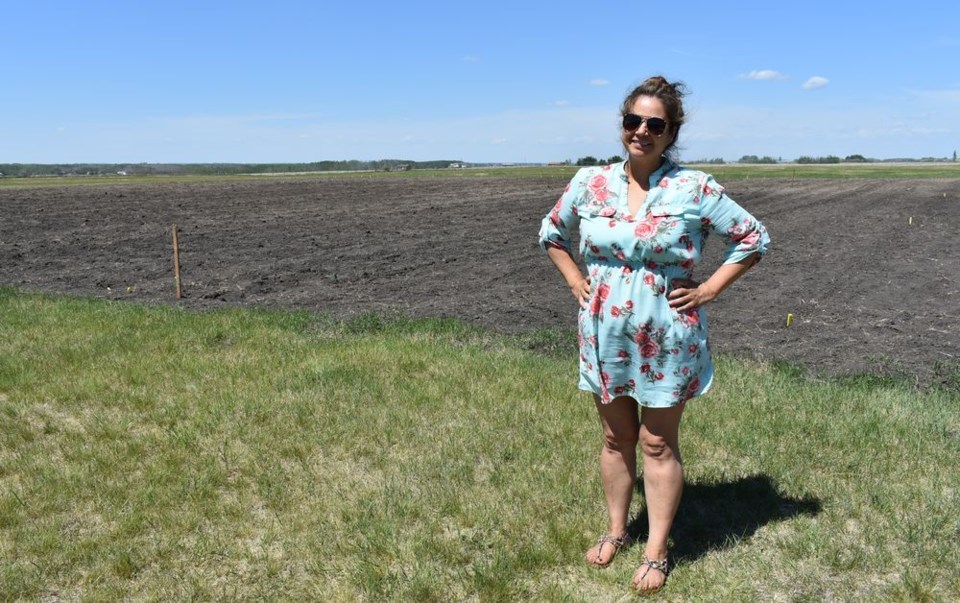 Kerrie Norton was photographed in front of the freshly planted community garden on the Cote First Nation. With a goal of teaching people to eat healthier, Norton also aims to teach new generations to feel empowered by growing their own food.

Kerrie Norton is one of a number of members of the Cote First Nation who were raised off-reserve in urban centres. Having grown up in Saskatoon, Norton describes herself as a city girl through and through. However, after a lucrative career as a network analyst working in the Alberta oil and gas industry, Norton has recently returned to her homeland with a vision for her own healthy new lifestyle and hopes to set an example that will inspire others.

“Working in the oil and gas industry was great money,” Norton shared with the Kamsack Times. “During those years – and until I was laid off, I was able to buy high quality, organic food for my family. Without that sufficient income, I really began to understand the correlation between diet and health. From my personal experience, I can see how not being able to afford good food can lead to obesity, depression, fatigue, and disease like diabetes, stroke and heart disease.”

Norton believes poverty is at the root of the majority of problems facing Indigenous communities across Canada. While she has experienced life with a good salary and high quality foods, Norton has also lived in and around extreme poverty, and she believes adequate nutrition is a vital step in creating real change for her nation and others like it in Canada.

“Families that live in poverty are stuck in a vicious cycle. When you don’t have a sustainable, living wage, you are forced to buy cheap foods with very low to no nutritional value. The packaged and processed foods may do the job of filling your babies’ hungry tummies when they cry, but they are mostly filler foods with high amounts of preservatives, salt, and sugar. Our people are facing a health crisis and I believe that changing what we are eating will be the first step toward healing.”

Norton has made it her mission to learn about food systems in Canada – specifically Indigenous growing methods, like the Three Sisters Gardening method of group planting corn, beans, and squash. Admitting she is at the very beginning of her learning process, Norton said she currently knows very little about how to grow her own food, and that concerns her.

“I ask myself, what would happen if the economy tanked? What if our infrastructure collapsed and we weren’t getting food trucked in anymore? I would probably die. Not only do I want to learn how to eat locally grown, nutritious foods, I want to learn how to grow those foods to feed myself, my family, and my people.”

This will be the first summer that the self-described city girl has planted her own backyard garden. She admits she expects a lot of failure, but that is not stopping her from diving into the new practice and learning from her mistakes. In addition, she has led the initiative to get her peers involved in growing a community garden. The 100 foot by 110 foot garden is located in a large open field behind the Chief Gabriel Cote Education Complex, and will provide a number of organic vegetables to be shared among Cote First Nation members come harvest time.

“I’d love to plan a big harvest event to celebrate,” shared Norton. “This is just the start. Once we get going strong, I believe that harvesting our own locally grown, organic foods will lead to a sense of pride. It will motivate many of us to get out of that stuck-in-the-mud feeling that comes with living in poverty.”

In her plans for the future, Norton aims to organize a series of workshops that teach community-based gardening, seed harvesting, canning, pickling, dehydrating, and off-grid winter storage techniques. She is excited about the road ahead, her big personal learning curve, and eventually sharing her accumulated knowledge to help others feel empowered.