The Saskatchewan Seniors Mechanism will soon be presenting plans to create an Age-Friendly Moosomin to Moosomin Town Council.
May 29, 2021 11:38 AM By: Spencer Kemp - Local Journalism Initiative Reporter (The World Spectator) 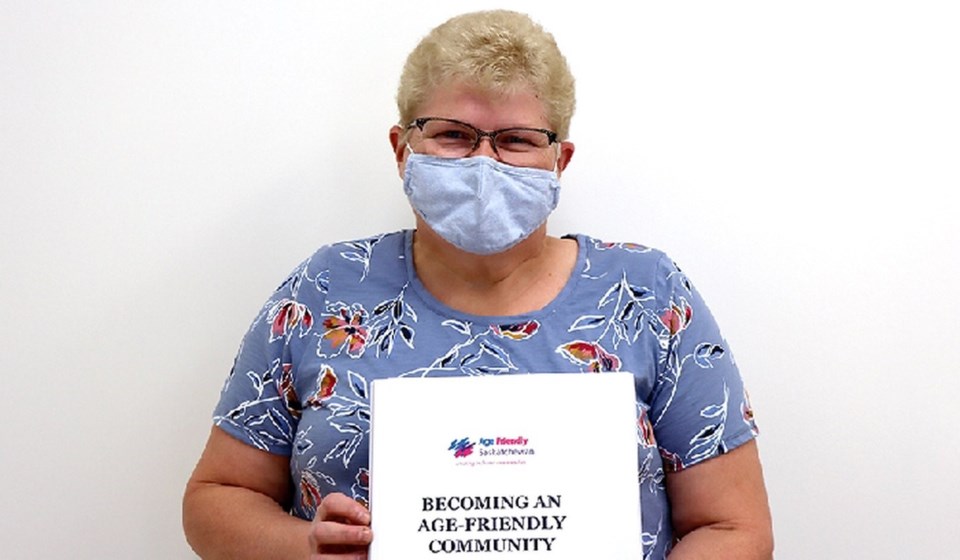 Devona Putland wants to set up an Age Friendly committee in Moosomin.

The Saskatchewan Seniors Mechanism will soon be presenting plans to create an Age-Friendly Moosomin to Moosomin Town Council.

The push for an Age-Friendly Moosomin has been spearheaded by the former principal of MacLeod Elementary School and board member with the Saskatchewan Seniors Mechanism, Devona Putland.

“We had a meeting to introduce the idea, and from that meeting, ten people from Moosomin attended by Zoom and two from Regina. From those people who attended the Zoom meeting we just got a feel for what Moosomin should do and everybody, when asked their opinion, thought this was a worthy venture that Moosomin could pursue,” Putland explained.

She says the next step will be putting together a steering committee, which will happen during a meeting this week.

“For this meeting, I’ve set an agenda for some of the basics. We need to get a steering committee together so that we have some basic people to make decisions as to when the next meetings will be, where we’re going with them, and then we also need to do a survey of the community. For this meeting, I have some sample surveys to give the group so that they can Moosomin-ize the survey. Every community is unique, and the survey should be able to seek out what things could be done in the community and what things are already good about the community. So that’s a good place to start.”

The survey will be discussed during Wednesday’s meeting and will be broken apart into different categories. Putland says that members of the steering committee will each be tasked with creating Moosomin-specific questions which will then be used to survey shortcomings in the community.

Putland says the survey is expected to be ready by fall.

“We want to make sound decisions. We also had the Mayor of Moosomin, Larry Tomlinson offer us representation to come to a council meeting to speak to the council about what age-friendly involves. I would also like to present to the RMs. So getting some people on board that might like to help with that is what we’re after. I have a PowerPoint done up so it’s not going to be a huge job, but it’s good to get people out just so that the face of Age-Friendly isn’t just mine.”

After establishing a steering committee and conducting an Age-Friendly survey on the town, Putland says the next step will be tomake the presentation at council.

“With town council, the ultimate relationship would be someday we need to have their support in order to solidify the long-range plan,” Putland said.

Putland notes that part of the presentation to council will include the economic benefits of a strong senior population, noting that seniors will spend retirement money in the community.

During the Age-Friendly Moosomin meeting in March, Putland says participants addressed both the strong and weak points of Moosomin.

“We asked people to introduce themselves and tell about something they thought was age-friendly in Moosomin. So people discussed our senior housing units, they discussed the Prime-Time activity director that’s been hired and lots of very positive things. The one thing that did come up was that we have things that could be better, like sidewalks in the community, and assisted living isn’t here yet but that is a gap that’s already been identified.”

Sidewalks were a large focus by the members of the meeting but Putland acknowledged that sidewalks can’t always be a priority.

“But with things like the cancellation of Greyhound and STC, we have things in our community that differ for people like me who drive their own vehicle and can get to the city independently as opposed to somebody who can’t drive to the city anymore. The whole part of this survey is kind of unique because we do have an economic development officer in town and what that survey may shine a light on are some economic opportunities. If he’s trying to attract new services to town, he might see that we have a need for a transportation system, or maybe there are things that need to expand that we already have. We may have part of a service that we need to do just a bit of a different way in order to fill a need that still exists. I think the survey that is coming will identify those needs.”

Putland says that even though there are areas that require improvement, she sees appeal in Moosomin.

“When Moosomin got our new hospital we were very fortunate, we had some very solid medical professionals in our town and that has only expanded. Even on top of the people within our town now as they age, we also stand to attract a lot of other community people that are looking for a retirement community.

“The only one thing that every person has in common is that every day that passes, we all are a day older. If we don’t start looking at that need, we’re going to find that we’re in a tough situation.”