Yorkton’s Nick Fetsch was awarded the Grassroots Player of the Year 2016 by Sask Soccer. Fetsch received his award on Saturday, Mar. 18 at a banquet in Swift Current.
Mar 23, 2017 10:19 AM By: Stefanie Davis 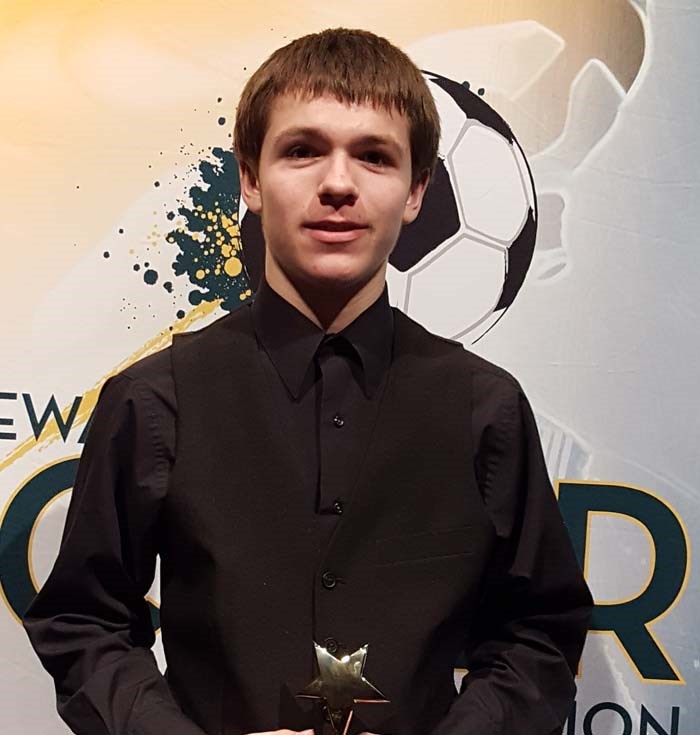 Yorkton’s Nick Fetsch was awarded the Grassroots Player of the Year 2016 by Sask Soccer.

The Grassroots Player of the Year is awarded each year to players who have demonstrated extraordinary performances and best exemplify the values of the Saskatchewan Soccer Association and its membership during the calendar year based on the following criteria: a) individual on-field ability and accomplishments b) team success c) dedication d) sportsmanship and fair play and e) contributions to the soccer community.

Fetsch led his teams by being the top goal scorer to two provincial championships in 2016. In outdoor provincials in July in Lloydminster, he netted 12 goals in five games and helped the Yorkton United Football Club boys under 16 team capture the provincial title. Fetsch was named MVP of the provincial tournament.

Following the summer schedule, Fetsch picked up where he left off with his high school team and helped Sacred Heart High School capture the 2A boys’ provincial crown in Prince Albert. He scored an unbelievable 37 goals in just 14 games in the high school season, including eight goals at provincials and four goals in the provincial final. Fetsch was named offensive MVP for his team. Based on his results in soccer, Fetsch was also awarded athlete of the month at his high school for the month of November.

In five tournaments in 2016 playing with Yorkton United U16 team, which amounted to 21 games, Fetsch scored 53 goals.

He participated in the WCP Cup in Regina in March and led his team to a silver medal. Fetsch finished second in goal scoring at this tournament scoring 12 goals in five games.

Fetsch played PSL with Regina FC in the summer of 2016 and ended up second in the scoring race for the U16 boys.

He also helps Yorkton United with coaching - he worked with an under 6 group this past year. He is also an active referee with the Yorkton United club.

Fetsch played Futsal in the men’s league this past winter and was the leading goal getter in the league for players who were in the under 16 category.

Fetsch guest played with QC U16 Regina, FCR Regina U17 and FCR Regina U20 in three different tournaments this indoor season - for two of these, he was the leading goal scorer at the tournament.

He recently competed in the Under 16 provincials in Regina where his YUFC team captured silver and Fetsch was, once again, awarded the MVP of the provincial tournament.