The Yorkton United Girls U18/16 team competed in the Swift Current Southwest Soccer Fest tournament this past weekend.
Jun 3, 2015 2:03 PM By: Submission 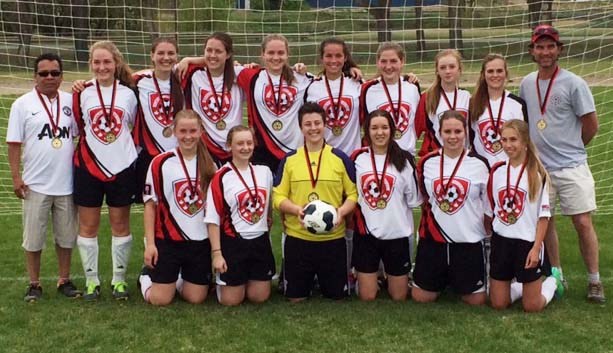 The Yorkton United Girls U18/16 team competed in the Swift Current Southwest Soccer Fest tournament this past weekend.

There were six teams competing in their division from The Battlefords, Weyburn, Moose Jaw and two clubs from the host city of Swift Current.

The first game on Friday evening was played against Swift Current United U18. Yorkton came out with the 3-2 victory. Kendra Varjassy recorded two goals and an assist, Allison Berge recorded one goal with Roma Zulyniak adding an assist.

The second game of the tournament was on Saturday afternoon against Swift Current United U16.

This game was a back and forth affair with Taryn Kustra opening the scoring on a feed from Kendra Varjassy. Swift Current answered back with two quick goals to lead 2-1 at half.

The second half was back and forth with Swift Current going on to a 3-1 victory.

The final round robin game was against Weyburn on Sunday morning.

Yorkton controlled play from the opening whistle with Kendra Varjassy recording the hat-trick with assists going to Lauren Maier and Taryn Kustra as Yorkton won 3-0.

Edie Schramm registered the shut out.  This set up a rematch in the Final against Swift Current U16.

Yorkton controlled the tempo of this game from the outset but the first half ended scoreless. Yorkton carried the momentum to open the second half which resulted in Kustra putting one past the Swift Current keeper, bending the twine on a crossing feed from Kendra Varjassy to give Yorkton the 1-0 lead.

From there the Yorkton defenders and goaltending of Edie Schramm shut the door and Yorkton claimed Gold with a 1-0 victory.