AUTOTRADER — Saskatchewan stayed true to its roots in 2022, again outpacing every other province in the sheer number of trucks on its Top 10, According to AutoTrader. The Ford F-150, Chevrolet Silverado 1500, GMC Sierra 1500, and Toyota Tacoma held on as category favourites.

Data released Dec. 8 by AutoTrader, Canada's largest and most trusted automotive marketplace, reveals a nuanced view on car shopper preferences in 2022, underscored by surging consumer demand, residual impacts from the global microchip shortage, and record high fuel prices. While luxury and mainstay car brands remained top favourites for Canadians, more economical options also gained in popularity. The tried-and-true Honda Civic soared four spots to the second most searched vehicle, while the Toyota Corolla and Camry rose several spots on the Top 20. AutoTrader's 2022 Top Searched vehicle list saw the Ford F-150 hold strong as Canada's most sought-after vehicle for the eighth year in a row, while searches for BMW M cars were bumped off the list in favour of an SUV, the Jeep Wrangler.

With 11 million Canadians visiting AutoTrader.ca to browse hundreds of thousands of vehicles for sale each month, AutoTrader mines and analyzes its search data each year to capture the pulse of Canadian car buyers' interests and provide insights into their most coveted car selections. 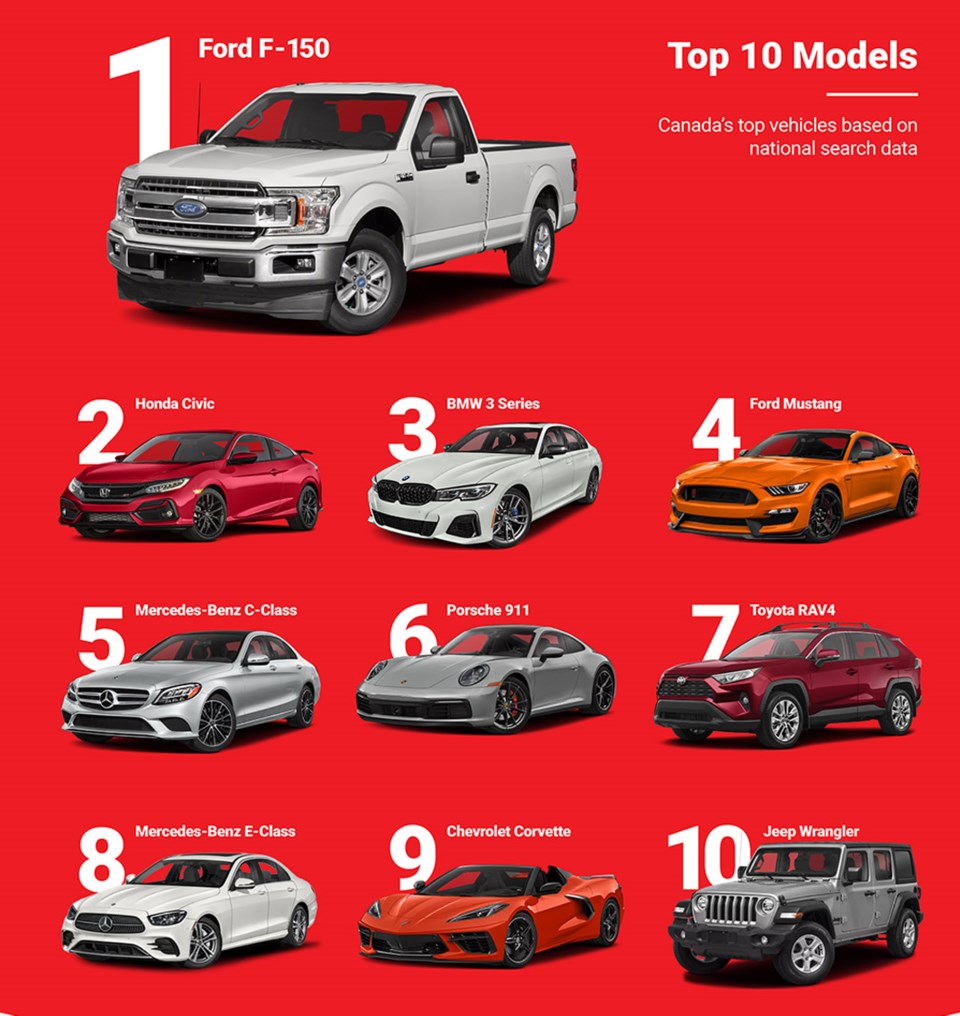 With cost of living and gas prices on the rise in 2022, Canadian consumers appear to be giving extra thought to their car purchases. This year, the most significant shift on the Top 10 Most Searched list was the Honda Civic, jumping from sixth place to second. Additionally, the budget-friendly Toyota Corolla rose considerably in search interest, rising eight spots (#23 to #15) since 2021, and making its way to the Top 20 list nationally for the first time since 2019 and replacing other vehicles to rank in the Top 10 in Quebec and Atlantic Canada. Such shifts suggest that some Canadians are indeed searching for more economical options, and cars as a category still remain popular.

"2022 has been exceptionally different to previous years – with higher costs of living, vehicle shortages, and economic pressures top of mind," says Ian MacDonald, Chief Marketing Officer, AutoTrader. "However, it is encouraging that Canadians' vehicle purchase intentions remained consistent, as they looked for ways to make financially-savvy decisions, including a willingness to be flexible on vehicle selection, and spending more time researching and leveraging tools like the marketplace in their car shopping journey."

BC Edges Away from Luxury

This year the Honda Civic earned a spot in the province's Top 10 most searched vehicles list, knocking the BMW M from the list, signifying a continued shift away from luxury vehicles for British Columbia. In 2021, the more economical Toyota RAV4 (#4) replaced the luxury BMW X5. Whereas in 2020, BC had the most luxury vehicles in the country compared to any other region at six vehicles – in 2022 this was down to just four. As for top honours, the Ford F-150 held strong at #1.

Larger vehicles continued to command attention in Alberta. Comprising half, the top searched list were four SUVs, one more than last year, and a truck. The Toyota Tacoma, 4Runner and Chevrolet Corvette were knocked off the list, and the BMW X5 (#8), Honda Civic (#9) and Toyota Highlander (#10), became new additions for Albertans.

Saskatchewan stayed true to its roots, again outpacing every other province in the sheer number of trucks on its Top 10. The Ford F-150, Chevrolet Silverado 1500, GMC Sierra 1500, and Toyota Tacoma held on as category favourites. Adding to the province's year-over-year record of having no luxury vehicles on the list, the Honda Civic (#3) made a new appearance, reinforcing Saskatchewan's penchant for practicality.

Cars continued to dominate in Ontario, taking up 80 per cent of the region's Top 10. This year, Ontarians were seeking more economical options, with one less luxury model making the cut, and the Honda Civic rising to top spot all the way from fifth last year. In 2022, the Honda Accord (#10) also replaced searches for BMW M vehicles.

2022 marked the first place return of the perennial favourite Honda Civic, reclaiming the top spot from the Porsche 911 – the surprise favourite of 2021. The Porsche 911 didn't fall far behind (#2), creating an interesting mix of luxury and economical. The Toyota Corolla (#8) was a new addition, bumping the Jeep Cherokee from the Top 10.

SUVs gained traction in Manitoba this year, accounting for 60 per cent of the Top 10 list and making it the province with the highest interest in this category. The 2022 addition of the Toyota Highlander (#9) in place of the Chevrolet Corvette pushed cars as a category to a close second.

Maritimes Move Away from Upsizing

Atlantic Canada continued to place less importance on luxury in 2022. The 2021 regional rise of SUVs was short lived, with the elimination of the Toyota Highlander making room for the Corolla (#9) in this year's Top 10. While the Ford F-150 maintains its first-place ranking, cars and sedans account for 50 per cent of the vehicles on the list, with no mention of any luxury vehicles. 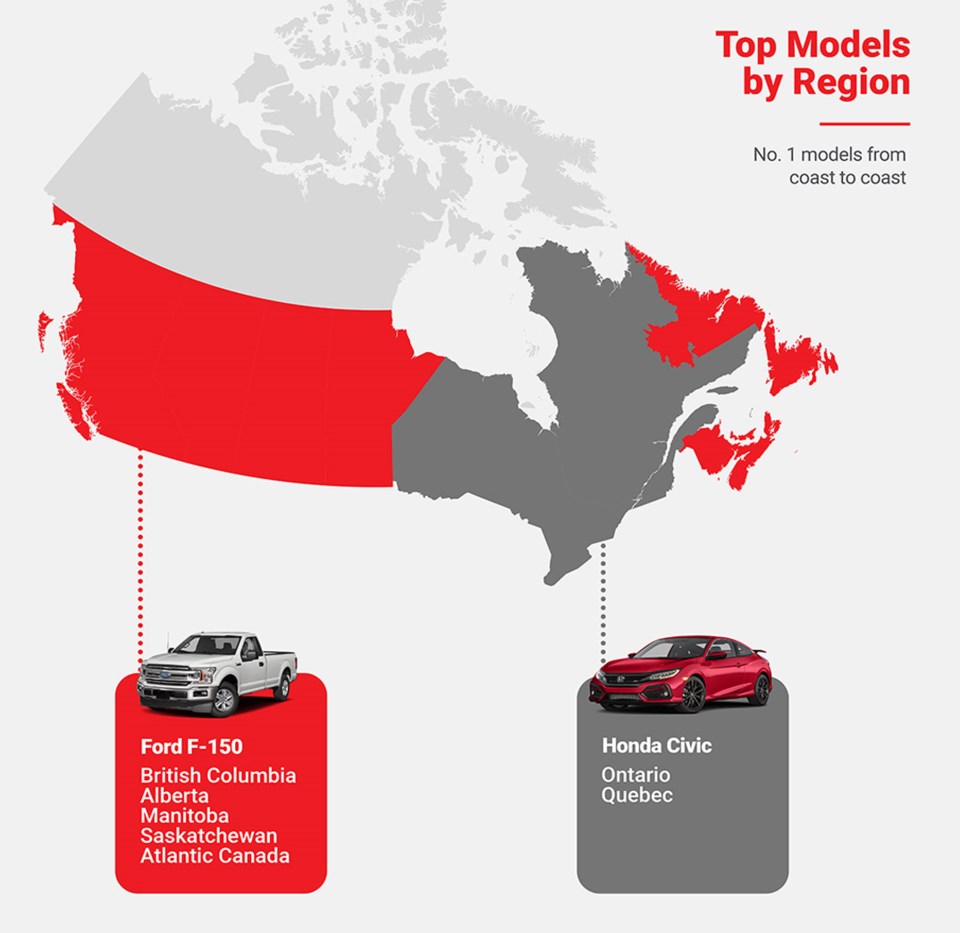 In addition to mining its marketplace data for insights and trends, each year AutoTrader conducts ongoing consumer research studies to provide an up-to-the minute view of the evolving automotive landscape. This year's research explored how car shoppers are navigating the aftermath of the microchip shortage, amid inflation and cost-of-living increases.  Observations include:

Electric vehicles (EVs) have been climbing in popularity for years, with interest soaring to new heights in 2022. When gas prices skyrocketed in March, searches for EVs on AutoTrader spiked too, increasing 89 per cent year-over-year. According to a study conducted among AutoTrader users across Canada, 2-in-3 EV intenders said the rise in gas prices directly accelerated their desire to go green, in a bid to reduce fuel dependency. Throughout 2022, the number of car shoppers inquiring about EVs climbed up 148 per cent compared to the same time last year. Fuel cost efficiency remains the top factor for EV adoption, followed by environmental friendliness and low maintenance, with EV searches the highest in British Columbia and Ontario, likely in response to greater government incentives offered in these regions. With the EV market evolving to keep pace with demand, 2022 saw a number of new releases, including highly anticipated EV trucks, with the arrival of the GMC Hummer and Ford F-150 Lightning. 2023 is already shaping up to be another big year, with the anticipated Chevrolet Silverado EV and Sierra launch, an EV truck from Ram, and EV performance cars becoming a bigger trend throughout the next year.

This year Canadians continued to face higher vehicle prices, less availability and longer wait times, as impacts of the microchip shortage persisted. New vehicles became an even hotter commodity, with the average time a new vehicle spent on AutoTrader dropping from 86 days in 2021 to 49 days in 2022 (a 43 per cent decrease). Canadian vehicle intenders proved they were ready to come out on top, adapting to the new market norms, with 33 per cent willing to change the vehicle brand and model they were planning to buy (up from only 20 per cent in 2021), and 23 per cent willing to pay more due to the shortage. 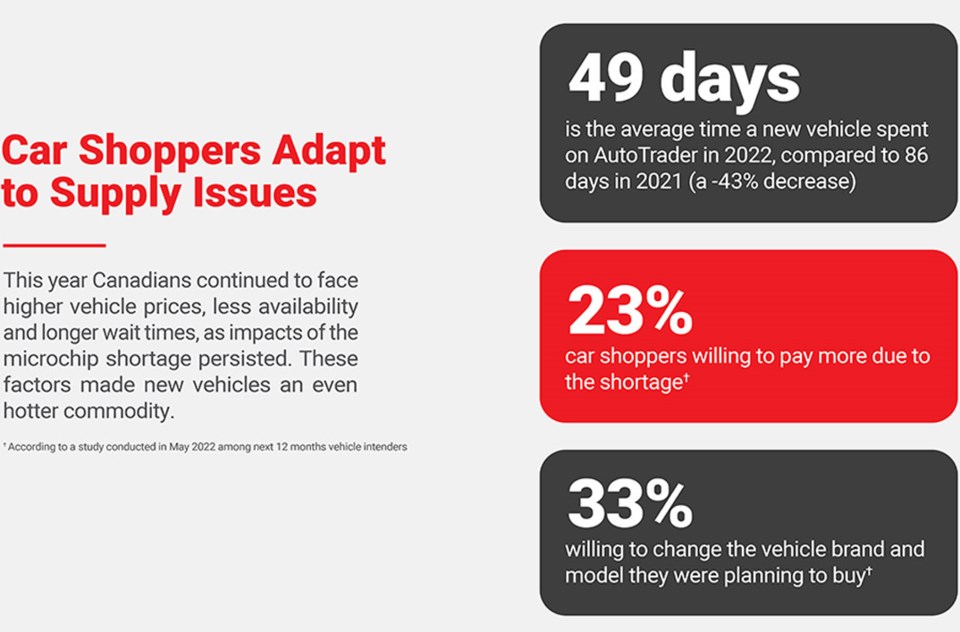 3) Canadians Turn to Used Vehicles as Prices Start to Soften

Last year, the impacts of the global microchip shortage strained new vehicle supply, prompting more Canadians to consider buying used. This trend continued to grow in 2022, as research conducted on AutoTrader revealed a third (36%) of Canadian vehicle intenders were willing to switch from purchasing new to used, a 10 per cent jump from 2021. With the average price of used vehicles softening, and inventory rising on AutoTrader, used vehicles continue to be an appealing option for car shoppers.

Despite economic uncertainty, AutoTrader's research indicates a promising outlook for the automotive industry. The research showed that Canadians' intentions to purchase a vehicle in the next six months actually increased to 24 per cent in October 2022, compared to March of this year (18%). Most vehicle intenders have a positive view of their personal and household finances, with only a few (15%) feeling that their situation may worsen over the next 6 months. The study revealed that car shoppers' budgets likely won't change even if the market does, regardless of if the economy stays the same or declines.

"Affordability continues to be an important factor for Canadian car shoppers, so we weren't surprised to see the Honda Civic – a car known to deliver performance at an accessible price point – become even more relevant," says Jodi Lai, Editor-in-Chief, AutoTrader. "We also saw Canadians staying loyal to many of their favourite vehicles, with the Ford F-150 coming out on top for the eighth consecutive year as the top searched vehicle in Canada and the only truck on the list. The introduction of the Jeep Wrangler however knocked BMW M searches off the list, while the Toyota RAV4 jumped up three spots from 2021, further highlighting Canadians' preference for more practical vehicles."

Methodology: Analysis was performed based on site analytics from AutoTrader using Canadian search data from Jan. 1 to Oct. 25, 2022. Year-over-year analysis was based on data from Jan. 2021 to Oct. 25, 2022. AutoTrader.ca commissions independent third-party research to understand Canadian car shopping habits amongst both car intenders and past purchasers. Throughout the year, AutoTrader also surveyed its users to maintain a pulse of car shopping behaviours over the course of 2022.