There’s something to be said for preserving and studying history. A film crew from Winnipeg is following up on the lives of three steam locomotives that operated in southeast Saskatchewan.
May 13, 2015 1:00 AM By: Jordan Baker 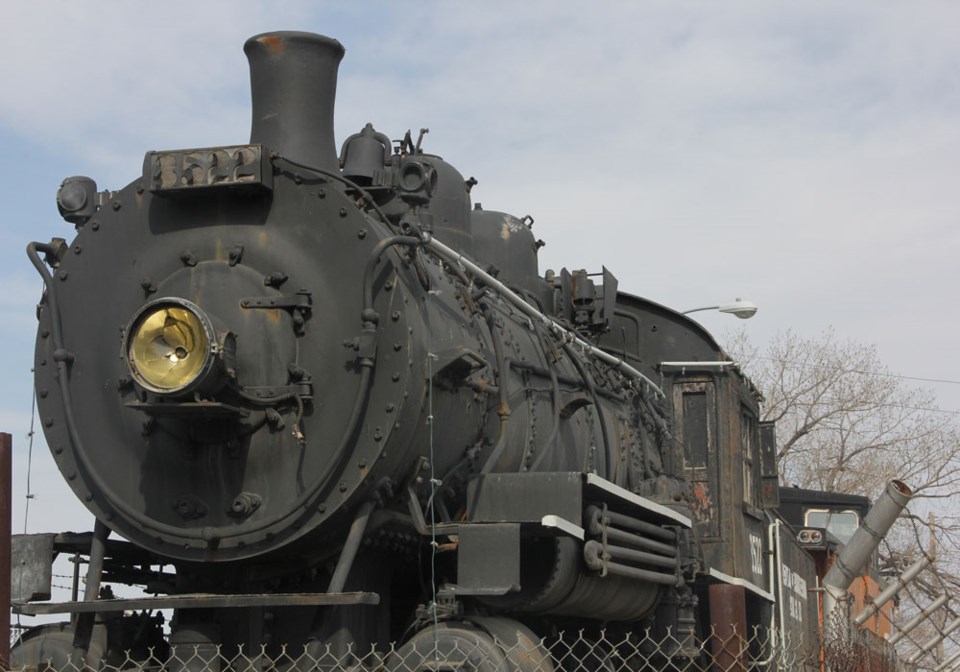 Locomotive 3522, which rests at the north end of Main Street in Bienfait, is one of three locomotives retired in Bienfait that will be a subject of the documentary, The Locomotives of Bienfait. The filmmakers are seeking locals who may have had first-hand experience working with the locomotives or may have stories to share about their use in coal mining.

There’s something to be said for preserving and studying history.

A film crew from Winnipeg is following up on the lives of three steam locomotives that operated in southeast Saskatchewan. The documentary, The Locomotives of Bienfait, is led by Bill Fraser, who has family ties to Bienfait and the coal mining industry. The film crew will be in the area this summer gathering footage and looking for people with stories to share.

The three locomotives in question operated until the end of the steam era, which effectively came to a close in Canada with the end of operations in Bienfait, in 1970.

Fraser’s grandfather was an electrician born in Bienfait who moved around with the coal mines, working in the area, including Taylorton.

“When I was a kid, we used to go there to visit my grandparents, and I used to see the (locomotive) that’s in Bienfait now. The 3522 used to go by,” Fraser said.

A few years ago he started doing some preliminary research online with no particular plan to document any of the information or shared stories for film.

In his research, he found out two other locomotives, which operated in Bienfait at the end of the steam era that had survived.

Most steam locomotives were scrapped. In the 1960s, they were worth more broken into parts rather than the sum of those parts.

“They weren’t as valued then as they are now,” Fraser said with a laugh.

“It’s unusual there are three from this one small area that survived.”

When technology and equipment becomes obsolete, it’s easy to discard it for what’s new. At the time of decommissioning, something like these locomotives is considered useless. Fifty years later, it’s considered a symbol of our historical and cultural identity. Once seen for its value as scrap material, the locomotives can now be viewed as works of art or links in the chain that connects our steady technological march forward.

Locomotive 3522 rests at the north end of Main Street in Bienfait. It was built by Baldwin Locomotive Works of Philadelphia in 1907 for the Canadian Pacific Railway, who later sold it to Manitoba and Saskatchewan Coal Company in 1956. It was operated in Bienfait until 1968. Its last trip brought it to its current location.

Locomotive 2166, built in 1905, resides at the Western Development Museum in Saskatoon. It was sold to the M&S Coal Company in 1949 and operated under the guise of No. 6166 during its time with the company.

Locomotive 6947, built in 1908 in Montreal is now owned by a collector in Sandon, B.C. It operated in Bienfait from 1959 to 1970. Donated to the Alberta Pioneer Railway Association, it was later sold to Sandon’s Hal Wright, who disassembled it, trucked it home and reassembled it piece by piece.

While those three machines are the main characters in the film, Fraser said the backstory examines the history of coal mining in southeast Saskatchewan.

“We want to talk about the history of coal mining and the struggle of the coal miners in the area,” said Fraser.

The film crew is looking for photos from the time, while holding out a slim hope they could stumble across film footage of the locomotives in action. They also want to interview people who have stories to share.

“One of the reasons I wanted to do it now was just so (it’s done) before it recedes further into history, and there won’t be anyone around who remembers anything about it. The chances now of talking to someone directly involved are fairly slim but still a possibility if they were young people at the time,” said Fraser.

Whether it’s about working on or with the steam engines or working in the mines, they are hoping there are memories and stories to find.

The crew will be filming an operational 2-8-0 engine in Summerland B.C. The engine is the same as Locomotive 3522 in Bienfait. That footage will help bring to life the sights and sounds of these locomotives that are otherwise static.

“One of the reasons that people have been around them and become attached to them is because of that. It’s an impressive sight. There’s something about them that appeals to people. I don’t know what it is or why. It just is,” added Fraser.

The crew is expecting to visit Bienfait in June to film the engine, and they will be returning to conduct interviews at various times throughout the summer.

“The locomotives are one thing, but we want people involved to help bring it to life,” Fraser said.

Those who may have any information or records, or who may have stories to contribute, are asked to contact Fraser at navionco@gmail.com or by calling 204-799-4426.

Juli Dzuba excited to be the first executive director for Estevan's new youth centre
Aug 4, 2021 6:30 AM