Big Eagle reflects on the contraction of the drilling rig fleet 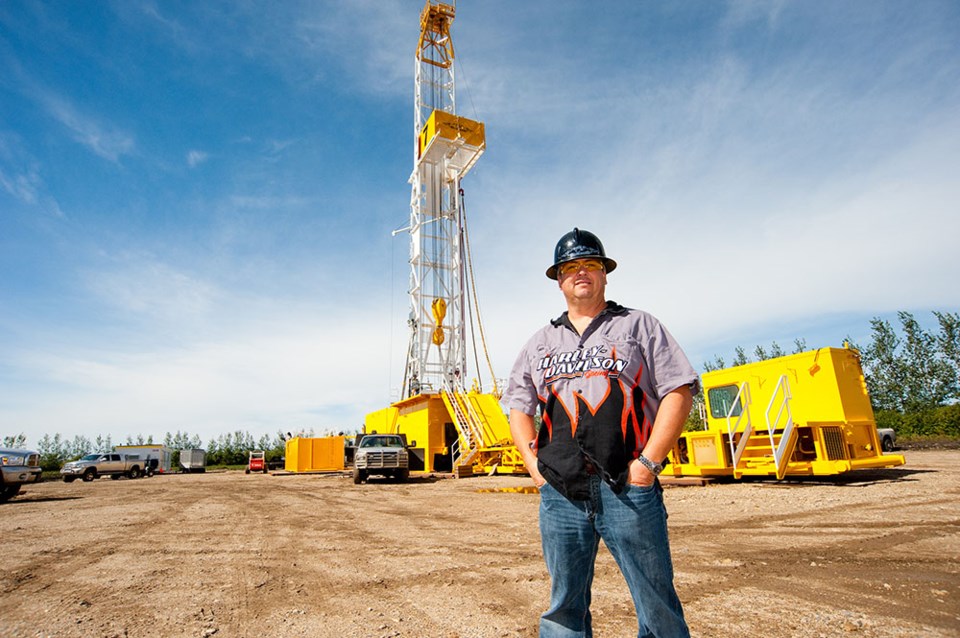 Derrick Big Eagle has been around rigs much of his life. This photo was taken in 2010, when Eagle Drilling Service’s Rig 7 was coming together. Not many new rigs are being built these days.Brian Zinchuk

Estevan – Derrick Big Eagle spent much of his life around drilling rigs. That included building and eventually selling his own rig outfit, Eagle Drilling Services, which had eight rigs. All this means he has a unique perspective when it comes to analyzing the massive contraction in Canada’s drilling rig fleet, from 811 in Oct. 2014, to 516 today. It could potentially drop another 100, according to the Canadian Association of Oilwell Drilling Contractors, or CAODC, in a recent interview.

Pipeline Newsquizzed Big Eagle about his thoughts on the drilling fleet on Oct. 24.

A lot of this contraction has to do with the fact that drilling rigs have become much more efficient. For instance, when asked how long it took to drill a Bakken well around Stoughton in 2008, Big Eagle said, “We were drilling them in seven to eight days.”

“Everyone’s pretty close now. You’ve still got a few of the guys that are still running their old rig that they have before because they’ve used them for 10 years. But could they be more efficient? Absolutely, they could be.”

Asked what has made the biggest difference in improving efficiency, Big Eagle replied, “The understanding of the PDC (polycrystalline diamond cutter) bit. The PDC bit came in as new technology for everybody. It took a while to figure out. And once a few people did trial and error, did a little research and development on drilling techniques and procedures, they figured out they could push it.

“Everybody thought it was just pump, pump, pump, and put the volume to it, but was really the drill bits that sped things up.

“And, the competitiveness. If you want to work, you’ve got to be the fastest.”

There are many rigs in Saskatchewan, and throughout Western Canada, that have been sitting since the downturn hit five years ago. Many more have been sitting even longer. Asked what he would look for if he were looking to buy and reactivate a “cold rig,” Big Eagle said, “Rig up time is No. 1. Is it set up to be rigged up and moved quickly? All of these (in southeast Saskatchewan) pretty much are.

“I would want to know the last time everything was turned, everything was fired up. When was anything pumped through the lines? Because now you’ve got everything full of rust. That’s including air lines. How do you get the rust out of air lines? You’re really taking a chance.”

If rotating gear has been sitting a long time without being turned, he explained that bearings can actually deform. He said, “Let’s say you’ve got a pump, and the bearing it is sitting on. This gear weighs 25,000 pounds, sitting on a couple of bearings. Eventually it’s going to squash them and make them flat. Now you’ve got to turn them and there’s a flat spot on that bearing. Knock knock knock. The bearing wears out, and you’ve got a chance of wrecking the whole inside of that pump. Now you’ve got shavings in it.

“Turning the equipment is really important. Seals, O-rings, air hoses, air lines. The elements are going to rot out the air lines and hydraulic lines.”

The weather combined with sitting is the problem. The depreciation, he said, is, “huge.”

One larger company, he noted, has a person whose job is to go around to their idle rigs and rotate everything that can turn, every few months.

Then there’s cannibalization of rigs to keep others going.

“It was the angle everyone was left in. When you’re working for $500 a day profit on a $9 million drilling rig, you’re not going to go to the store and buy yourself a $2,000 hose 2-inch hose, just because it makes it a little easier. You’re going to go to one of your rigs that you’ve got shut down and you’re going to take parts off of it because your trying to survive like that.

“But you have to draw the line in the sand.”

Is there a line where a rig’s been sitting too long?

“I think if there’s been a four to five year sit, you’re going to have a pile of problems hit you in the face when you start it up. Two years time; a little bit of rust here and there. You’ve probably got a little more time before bearings become flat. But you’re still going to have hose issues.

The CAODC recently increased the interval for a Level IV inspection from 1,000 operating days to 2,500 operating days. Big Eagle doesn’t agree with that, saying the operating pressures are so high now, there’s too much risk for intervals that long. “The rigs are being run twice as hard as they used to be. I 100 per cent disagree.”

And then there’s labour

“How are they going to draw the people back? You can get the rigs going, but what’s going to be their draw?” Big Eagle asked.

The ultimate fate of an old rig is to be cut up for scrap. He noted larger drilling companies routinely cut up their old rigs.

“There’s more value in eliminating a competitor, buying it, than what you get for scrap,” he said.

Is there a foreign market to take some of these idle rigs overseas? Big Eagle said there’s some interest. “I don’t think any have been successful,” he said, noting Alberta has hundreds more rigs to choose from, and they’re closer to a port, making those rigs more attractive.

The whole fleet in Canada is overbuilt. “We’ve got too many,” Big Eagle said.