Kipling School students and their families came together on June 12 at the Kipling School soccer infield to celebrate the graduation of 24 students from the school.
Jun 18, 2021 6:50 AM By: Laura Kish 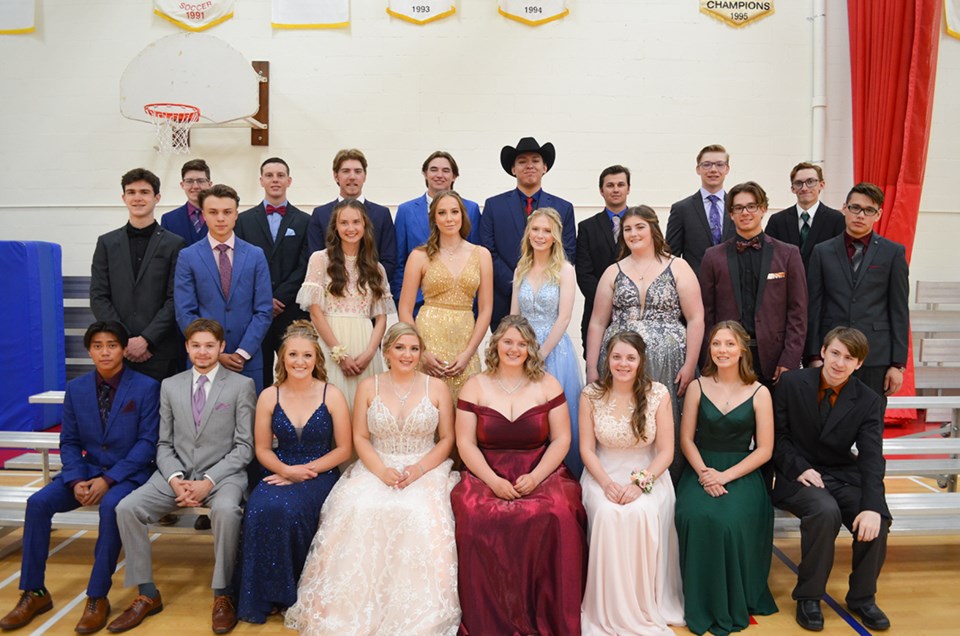 Donning their suits and gowns, the graduates were ushered in with their parents at their sides, walking down the aisle. Keeping with COVID restrictions the crowd was limited to immediate family members only.

Mistress and master of Ceremonies for the afternoon were Hanna Steele and Connor Box.

Rhett Larsen delivered a message from the staff, sharing some important memories with the reply coming from Levi Dayman and Shaw Heaton on behalf of the graduates. They acknowledged all their teachers for being there for them - from all their sports to field trips.

Graduation spotlights highlighting their future plans were given by Angela Corscadden and Garret Lowenberger.

The future seems bright for these new graduates as a number of them were awarded scholarships for post-secondary studies.

Angela Corscadden was awarded the PVSD Leadership Award, the Lorne Olver Memorial Award for $200 and the Chittronics Bursary for $400.

Bryson Andres was awarded the Kipling Royal-Pipestone Beaver Scholarship for $500 as well as the Knights of Columbus Bursary for $250.

Cammi Mytopher was presented with the Royal Canadian Legion Award for $200 and the John Mansuy Memorial Scholarship for $500.

The Andres Trucking Math Award for $250 went to Jaidyn Draper.

The Sue Long English Award for $400 went to Julia Toth.

Sarah Sproat and Julia Toth both received entrance scholarships for $1,000 at the University of Regina.

Cammi Mytopher and Joni Blaikie both received entrance scholarships for $1,500 at the University of Regina.

Jaidyn Draper received a $3,000 entrance scholarship for University of Regina.

The Saskatchewan Youth Apprenticeship Industry Scholarship for $1,000 was awarded to Logan McCarthy.

Finally, the Governor General’s Medal from 2020 was awarded to Irelend Biette who had an overall average of 92.27 per cent.

Principal David Bircher extended his congratulations to all graduates and shared some great memories.

The valedictorian address was given by Jaidyn Draper followed by a video presentation.