Speeches, a march, signs and supportive applause were all part of a Peaceful Freedom Rally held Saturday afternoon at Torgeson Park. About 120 people gathered for the demonstration.
Sep 16, 2020 12:34 AM By: David Willberg 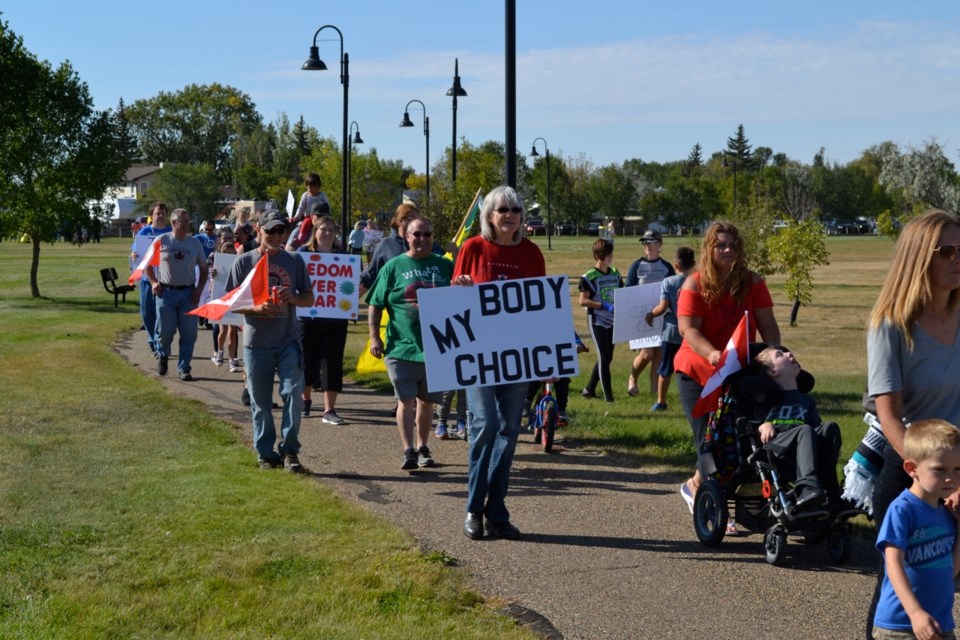 Participants in the Peaceful Freedom Rally march down the path at Torgeson Park as part of the event Saturday.

Speeches, a march, signs and supportive applause were all part of a Peaceful Freedom Rally held Saturday afternoon at Torgeson Park.

About 120 people gathered for the demonstration. While the mandatory use of masks in businesses and schools was the focus of a lot of people’s attention, the ongoing COVID-19 pandemic was also discussed at length.

Wade Sira, who is the leader of the recently formed Buffalo Party of Saskatchewan (formerly the WExit Saskatchewan Party) also spoke at the event. He had already been scheduled to be in Estevan for a meet and greet.

The speeches lasted more than an hour, and then about half of those who attended embarked on a walk past No Frills and Walmart – two businesses whose national head offices are requiring customers to wear masks. After returning, the crowd went on their way.

Lauren Packer, who organized the event with a couple of friends, said the rally went really well. She was pleased with the attendance and the messages from the speakers.

“Everybody stayed safe and there was nothing not peaceful about it,” said Packer.

She noted that during the march, they came across two facemasks that were discarded on the ground – a moment that stuck out for a lot of participants.

“We stopped at Walmart for a bit so the videographer and the photographer could take some pictures, and then we turned around and returned to Torgeson,” she said.

Packer believes the event succeeded at conveying its message. People she has talked to found it very informative, and the speakers were effective.

Wempe was the creator of a petition, along with Liana Gill, that generated 2,500 signatures on change.org, calling for the South East Cornerstone Public School Division to make masks optional for their schools. That petition was going to be circulated at the rally before it was removed from the website.

Wempe noted it can be found on the iPetition website. There is a meeting scheduled with the Cornerstone board on Sept. 16, which she finds encouraging.

She said she wants choice on masks.

“We as parents want to be brought into the discussion, because ultimately they are our children,” said Wempe.

She also pointed out that just one child has died of COVID in Canada in six months. And she’s concerned about children wearing masks all day without a break.

Wempe said people in Estevan have courage, they’re tenacious and they always have hope when they come together as a community.

Trobert said he doesn’t fear COVID-19; rather he fears people are losing individual freedoms for safety.

“While the issue of masks is the most visible and tangible flashpoint in our present discourse about the erosion of our rights during this pandemic, I’m not here to talk about whether masks are effective or not,” he said.

Rather, Trobert said he was there to discuss people’s legal rights, and what they can do about it.

Trobert argued the government has not used the least restrictive measures to combat the virus, and that the mantra of public safety has subverted individual rights.

He pointed out that the number of people who have died from COVID in Saskatchewan is lower than vehicle collisions, suicides and children who have died while in the care of the system.

Trobert went on to argue that southeast Saskatchewan is not a densely populated area, and it shouldn’t have the same restrictions as Toronto or Vancouver.

“This is Saskatchewan, a place filled with common sense and hard working people,” said Trobert, who encouraged those in attendance to think critically and to support local businesses not requiring masks.

Smart spoke about her mental health experiences during COVID. She told the audience that she battled mental health in the past, but her health improved, and she was doing well until last fall.

“I had reached out for help again, as I could feel that old darkness creeping back into my thoughts. I didn’t really talk about it with people, because obviously that’s very hard to do. So I just carried on,” Smart said.

Smart had put her name on a wait list for help, but when COVID hit, the wait list was cancelled. She thought she would be OK, but the pandemic exacerbated the situation as she tried to navigate family needs, distance learning and more.

It’s required a lot of work to remain all right mentally.

“I have to constantly self-talk, focus hard on breathing and calming myself. This happens especially when I wear a mask, and it induces extreme panic. I assure you this is a very real condition. This is not an excuse that some people make up.”

Smart reached a better place by accessing help available from professionals, talking to people, being open and honest, and realizing it’s all right to put the needs of her family first. She asks critically when things don’t make sense.

Now she’s concerned with how kids will cope with the stress of back to school, and not having sports, extracurricular activities and music programs.

Packer said there has been talk of having another rally, but she wants to take a break, because organizing the rally was a lot of work for her and her friends. A few people suggested having it each week, but Packer would like to see those who reside in the city take the lead, as the organizers live outside of the city.