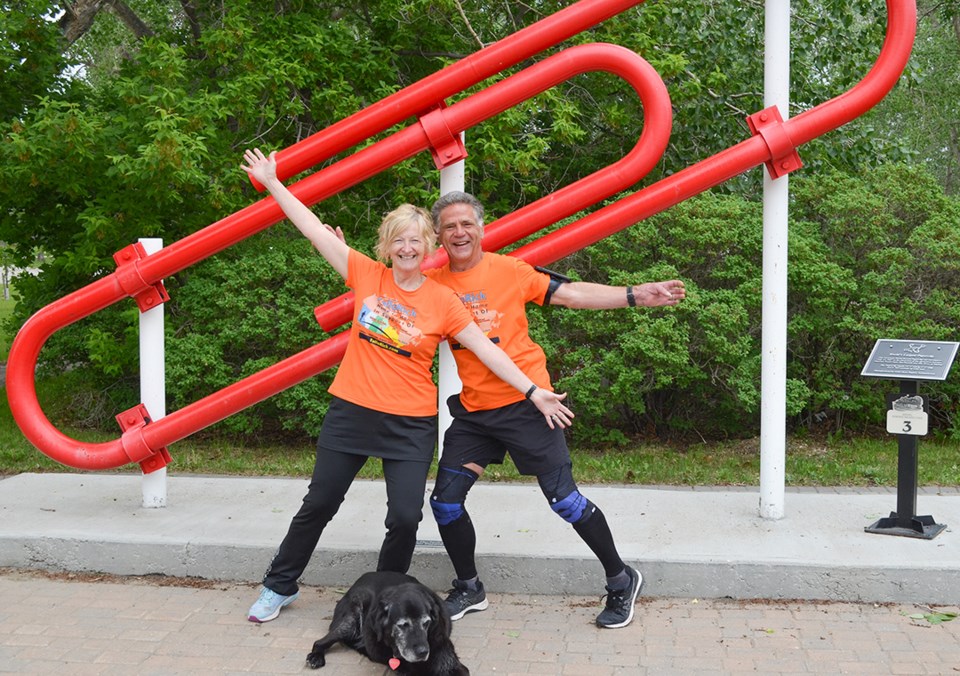 Rick Fall, 61, plans to log 4,200 kilometres, which is actually 100 marathons in 100 running days, raising money for two charities along the way.

Fall is teaming up with Make a Wish Canada and Childhood Cancer Canada in his journey across Canada in hopes of raising $300,000.

Fall started his journey back on April 12 in Victoria, B.C., where he grew up, and hopes to finish by mid-August back in his hometown of Sault Ste. Marie, Ont., hence the name Home to Home tour. Coincidentally the start date is the same date that Terry Fox started his run in 1980.

His wife Colette is driving the RV while he's hitting the road.

The retired teacher says he’s been running pretty near all his life. He took some time off during his early 20’s then got back into a fairly regular running routine in about 1990.

“In 2010 my wife and I got involved with the local Terry Fox Run in Sault Ste. Marie,” Fall explains. “It was mentioned amongst a group of us that maybe we’ll do a run or continue Terry’s run from Thunder Bay to the Coast. It always stuck in the back of my mind that maybe I’ll do something like that one day when I still think I can.”

“Terry Fox is one of the biggest influences for me to do this run,” explains Fall. “But also a number of other guys that have ran across Canada as I met them when they came through Sault Ste. Marie. I would run with them. One in particular is Jamie MacDonald from England. He’s done a number of different treks.”

Originally, Fall had planned to begin the run in 2020, but the start of the COVID-19 pandemic postponed it by a year.

“I thought I’d start from my original hometown of Duncan, B.C. We drove to B.C. and started from Victoria, up and down through the Rockies, and across the flatland of the Prairies … It’s been such a journey.”

Fall took a detour off the Trans-Canada Highway in Saskatchewan to visit some old family friends along Highway 48. He and his wife spent the night visiting with Gordon and Donna Hassler on their farm just outside Windthorst. Fall’s father used to work for Gordon’s dad, Pete, years ago and the families have kept in contact ever since.

From there he continued on his journey through Kipling, Kennedy and Wawota, getting back to the No. 1 Highway at Virden, Man.

A couple of days when the weather was forecasted to be above 30 C, Fall hit the pavement long before the birds were chirping at 3 a.m., finishing by 9:30 a.m. for the day.

Fall runs whether the sun is shining or it’s pouring rain, 10 C or 30 C, windy or dead silence, averaging approximately 42 kilometres per day. They are both enjoying sightseeing along the way.

Fall says he always has three pairs of running shoes on the go, rotating them as he goes. Shoes need a rest day as well.

“I’ve retired two pair so far,” explains Fall. “I try to get 800 to 1,000 kms out of a pair of runners. ASICS were good enough to sponsor me for the brand and model that seem to work for me. They gave me eight pair of running shoes.”

Rick and Colette Fall have had some very memorable experiences so far including:

Forty-two kilometres of straight highway with not even one bend,

From Victoria to Mill Bay was quite a feat to do,

On Vancouver Island, they had a lot of family and friends support where some rode their bicycles with Rick the entire way,

Going through Vancouver, the four monuments of Terry Fox. “It still brings tears to my eyes standing with my arm around the life-size statue of Fox. It’s a huge inspiration.”

Through the Fraser Valley, it was beautiful the whole way.

One instance that stands out was meeting up with a grizzly bear while going through the mountains by Roger’s Pass.

“I was forewarned about this bear from a traveler going the opposite direction. The next morning I just got started and I see a huge black bear.”

“The scenery of going through the mountains was breathtaking, taking in the cascading waterfalls and snow in the mountains and it is so peaceful at times. Every step of the way I hear the nature.”

Fall is over half way home and to date, approximately $50,000 has been raised through Fall’s marathon.

Watch for Fall along the highway wearing the bright orange shirt.

You can follow Rick on his Home to Home journey at Fallorick.com – click on the tracking link ‘Where is Rick now?’ Online donations can also be made.