The two local atom hockey teams in the Saskatchewan Female Hockey League dominated their games this past weekend. The Estevan Bearcats went 3-0, and outscored their opponents 21-5. They defeated the Southwest Cyclones 9-2 and 12-2 on Jan.
Jan 11, 2019 12:01 AM By: SaskToday 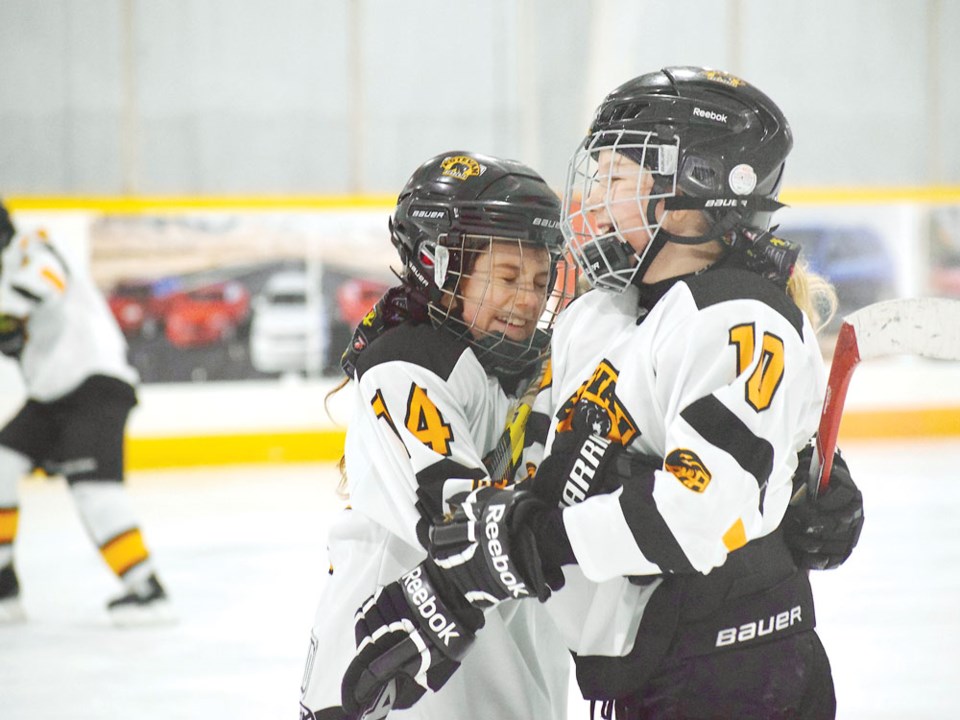 Alexis Williamson (10) and Presley Hollingshead (14) from the atom Bearcats celebrate after scoring on Saturday. Photo by Ana Bykhovskaia

The two local atom hockey teams in the Saskatchewan Female Hockey League dominated their games this past weekend.

The Estevan Bearcats went 3-0, and outscored their opponents 21-5. They defeated the Southwest Cyclones 9-2 and 12-2 on Jan. 5, and the Weyburn AtoMc Gold 6-1 the following day. All three games were played at the Power Dodge Ice Centre.

The Bearcats record is 10-3. They will visit the Southwest Cyclones in Gull Lake and the Swift Current Thunder on Jan. 12, and then face the Estevan Senchuk Bearcats on Jan. 13 at Affinity Place at 1:15 p.m.

The Senchuk Bearcats, meanwhile, improved their record to 9-6-1 with an 8-2 win over the Weyburn AtoMc Gold on Jan. 5 and an 8-1 win over the Cyclones the following day. Both games were also played at the Power Dodge Ice Centre.

Their upcoming game against their Estevan rivals is their next contest.

(Box scores for the two games were not available).

The Estevan peewee Bearcats dropped a 4-2 decision to the host Ochapowace Thunder on Jan. 5.

The game was tied at 1-1 after the first period, with Kaylin Wilhelm scoring for the Bearcats. But the Thunder scored three times in the second period to take a 4-1 advantage after 40 minutes.

Lauren Hassler tallied for Estevan in the third to round out the scoring.

Riley Scott was in goal for Estevan, whose record stands at 5-8.

Estevan will host the Thunder on Jan. 11 at 6:30 p.m., and the Moose Jaw Mavericks the following day at 5:45 p.m. Both games will be at the Power Dodge Ice Centre.

The Estevan bantam Bearcats played the Prairie Storm to a 2-2 tie in Emerald Park on Jan. 6.

The Storm scored late in the first period, and held a 1-0 lead until midway through the third period, when McKenna Walls scored to tie the game. The Storm responded nine seconds later to take the lead again, but Kamri Olfert’s goal with 5:41 to play tied the game again.

Emmey Rae was the goalie for the Bearcats.

The draw left the Bearcats with a 4-9-3 record. They were scheduled to visit Weyburn Creekside on Jan. 9. (Results were not immediately available).

The Carlyle Wildcats are still looking for their first win of the season, and they came up against the Regina Renegades, the best team in the Saskatchewan Female Hockey League’s midget A division, on Jan. 5 in Carlyle. The Wildcats had a great game, but dropped a 4-3 decision.

The Renegades scored 1:52 into the first period, and led 2-0 after the first. Courtney Roppel scored for the Wildcats 44 seconds into the second to pull within one, and Kassidy Johnson’s goal 47 seconds into the third tied the game.

After the Renegades scored twice to restore their two-goal advantage, Kaymenn Fawcett scored with 6:36 to play to make it interesting, but that’s as close as the Wildcats would get.

Kaili Adams was in goal for the Wildcats, whose record is 0-12-3.

The Goldwings jumped out to a 2-0 lead in the first three minutes of the game on goals by Kaycee Mullinger and Karleigh MacKenzie, and added three more goals before the end of the first period when Taylor Rooney, Alyssa Ohrt and Marci LeBlanc scored.

Bailey Farr scored in the second period to extend the lead to six, and Jordan Meyers’ goal in the third finished the scoring.

Kara Zelyck was in goal for the Goldwings to get the shutout.

The Goldwings lead the midget AA South Division standings with a 12-1 record. Their next two games will be in Midale against the No. 2 team in the division, the Regina Rebels.