Goldwings face the best at Wickfest

The Southeast midget AA GoldWings went winless at the Hailey Wickenheiser Female World Hockey Festival from Nov. 22-24 in Calgary, but it was still a great experience and a chance to come together as a team.
Nov 29, 2019 1:00 AM By: SaskToday 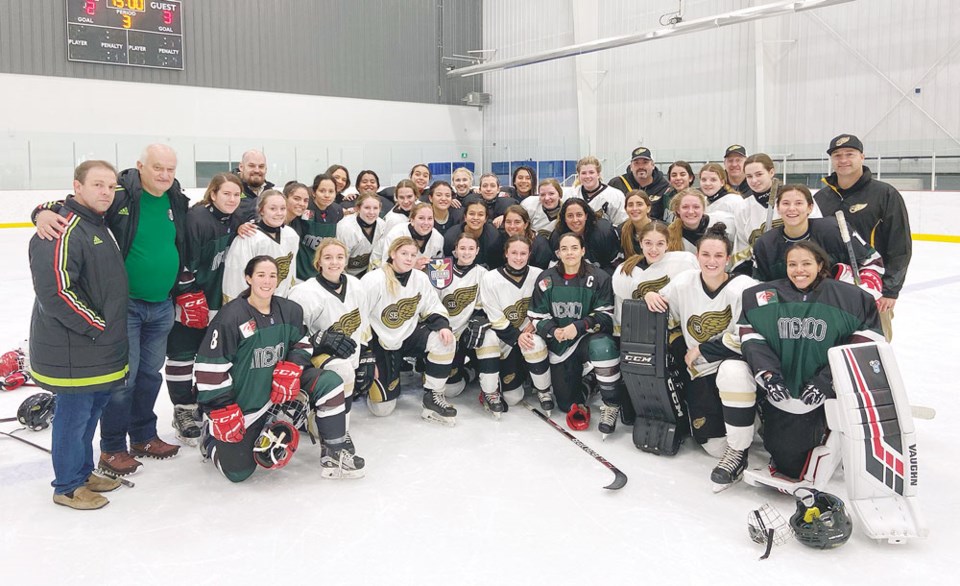 Members of the Southeast Aaron Well Servicing midget AA Goldwings gather for a group photo with their opponents from Team Mexico following their game at the Wickfest hockey tournament in Calgary. Photo submitted

The Southeast midget AA GoldWings went winless at the Hailey Wickenheiser Female World Hockey Festival from Nov. 22-24 in Calgary, but it was still a great experience and a chance to come together as a team.

The GoldWings were 0-4 at the tournament, known as Wickfest. Competing in the elite division, they opened the tournament with a 3-2 loss to Team Mexico’s under-18 national team. Khloe Bedore and Marci LeBlanc scored for the Wings.

“For most of the girls, it was the only international competition they’ve ever had,” said coach Al Ohrt. “They were quite nervous, because nobody knew what they were going to be like. It was their (Mexico’s) first game here, and they looked a little bit mixed up right at the start. We got a goal, and I think the girls kind of relaxed a little bit.”

Mexico had a very good power play and their team was pretty good in the offensive zone.

“We had lots of chances at the end to tie it. We pulled our goalie and I think we hit a crossbar near the end of the game.”

A parent of one of the GoldWing players knows the people with the Hillberg and Berk jewelry company, so Hillberg and Berk supplied red sparkling earrings for all of the Mexican players to welcome them to Canada.

The GoldWings next game was a 4-2 decision against the Edmonton Pandas, with LeBlanc scoring both of the Southeast goals.

“We were a little bit off from that point on. We were just off. We didn’t play our best hockey. I think we could have beat Edmonton,” said Ohrt.

Then they lost 4-1 to Calgary White in their third game, with McKenna Walls scoring the goal, and 8-1 to Calgary Red, with Bedore scoring for the Wings.

“The penalty kill, other than the last game, was really good. We worked on that. Our power play is definitely something we have to work on.”

Orht said the first period versus Calgary Red was likely the GoldWings best period of the tournament. It was a rough game, and Calgary Red scored six power play goals in that contest.

There were also opportunities to come together as a team by participating in go-cart races and a trip to Banff.
“The team was the best part about the trip, and hopefully they’re ready to come back and start up again on Saturday,” said Orht.