A semifinal berth was as far as the Estevan Comprehensive School Elecs junior girls volleyball team would go at the Saskatchewan High Schools Athletic Association (SHSAA) district championships in Moosomin on Thursday.
Nov 18, 2015 3:30 AM By: Jamie Harkins 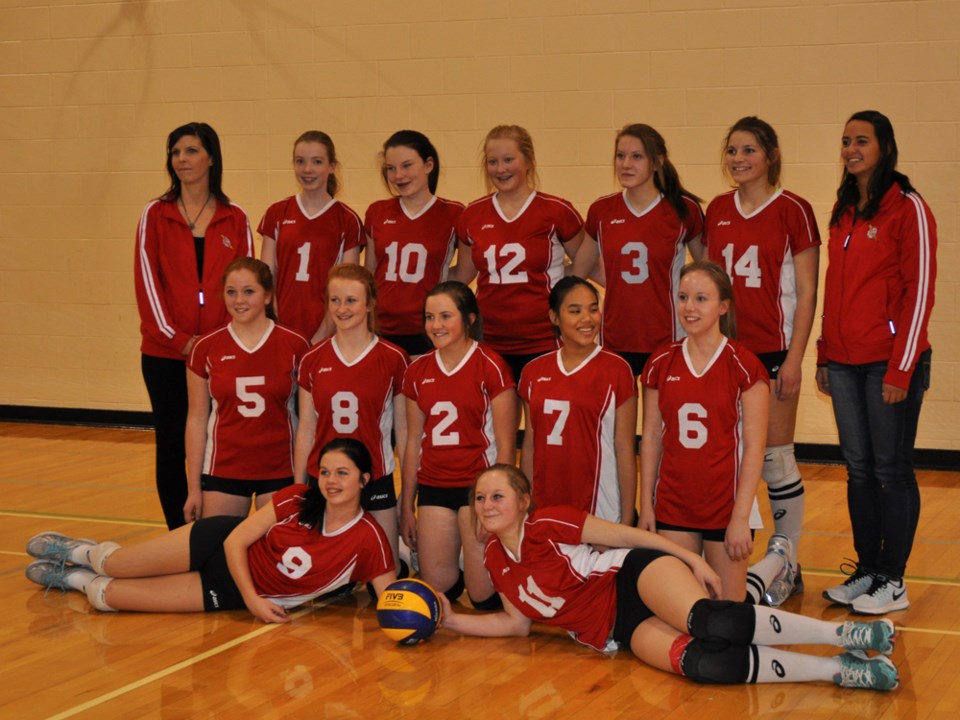 A semifinal berth was as far as the Estevan Comprehensive School Elecs junior girls volleyball team would go at the Saskatchewan High Schools Athletic Association (SHSAA) district championships in Moosomin on Thursday.

After placing second in their pool, the Elecs crossed over in the first playoff round to face the Redvers Rams, who finished third in their pool. Estevan butted the Rams 25-1, 25-7 to set up a match with the Weyburn Junior High Cobras in the semifinal, but in two close sets the Cobras slithered away with a 25-18, 25-21 victory.

Melissa Holman, head coach of the Elecs junior girls volleyball team, said Weyburn featured a roster comprised of some hard hitters and the Elecs did manage to return the shots against, but unfortunately their digs for the most part went straight back over the net. She said this caused a problem as they weren’t able to develop a counter-attack.

“We were digging extremely well,” she said. “Every time they would hit something at us we would get it back, but they were just offensively outnumbering our hits. Our girls were playing very well strategically placing the hits and the tips in very good spots.  When we were able to make an offensive move we would be very successful, but we were not getting to set up as many hits as we would like.”

Holman said the Elecs had a great shot of making the final if things had gone differently for the team in the early goings of the tournament. She said an early round-robin loss to the Weyburn St. Michael’s Tigers caused in part by the girls’ unfamiliarity to the small confines of Moosomin’s gym led to them finishing second in their pool and having to face the Cobras earlier than they wanted.

“It would have been a tough final regardless of when we played them,” she said. “Weyburn (Junior High) is a very good team, so it could have gone either way, but I do believe that our girls deserved to be in that final. It was unfortunate that we lost in the semis, but they did play well.”

The Elecs players each set a goal for themselves at the beginning of the season and the coaching staff attempted to run practices in a way that these goals could be realized. In an effort to further advance the girls’ involvement in volleyball, the Elecs were also placed in tournaments throughout the season that challenged the team to be better.

“They came quite far as a team and a lot of them, things they couldn’t do very well at the beginning of the season they mastered over the three months,” she said. “They’ve had a very successful season.”