Kids getting their kicks in at soccer games

The Estevan Youth Soccer Association is pleased that the youths registered through its programs are able to play games again.
Jun 23, 2021 12:46 AM By: SaskToday 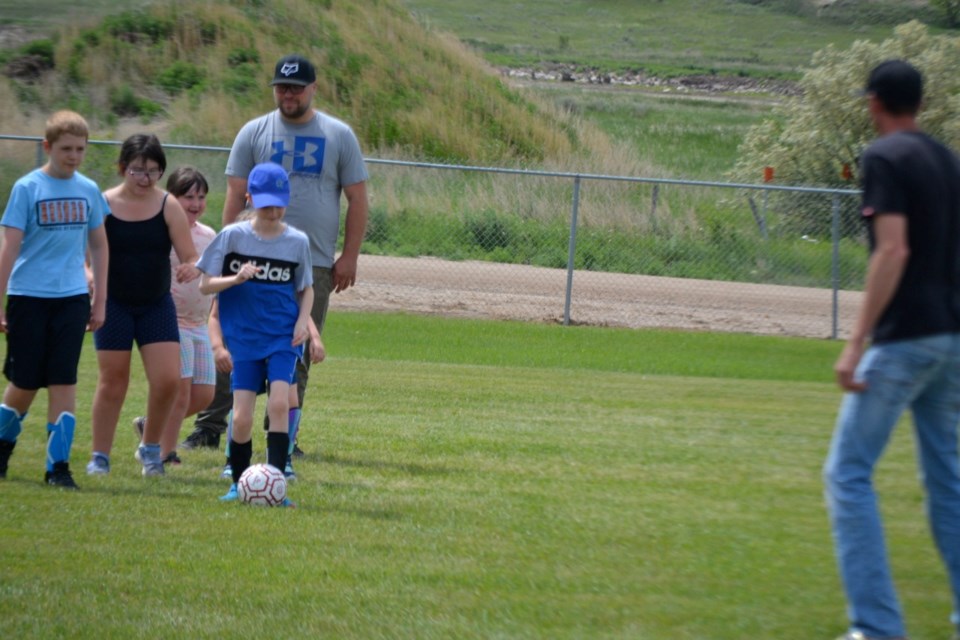 The Free to Be soccer program practised on Saturday morning.

The Estevan Youth Soccer Association is pleased that the youths registered through its programs are able to play games again.

Stacy Murphy, who is the association’s president, said they had a late start to the season to ensure they had all the proper guidelines in place.

Practices started in the second half of May, and then last week, they had their first games of the season.

“Now that things have opened up, we’ve got a plan in place and they’ve been playing games now, in addition to practising for a little bit,” said Murphy.

The final day of the season is scheduled to be July 12, which is a few weeks later than normal.

Approximately 100 kids are registered this year, with several different age groups. A Free to Be program and a parent and tot program are on Saturdays. There are two under-five groups, with one on Mondays and one on Wednesdays, and two under seven groups, also on Mondays and Wednesdays.

Under-nine, under-11 and a 13-15-year-old group are also offered. All of their practices and games are at Cactus Park.

The number of kids registered is down this year, and Murphy suspects that’s due to hesitation by some parents to have their kids participating during the pandemic.

But the association is excited to be offering soccer this year. Last year youth soccer had to cancel its season due to challenges associated with the pandemic.

It took a lot of work to make the season happen, but it’s been great to have the kids out there playing.

“You can see that they’re excited to finally be out and being able to participate in sports,” said Murphy.

The opportunity to play games has added to the kids’ level of excitement.

A decision has not been made about having age rep. teams for this season. There would traditionally be that option for U11 and for the 13-15 age groups.

Some teams surrounding Estevan are interested in playing games with the older age groups.

Murphy said the association appreciates the patience and support from parents and the community, and they’re thrilled to see kids out there and playing soccer again.