The Southeast A’s U15 AAA baseball team, which boasts players from throughout the region, remain perfect this season. The A’s won all four of their games on the weekend to improve their record to 6-0.
Jun 21, 2021 3:29 PM By: SaskToday 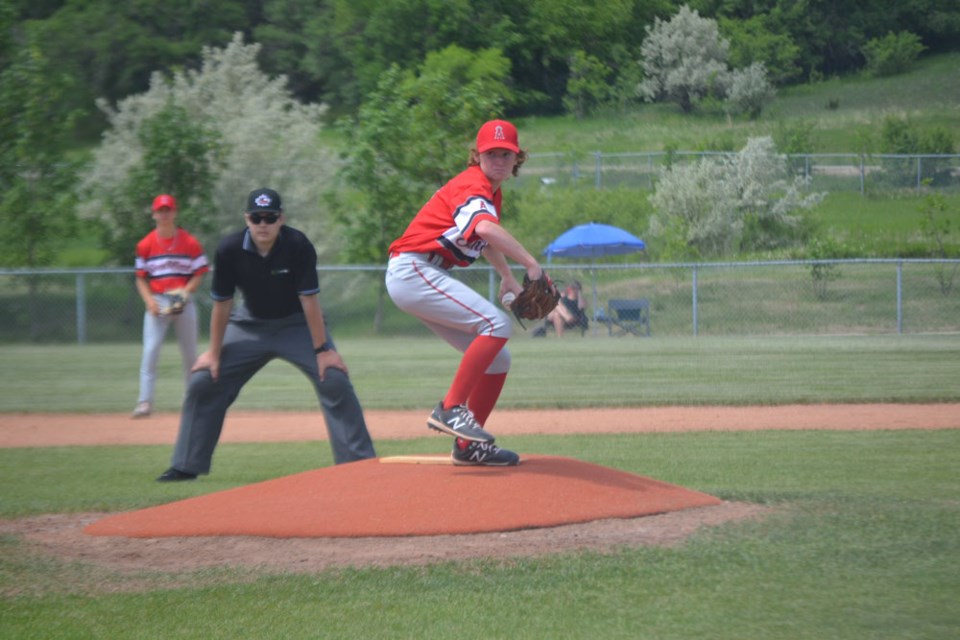 Sutter Baily was on the mound for the Southeast A’s U15 AAA baseball team on Saturday.

The Southeast A’s U15 AAA baseball team, which boasts players from throughout the region, remain perfect this season.

The A’s won all four of their games on the weekend to improve their record to 6-0. They took two from the Moose Jaw Canucks on Saturday in Estevan, winning 8-2 and 6-5, and then swept two from the Regina Pirates, 12-4 and 4-2, on Sunday in Regina.

Kade Phillips had a great weekend, both offensively and on the mound, for the A’s. He hit three home runs during the four games, and pitched 6 1/3 innings to get the win during the second game Sunday.

Draven Naviaux hit a home run for the A’s Saturday.

The TS&M 13U AAA Estevan Brewers hit the road this past weekend for three league games. On June 19, the Brewers squared off against the White Butte Broncos in a doubleheader. In game one, behind strong pitching from starter Reese Copeland, the Brewers won 10-9. Copeland also led the offensive charge with two hits and two runs batted in (RBIs).

The Brewers carried that momentum into the second game for a 9-8 win. Broden Henry went five strong innings as the starter. The offence was led by Porter Crossman and Jaxon Kuchinka who each had two hits and two RBI’s.

The following day, the Brewers faced the Regina Expos and won 12-8. Starter Jaxon Kuchinka went four innings and had three hits, as did Broden Henry. Reese Copeland hit his second home run of the season.

Next action for the U13s is at home June 26 versus the Regina Buffalos and June 27 versus the Weyburn Beavers. Games are at 1 and 4 p.m. at Cactus Park.

The Estevan U18 AAA Brewers most recent game was a 7-5 loss to the Weyburn Beavers on June 17.

The Brewers led 3-0 entering the bottom of the fourth, but then the Beavers scored thrice and added four in the fifth. Colby Cuddington had two RBIs for the Brewers.

The Brewers will visit the Moose Jaw Canucks for a doubleheader on June 26, and then host the Parkland Expos on June 27. The games against the Expos will be at 1 p.m. and 4 p.m. at Lynn Prime Park.

The Southeast Performance Pump U18 AAA Twins went 1-4 the past week, losing 8-5 to the Moose Jaw Canucks on June 17, dropping both ends of a doubleheader to the Sask5 Giants on June 19 (9-8 and 15-5), and splitting a doubleheader with the Northwest Prairie Pirates on June 20, winning 7-6 but losing 12-10.

The Twins trailed 5-0 to the Canucks through two innings, rallied to tie the game in the fifth, only to give up three in the sixth. Callum Hollinger had two hits and two runs for the Twins.

In the first game against the Giants, the Twins had a 6-5 lead entering the bottom of the seventh inning, but gave up the tying run. Then they scored two in the eighth, only to have the Giants score three to win.

Carter Beck had two hits and two runs for the Twins.

The Giants scored five times in the second game, which only lasted five innings.

In the win over the Pirates, the Twins scored twice in each of the fourth, fifth and sixth innings to rally from a 6-3 deficit. Dylan Frey had three hits and Levi Cooley scored three times.

The Twins trailed 10-2 through three innings and 12-3 entering the seventh of the second game, then plated seven in the seventh and final inning to nearly mount an incredible comeback. Cooley had two RBIs and two runs to go with his two hits.

Callum Hollinger gave up six runs in four innings of relief, but only one run was earned.

The Twins next games are June 27 at the Swift Current ’57s.