Speedway looks forward to large crowds in the stands

The Estevan Motor Speedway is looking forward to having a lot more fans in the stands, and to having one of its biggest programs of the year.
Jul 9, 2021 7:00 AM By: David Willberg 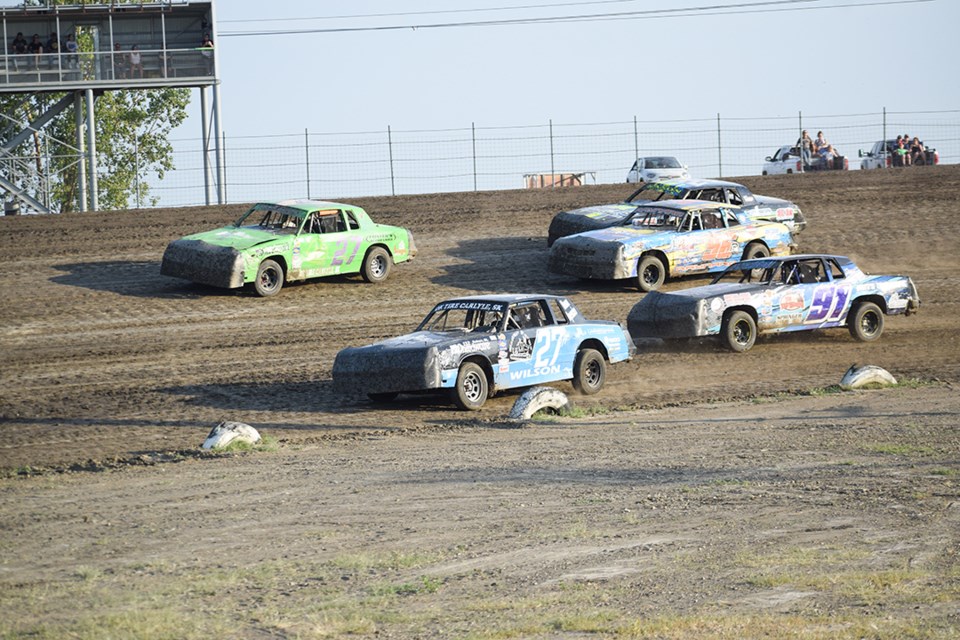 Mike Wilson (27), Kruz Wilson (27JR) and Diezel Raynard (96R) are among the drivers from the Carlyle

The Estevan Motor Speedway is looking forward to having a lot more fans in the stands, and to having one of its biggest programs of the year.

The speedway will have a doubleheader program on July 16 and 17 – the first programs after the provincial government is slated to lift all COVID-19 restrictions on July 11.

It means the speedway can have 1,500 fans in its main grandstand, compared to the 150 it has been limited to since the start of the 2020 season. Fans won’t have to wear masks, either.

It will also be the speedway’s annual late model programs. In a normal year, the late model show would be their second-biggest race program of the year, trailing only the Dakota Classic Modified Tour. But the mod tour won’t be at the speedway this year.

“It makes it even more special that it’s one of our more attended events,” said Estevan Motor Speedway vice-president Brad Pierson. “We’re just excited that we’re going to be restriction-free.”

People love the late models and they come from a great distance to watch them compete. Pierson has received messages from people in Moose Jaw, wondering about ticket availability.

Drivers are scheduled to come from throughout Saskatchewan and into Alberta for the race program.

Spectators will also be watching from their vehicles along the south and the west fences of the track. About 100 cars can fit along the fenced area.

“That’s a different experience in itself,” said Pierson. “It gives the people the ability, if they have a small family, it’s … almost like their own private little party out there in the vehicle,” said Pierson.

There will be people watching from the grandstand in the pit area.

The other classes at the track – slingshots, hobby stocks, stock cars, sport modifieds and modifieds – are also schedule to be part of the program.

Food trucks have been a big part of the speedway’s success during the past year, and add to the experience. The track’s concession has been closed since the start of the 2020 season.

They’ve worked with the speedway to have food like hamburgers and hot dogs, in addition to their traditional menu items.

Pierson stressed that you don’t have to be a big racing fan to enjoy a night at the races. They’re trying to promote the experience of going to the event and the social element.

“People are loving our food trucks. People just love the outing the speedway brings. We’re trying to sell the speedway as so much more than racing,” said Pierson.

Drivers listed as being from the Observer’s distribution area who have raced at the track this year include:

Fans get the ability to interact with drivers after the races in the pit area. Competitors will sign autographs, and kids get to meet their favourite drivers.

The track is much more than Estevan as well. They get a healthy contingent of Weyburn drivers, and entrants from communities throughout the southeast corner.

“I look at it as almost a regional speedway. It incorporates a big part of southeast Saskatchewan,” said Pierson.