This year has been the worst the Canadian oil industry has seen in modern times when it comes to drilling, and next year isn’t looking a whole lot better.
Nov 19, 2020 7:00 PM By: Brian Zinchuk,Local Journalism Initiative Reporter 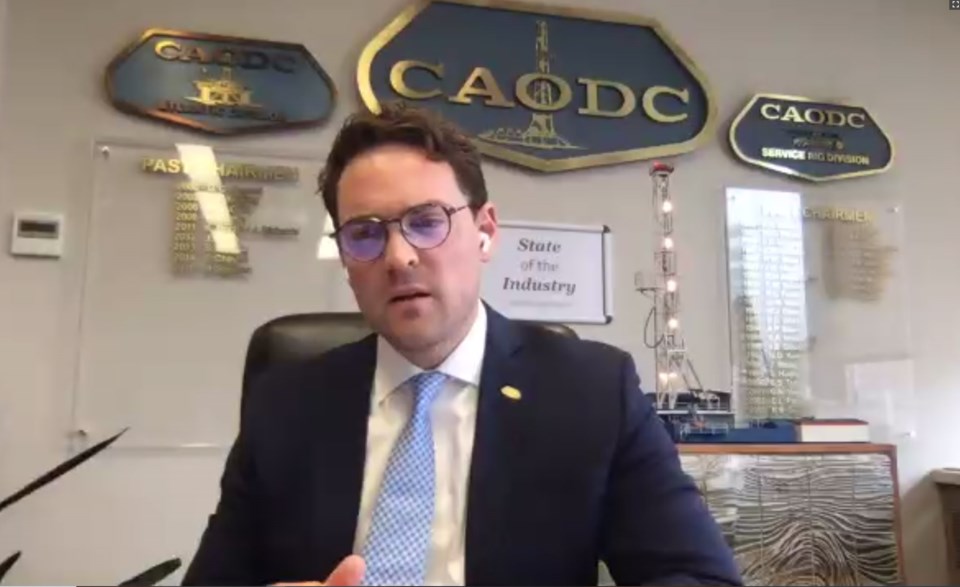 CAODC president and CEO Mark Scholz used to announce these annual forecasts in more posh settings. This year, the annual forecast was presented over Zoom. Screen capture via Zoom

This year has been the worst the Canadian oil industry has seen in modern times when it comes to drilling, and next year isn’t looking a whole lot better.

In its annual forecast for the coming year, released Wednesday, the Canadian Association of Oilwell Drilling Contractors (CAODC) expects next year won’t be the worst, but it’ll likely be the second worst.

The numbers are not broken down by province, but CAODC president and CEO Mark Scholz said by phone from Calgary that historically Alberta accounts for 65 per cent, Saskatchewan gets 25 per cent, and the remaining 10 per cent is split between British Columbia and Manitoba. However, with stronger natural gas prices propelling activity in gas-rich British Columbia, that may change the balance.

“We think there’s probably going to be a fairly big upside for B.C, parts of the Montney. And really driving that natural gas story is pricing, has come together quite nicely for natural gas.”

He noted the price for natural gas has gone up from $1 per thousand cubic feet (mcf) to $3 per mcf.

The CAODC expects a continuing trend in the reduction of drilling rigs. By the end of 2021, they are expecting the fleet to shrink from the current 505 drilling rigs to 478.

He noted that even if double their expected forecast of rigs went to work in the first quarter of 2021, that would still leave about half of the fleet sitting.

“I think there’s still more room for thinning of the herd, when it comes to rigs,” he said.

They are also expecting to see a substantial number of service rigs cut from the fleet as well.

“I’m assuming about 100 rigs on the service rig side will come off our registry,” said Scholz.

There are currently around 700 rigs in the service rig fleet. He expects most of the shedding of rigs will come in the fourth quarter this year and first quarter next year.

One of the reasons for this includes rigs being no longer marketable. Scholz said,

“The other reason, which again, is more concerning, and I think it highlights the plight of the industry, is the fact that a lot of our companies don't have the financial resources, and can't raise … sufficient capital to actually recertify this equipment.”

He said some equipment is houred-out, and until there’s an indication of robust activity in the future, it’s hard to justify putting money into recertifying equipment.

The higher natural gas price, as well as the Accelerated Site Closure Program, are upsides. He noted Saskatchewan is receiving $400 million under the $1.7 wellsite abandonment and reclamation program.

“We do have some guys that are working under that program,” he said.

With the Trans Mountain Pipeline and Coastal GasLink Pipeline under construction in British Columbia and Alberta, that’s another positive sign. The Keystone XL pipeline, while under construction, is under threat as U.S. President-elect Joe Biden has said he would cancel it.

Scholz said he’s a little more optimistic than others regarding Keystone XL, as there are a lot of jobs involved and that will be important, noting that what’s said in an election may be different than how one governs.

Scholz said it’s important to temper this forecast as there is still a “tone of market volatility and uncertainty out there.”

A key one is the impact of the COVID-19 pandemic, and the possibility of two vaccines in short order that may help resolve the issue. Lockdowns due to the pandemic are another factor, especially on oil demand.

How closely the Organization of Petroleum Exporting Countries and its allies create discipline in the market to get through this next period of market uncertainty is important, he said, noting, “We are very much dependent on them to keep pricing at that US$40 to US$45 benchmark.”

Scholz said that US$50 per barrel for WTI is the next pricing level where oil companies are likely to deploy more capital.

“Forecasts are like political polls, they last a very short time, and our assumptions may change,” he said, noting the industry could end up singing AC/DC or the blues.

“The Canadian energy industry is at a crossroad unlike anything we have ever experienced,” Scholz said.

Scholz also spoke of “creating something new and bold,” in reshaping the CAODC, noting it intends on broadening its mandate to create a more inclusive organization.

“In 2021, we will be introducing a new directional drilling division,” he said.