Stoughton – DFA Transport of Stoughton and Weyburn has pulled off something remarkable during this downturn. It grew, and did so substantially.
May 15, 2017 1:01 AM By: Brian Zinchuk 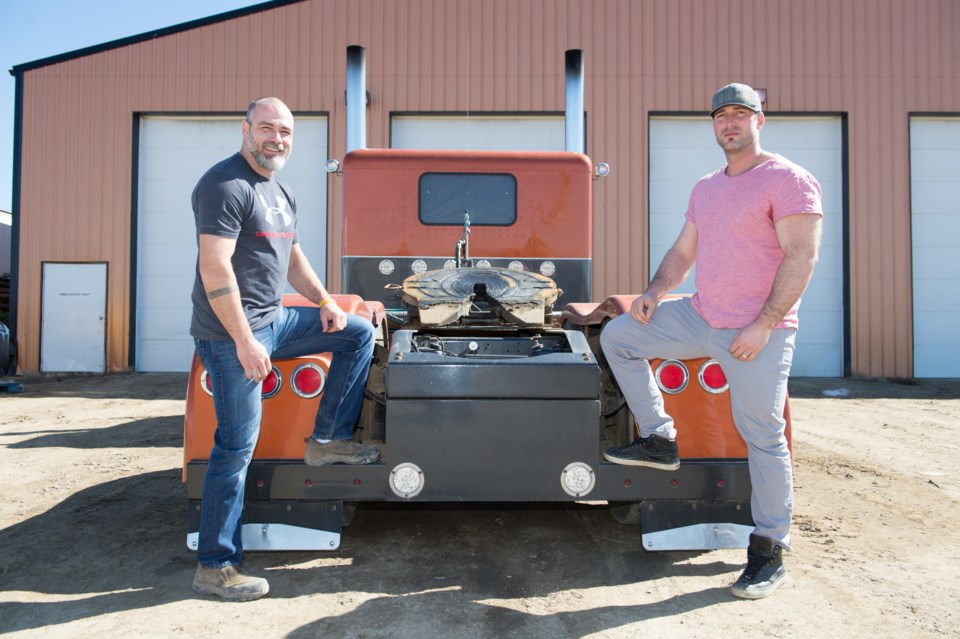 Brett Molde, right, owns DFA Tranport while Ryan Grant, left, is his partner in DFA Tire, which handles maintenance for the fleet as well as outside customers.Brian Zinchuk

Stoughton– DFA Transport of Stoughton and Weyburn has pulled off something remarkable during this downturn. It grew, and did so substantially.

As a rule of thumb, almost all oilfield services businesses Pipeline News has spoken to over the past year have seen their staffing levels shrink by roughly half compared to 2014, with only a few exceptions. A few have been lucky enough to stay static and keep all their employees. But DFA Transport grew by a factor of three during that time.

Brett Molde is the owner of DFA. He said, “We haul fresh water, produced water, flowback fluid and oil in a fleet of triaxle trailers.

“We do the fresh water on the completion side for fracking. Then on the production side, we do wells before flowlining.

“You get only so long hauling a well before they put it on line. The nice thing is, they’ve been drilling.”

The company has 50 units, 25 company trucks, and 25 leased operators. In total, roughly 65 to 70 people are employed by DFA. In 2014, they had around 15 trucks. “We tried to focus on quality of service,” Molde said. “As others cut prices, they got to a point where it wasn’t feasible.

While some other companies parked units that needed significant repair and pulled their plates, DFA focused on their maintenance. While they had a long, four-month spring breakup last year, he noted, “It really paid off after that.”

“Our quality, good guys stuck around. We maintained the iron.”

That was done through Molde’s other venture, DFA Tire, of which he is partners with Ryan Grant. DFA Tire is the maintenance arm of DFA Transport, but also does work for third parties. (See related story Page A10).

Things had slowed down for them. “It was scary,” Molde said. “It’s a mental battle, seeing other people’s iron going out.”

The company has been in operation since 2010, and operates between Stoughton and Weyburn. Their operations are concentrated in the Viewfield and Flat Lake plays.

They’ve been maintaining staff and preparing to be in a position so that when things did pick up, they were ready.

“The last few years have been steady. The last eight months, we have been busy. We’ve been lucky.”

For this year, he said, “I hope it continues in the direction we’re going. I hope we grow to keep up with demand.”

You can’t help but notice that Modle is a body builder. “I use the gym as my therapy, my hour a day,” he said.

He lives in Weyburn with his wife, a public health nurse, and four kids.

“We feel very fortunate to have the customers we have and we look forward to working with them in the future,” Molde concluded.