Drilling rig engines are still putting on the hours, and they add up

Rebuilds may not be economical for drilling rig engines, and Tier IV engines are going to cost a lot more
Oct 12, 2017 8:43 AM By: Brian Zinchuk 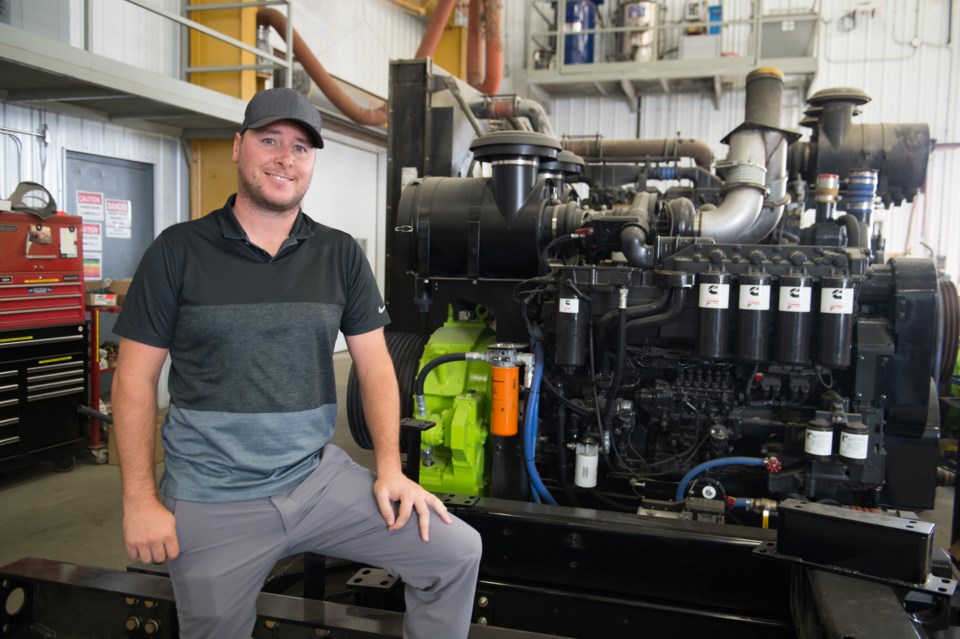 Dustin Rouse of Rouse Industries has been putting a lot of work into the recapitalization issue facing the drilling industry.Brian Zinchuk

Weyburn– Rouse Industries has supplied engine packages and clutches of their own manufacture for many of the drilling rigs in southeast Saskatchewan over the years, as well as other areas of the country. But when the downturn hit over three years ago, nearly all drilling companies stopped buying new rigs, and Estevan-based rig manufacturer Do-All Industries was an early victim. Its bankruptcy affected many vendors in the region, and Rouse was no exception.

While drilling activity over the last three years has been down roughly half to three quarters compared to the boom years, equipment is still being used and engines are gaining hours. They all have a finite lifespan before rebuilding or replacement is required. But with drilling contractors struggling with day rates at a fraction of what they got when these rigs were built, there will eventually be a day of reckoning.

Dustin Rouse, general manager of Rouse Industries of Weyburn, has done extensive work over the last year, looking into what is going to need to be done to make sure the drilling fleet’s engines keep turning.

Rouse Industries is the sister company to Southern Industrial & Truck.

Rouse said, “In the drilling market, what we’re seeing is we have engines, transmission systems and components that have been in service for varying time frames, from the 2010-2014 arena, the last time anything was purchased or upgraded, in Saskatchewan specifically. There’s a lot of equipment that’s been run out there that’s put together with tape and bubblegum, trying to keep getting the hours out of it without going into full-on overhauls or replacements.”

The life expectancy of engines is more based on the amount of fuel that goes through it than the number of hours, he explained. Brands are now looking at intermittent duty cycles, which means there are restricted ratings for the platform. “Most engine companies will have life cycles based on gallons of fuel consumed,” he explained.

Using two examples, a 1,350 horsepower system like what is now common on mud pumps, and a 1,000 horsepower system, and their ratings, he determined the life expectancy runs from 40,000 hours to as low as 20,000 hours depending on load factor. It varies engine by engine.

“In Saskatchewan, in reasonable years, you can expect 300 drilling days. I think that’s a conservative number. When you start looking at what the load factors have been and then take the hours of utilization per day and convert that into days and years, what we are seeing is a projected life to overhaul of roughly around five-to-six years.” Rouse said.

In a normal year, “Three hundred days might be a little disappointing. Today, 200 might be more realistic,” he said.

“I spent most of the early part of 2017, January, February, March, going around to a bunch of rigs doing load profiling. I was hooking up to engines on location. I was trying to find what their load percentage was over their life, the duty cycle over their life, idle time they were seeing, to see not only where we’re at with the life cycle of this product, but also what to expect for life cycles going into Tier IV engines.”

He focused mostly on pumping, as the size of pumps has gone up considerably in recent years, whereas drawworks engines for hoisting have gone up marginally, for 650 to 800 horsepower. Generator sets went from 350 to 450 kilowatts per gen set.

Rouse said, “In pumping, we went from having 600 horsepower engines, and now the newest engines we’re selling are 1,500 horsepower. Anyone that’s buying today are 1,350 to 1,500. The orders I’m delivering over the next several months are all 1,500 and greater.

“It’s a lot more pumping. But if you look at what’s changed in drilling over the last 10 years, the number of days it takes to drill the same well today, as opposed to say 2008, is half.

“So when you think about what’s changed, you have to drill the same distance of hole, but in half the time. Anybody who has ever drilled anything knows you have to get all those cuttings back up to surface. If you’re drilling faster, you’re pumping more, because you have to get those cuttings up to surface quicker. If you’re trying to drill faster, more accurately, you need more torque down at that bit. That’s what’s changed, most dramatically, from the engine point of view,” he said.

He noted that the pressures are so high now, drilling is almost waterjetting the rock.

Most of the once-commonplace 800 horsepower mud pump setups have been replaced. Whereas before, it was possible to run a pump with a smaller engine, oil companies are now demanding the engines match the pumps, as Rouse said, “They will be taken to the limit.”

And thereupon lies the issue of how long will these engines will last.

When you wear out a 15 litre engine in a semi, you can swap out that engine core for a factory-reconditioned engine and get back to work in relatively short order. Not so, with drilling rig engines, because they’re considered "high horsepower" they fall into a different category of product and their volumes are so low.

“The problem with our engines in high-horsepower, industrial applications, especially with these intermittent duty cycle ratings that are restricted, they don’t use the recon system. There aren’t enough volumes for it and it’s not a standard engine in the way other markets of the world get treated. You have to deal master rebuild centres in most cases. So you’re not getting the same level of pricing a highway guy would get, traded in.”

His calculations set an engine rebuild costing as much as 70 per cent of the new engine price, but he added he’s seen them go as high as 110 per cent of new. That the begs the question if one should even consider rebuilding, or just going with a new engine?

“So when you’re talking recapitalization of some of this equipment, I think a lot of guys assume you’re going to be able to go out and repair this stuff for cheaper than what you had to buy it for originally, and I actually don’t know if that’s going to be the case, between the change in the dollar (exchange rate) and the fact the recon program doesn’t really work in these high-horsepower applications. It’s more like going to be one-to-one, if not higher,” Rouse said.

Some drillers have engines in the shop now, and they’re not being repaired as a result of this. Instead, they’re cannibalizing their fleet, pulling engines off idle rigs instead. “I have several engines in the shop that are not going to be repaired, because the cost is too high. The engine manufacturers don’t have the programs in place to offer, like the on-highway stuff, so they’re still expensive. And to replace with new, it’s hard to do.”

And there’s the kicker, because new engines, as of the new year, are going to be a lot more expensive. Drilling rig engines, which had been Tier II emissions controls, now will have to meet the much more stringent, and expensive, Tier IV level come the new year.

Rouse said one should budget a new Tier IV engine costing 1.6x the cost of an equivalent Tier II engine, and he’s seen it even higher. Tier III didn’t really exist in high horsepower applications due to exemptions that were allowed. Those exemptions end at the end of the year.

Engines can be grandfathered with equivalent tier engine, but Rouse wonders if it will be cost-effective. It’s also an open question of what the federal government will do with regards to emissions controls

Asked what the price of a full package of engines for a Saskatchewan drilling rig, Rouse said a couple years ago the total would have been roughly $1.12 million, based on their average manufacturer’s prices.

“The new price today is hard to judge, because there’s not a lot of purchases going on,” he noted.

“One of the things, when you talk about recapitalization that is so concerning is you go add up all these numbers, and then you take a theoretical traditional loan out … Between the low day rates we are seeing and the high cost of operating, its hard to see how that investment is going to pay you back.

Even with a currently unrealistic total drilling days of 300 days per year, and an average current day rate, subtract wages and look at what’s left, he said, “You wonder how on earth this is going to get recapitalized?”

He’s been working for months to find a product they can offer to address these recapitalization issues for drilling customers, but hasn’t announced anything yet.

Is AC the future?

With some expectation within industry that Tier IV engines might have teething problems, Rouse said there’s an expectation everyone will go to alternating current (AC) powered drilling rigs. Instead of having separate engines mechanically linked to the various pumps, drawworks and hydraulically-powered topdrive, an AC rig uses a much larger generator plant, transmits power via wires, and they, in turn, power electric motors throughout the rig.

He noted that fully electric has its place, and on the big rigs that operate in different regions they can make a lot of sense, but for the Saskatchewan market specifically, it's very hard to see that happening. Rouse said there’s a rude awakening when it comes to efficiency expectations, and the electrical power generation is not without its difficulties. This includes much, much larger engines, i.e. 50 litre engines over 30 litre engines in pumping applications. There’s also the addition of variable frequency drives for loads requiring variable speed, which have “real losses” in energy efficiency. The additional components also makes rig moves more difficult, and therefore, more costly.