Seeding season has begun, and the Health Foundation’s Farming for Health project is no exception.
May 15, 2015 9:38 AM By: Devin Wilger 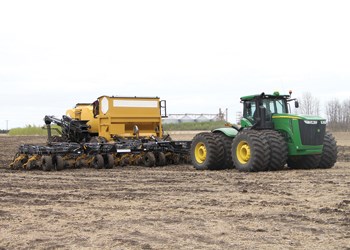 SeedMaster donated the use of its latest equipment to the Health Foundation’s Farming for Health Project. The masked off areas on the seeder are the parts which are not yet ready to be revealed to the public.

Seeding season has begun, and the Health Foundation’s Farming for Health project is no exception. SeedMaster has donated the use of its newest equipment in order to help seed the plot, equipment so new that it has not been fully revealed, with the official launch happening at the Farm Progress Show in Regina.

The Farming for Health project is raising money for a new regional hospital. Ross Fisher, Executive Director of the Health Foundation, says that for the three years of the project it has benefitted from the support of the local agriculture industry.

“This is tremendous for us because it allows us to extend the life of the project. It’s a very difficult thing to seed this much land on an entirely volunteer basis. This allows us to continue the project, which we’re grateful for.”

Cory Beaujot, SeedMaster Mark­eting Director, says that they are happy to get on board with the project, because manufacturing seeders gives the company deep roots in rural communities, which will benefit from a new regional health centre.

The new seeder is a 60 foot machine with twelve inch row spacing and 340 bushels of seed tank capacity. Behind is a new 630 bushel tow-behind nova metering tank. It has overlap control to prevent over-seeding and over-fertilizing. This year’s crop will be entirely canola over the 600 acres, and Beaujot says that they are also very proud of their canola metering technology, and says it will help farmers make more money on a profitable crop, including those farmers working for a charity project.

The entire machine is new to the market, and some areas of the machine were masked off as part of a new look for the company, Beaujot says, which they are not ready to reveal.

The seeding will also be assisted by Maple Farm Equipment, who supplied the tractor used, and overall the farming operations are handled by local implement dealers and local farmers. Fisher says that the local industry getting on board is the reason why the Far­ming for Health program works, whether it’s input costs, equipment or volunteer hours, all are needed to make the project work. Fisher notes that they are fortunate that most of the input costs are donated, meaning most of the profits can go to the regional hospital fund, a significant amount of money.