The Manitoba branch of the Nature Conservancy of Canada has launched a fundraising campaign to restore native prairie grasslands on a newly acquired addition to its Fort Ellice property.
Aug 24, 2020 2:49 PM By: Michèle Letourneau - Local Journalism Initiative Reporter (Brandon Sun) 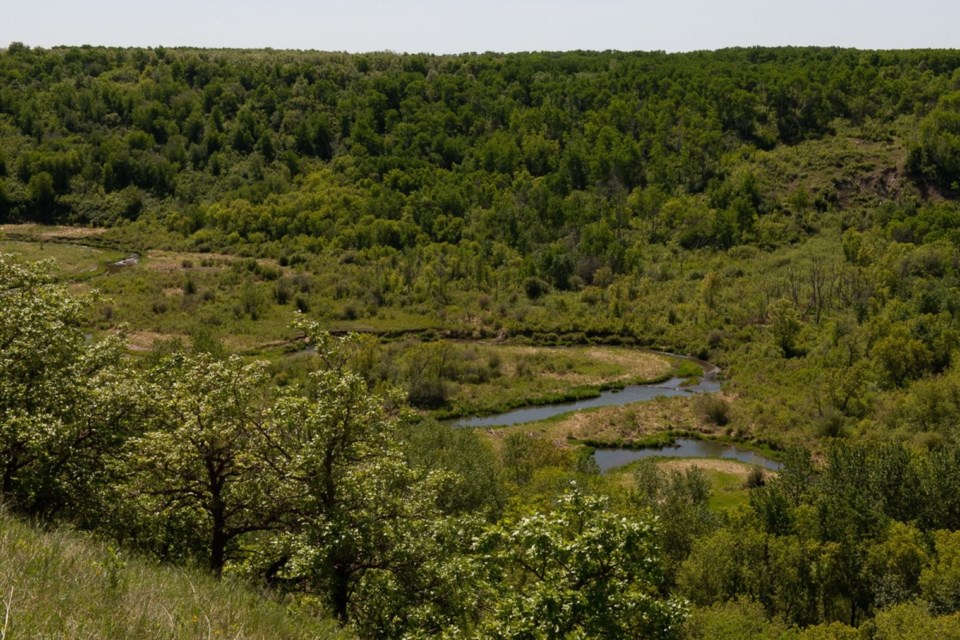 The Nature Conservancy of Canada in Manitoba has launched a fundraising campaign to help pay for the expansion of protected prairie grasslands on Beaver Creek, east of the Manitoba-Saskatchewan border near the Assiniboine and Qu’Appelle rivers, to add to its existing Fort Ellice propertySubmitted Photo

The Manitoba branch of the Nature Conservancy of Canada has launched a fundraising campaign to restore native prairie grasslands on a newly acquired addition to its Fort Ellice property.

The property, called Fort Ellice 3, is roughly an hour and a half northwest of Brandon, near St. Lazare.

Kevin Teneycke, the conservancy’s regional vice-president in the province, likens the new 644 acres to the hole in a doughnut. The private, non-profit organization already owned the land around it, except Crown land to the south, which is managed by the Association of Manitoba Community Pastures.

"All the land together creates a large block of unfragmented native habitats," Teneycke said.

The Nature Conservancy of Canada partners with individuals, corporations, foundations, Indigenous communities and other non-profit organizations and governments at all levels to protect natural areas. It secures properties through donation, purchase, conservation agreement and the relinquishment of other legal interests in land and manage them for the long term, according to its website.

Teneycke said the conservancy has already purchased the land and the fundraising goal of $350,000 is to pay that debt down, as well as finance the restoration and ongoing management of the property.

The habitat restoration work will include reseeding land, recently used for farming, with grassland species.

Nevertheless, the conservancy will reseed 50 to 60 or more species.

"It’s not an easy thing to do it. It does carry some expense, but it is trying to put it back," Teneycke said.

Because the land was converted to farmland not so long ago, there’s hope there may be grassland seeds in the soil that, given the opportunity, will start to come back. All told, that process could take three to five years, after which the area will be managed with prescribed grazing by cattle.

The conservancy said in a news release that more than 90 per cent of Manitoba’s prairie grasslands have already been lost, and that grasslands are one of the most endangered ecosystems in the world.

"It is estimated that we continue to lose an additional 147,000 acres every year," it stated.

"Large mammal species like, elk, moose and Canadian lynx, roam the property. Threatened birds, such as Sprague’s pipit and Chestnut-collared longspur depend upon the unique grassland habitat for survival."

Teneycke said it takes thousands of years for such an ecosystem to evolve.

The conservancy has partnerships with Waywayseecappo First Nation, Park West School Division and Birtle Collegiate. The partners have used the Fort Ellice property for some of their educational programming. Waywayseecappo has used it for after-school education programming.

"With Park West, we’ve done everything from wildlife track identification and winter survival. We have a number of trail cameras that are out there and the students collect the video cards and take the information back to the classrooms. They and identify what species have been found on it. It was part of a wildlife technician course that the Park West School Division had offered," Teneycke said.

The organization is not only helping to relieve threats and stresses on nature, but it also offers humans the opportunity to experience nature.

"There certainly is documentation saying there are lots of health benefits to providing places and opportunities for people to go out and experience nature,´ Teneycke said.

There are hiking trails available to the public, but those who might want to avail themselves of the natural setting are asked to contact the regional office and get permission, as cattle do roam.