Nettie Auramenko celebrated her 100th birthday accompanied by family and friends on October 22 when a five-generation photograph was taken during a party at the Sturgis Read Club.
Nov 18, 2016 2:03 AM By: William Koreluik 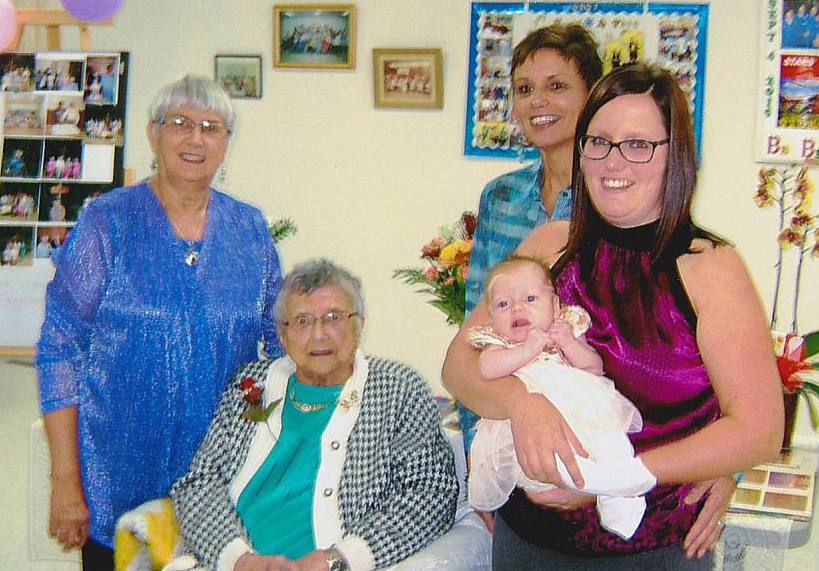 Nettie Auramenko celebrated her 100th birthday accompanied by family and friends in Sturgis when a five-generation photograph was taken. In the photo, from left, were: daughter Bernice Petras of Boissevain, Man.; Auramenko; granddaughter Deb Auramenko of Brandon, Man.; great-granddaughter Nicole Murray of Virden, Man., and great-great-granddaughter Ava Murray.

Nettie Auramenko celebrated her 100th birthday accompanied by family and friends on October 22 when a five-generation photograph was taken during a party at the Sturgis Read Club.

Also attending were family members Don and Helen Auramenko of Calgary, Alta.; Lil Auramenko of Regina; Leonard and Carol Serdashney of Regina; Alex and Annie Pudlo of Winnipeg, Man.; Renee Auramenko of Saskatoon; Art Auramenko of Sturgis; John and Judy Pugh of Porcupine; Jocie and Harold Gogol of Canora and Noreen Auramenko of Fort Qu'Appelle. Many special friends attending included Stanley Jankauskas of Tisdale; John and Eileen Meroniuk of Sturgis; Val and Wayne Mastrachuk of Preeceville; Irvin Petras and Steve Drebit of Sturgis, and Lorraine and Claude Slogotski of Yorkton.

"We were all entertained by Mike and Company with great music, which Nettie thoroughly enjoyed,” said Petras. “After much reminiscing and visiting, the cake was cut and a lovely lunch was served.”

The family thanks all who came to help celebrate the birthday, she said. “The beautiful flowers, gifts and cards were very much appreciated, as well as the phone calls she received.”

Nettie married Paul Auramenko in 1937 in Sturgis United Church. They lived on a farm 14 miles northeast of Sturgis in the Woodlight District.

“They farmed for 37 years with all the hardships including no electricity and no roads to speak of, only broken trails," Bernice said. "Mom worked very hard with lots of cows to milk as well keeping the chickens, turkeys and pigs fed.

“Mom always had a huge garden which meant storing produce in a dirt cellar and a lot of canning for the winter,” she said. “We picked wild strawberries, saskatoons and cranberries. We also had a hive of bees for our honey. Later we discovered Mom was allergic to bee stings and when stung had required medical attention.”

In 1974 the farm was sold to the Saskatchewan Land Bank and the couple moved into Yorkton. Nettie retired from the farm but went to work at the Blackstone Hotel, then to the Pizza Place, where she and a friend had competed to determine who could make the most pizzas. She then went to work at the Park and Prairie Care Home helping with the residents. While living in the city, she still maintained a huge vegetable garden and also grew flowers and numerous apple trees.

Auramenko loved to be busy entertaining family and friends with homemade bread, cabbage rolls, perogies and such, she said, adding that her speciality was angel food cakes.  After her husband's passing in 1999 she moved into Fair View Arms Condominiums where she spent nine years, enjoying time with her neighbours.