There are a variety of metaphors one could use to describe the process that brings a play off of the page it's printed on...and fashions it into real moments in time. For example, there is the jigsaw puzzle metaphor.
Nov 30, 2016 5:20 PM By: Connie Schwalm 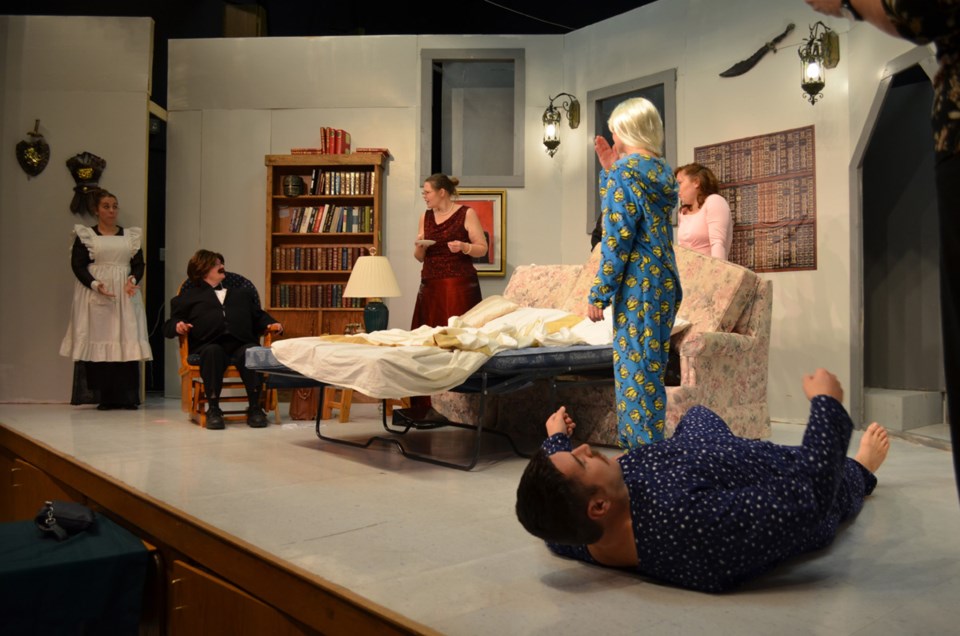 There are a variety of metaphors one could use to describe the process that brings a play off of the page it's printed on...and fashions it into real moments in time.

For example, there is the jigsaw puzzle metaphor. One could describe it as a process of putting each piece in place until the picture is complete. However, that metaphor would suggest that there is only one 'correct' finished product one can have when the process is complete.

That is certainly not true of a live theater production.

There is a plan of course. All things created begin with a vision. When the work being created is a quilt...the 'vision' is a particular design. When the work is a live theater performance...one turns to a script. Pat Jackson who has directed the Kipling Community Theater for several years, notes that considerable thought goes into choosing a play.

A basic structure is also necessary. A backing needs to be chosen when one makes a quilt. Similarly, when one is 'making' a live stage production...one needs a set.

Brian Manns has also been working to build sets for the Kipling Community Theater production for several years. Building a set requires attention to basic physical necessities. However, a good set...like a proper backing for a quilt...will also work to enhance the pattern it supports.

“I sit in during the early practices,” says Brian. “I find out where it is that they need a door or a window. Then, I start to build the set. I work to make sure that everything is where the actors need it to be. But, I also try to make sure that everything on stage looks like it belongs. Some sets are pretty challenging. Last year's set required a number of 'hidden doors' and sliding panels. This year, the set is more 'basic'. I usually have help from someone, like Dan. And this year I have Larry Jackson helping. So, that makes it easier.”

As the set is being constructed; the people who will breathe life into the play begin to assemble the various pieces/characters. The members of the cast are the quilt-makers. They know what design has been chosen. They've memorized their words. They know what place their character has in the design. Each one brings their character to the stage. And...just as scrapes of cloth are joined together to create a quilt...the different characters are...bit by bit...brought together to create a stage performance.

Yet, although each individual plays a predetermined character, reciting memorized lines, the resulting performance will ALWAYS be a one-of-a-kind creation. Because, as with quilts (and here is where the 'quilt metaphor' proves its worth), even though several different quilts might all follow the same pattern, no two will ever be exactly alike. Each quilt is set apart by the way different material has been stitched into the design.

In the same way, each performance of a certain play is made unique by the individuals that have poured themselves into their character.

“I started doing this after I moved here. I've always enjoyed theater. And I like getting 'out of my comfort zone' for a while. My character this year is an 'entitled lady'. I really don't like her. But, she's a fun character to play, because when I'm 'her'...I get to say and do things that I'd NEVER say or do in real life.”

Max Krecsy has been walking onto Kipling's stage for more years than he can remember.

“I think that I've been in plays for about 10 years. It's something fun to do. I really enjoy making people laugh. It does take up a lot of your time. Since September, I've been going to bed thinking about my lines...waking up thinking about my lines... But, this year, for example, I am the mousy preacher 'Nigel'. I really like him. So, it's fun being able to put him on stage.”

Teena Manns says that, like Max, she estimates that she's been appearing in the Kipling plays for about 10 years. For Teena, taking part in these productions is a chance to make some time and space for herself.

“I came to the first play when I moved to Kipling. I laughed SO hard! I knew right away that I wanted to get involved. It's challenging sometimes...having to balance work, family and this. It's a good thing that I'm able to 'multitask'! I play kind of a 'double role' here too...because I'm also here as a member of the Lion's Club. But hey...THIS year I get to play an elderly gentleman. He's great! Doing this is my relaxation...this is 'me time'.”

Danny Sauve has been in productions both in Kipling and his hometown of Montmartre. He has been amazed at the gracious similarity between the two theater companies.

“I was in about 5 plays in Montmartre. Within the first year or so after I came to Kipling, I was in a play here. It was a great way for me to find my place in the community. I feel SO comfortable with the people I'm working with. And I'm comfortable on stage these days too. When I was in High School, I was about the furthest thing from a 'drama guy' that you could think of. But when I started doing these plays, I discovered a side of myself that I didn't know was there.”

This is the second time that both Melissa Bowley and Susanne C. Welechenko have been on-stage in Kipling. For Suzanne, this is a chance to do something that she's wanted to do for quite some time.

“I'm finally at a place in my life where I am able to do something like this. My three girls were in so many things...music...drama...I learned a lot from watching them. Last year, I was asked to take on a role. I had the time that I could commit to it. So I tried it...and I loved it!”

Melissa says (while shooting her friend Billie a grin) that she was “talked into this”, though it is clear that Melissa is happy that she allowed herself to be persuaded.

“I was told I'd have a 'small part' last year. Yeah...right! I walked on stage at the start and basically left it only a couple of times before the end!! But, it's all good. It HAS to be good when you work with people like this. No-one takes themselves too seriously. And, the whole group has your back. If you mess up, the people around you will jump in and make sure that the play keeps going. It'd be hard NOT to enjoy something like this!”

For three cast members, this year marked their Kipling debut.

Karlee Weisgerber has done some work on other stages (once playing an Avon Lady who had been kidnapped). For her, this was a way to introduce herself to more people in her new community.

“I wanted to get involved and meet new people. I'm really excited about all of these new friends I've made! I enjoy my character too, although I don't think I'd care for her if I ever met her. It's still a lot of fun to bring her to life. And, this is a nice way to get a break from being 'Mommy' for a while. It's nice to have some things in my life that are just for me.”

All of this is brand new for Juanita Armstrong.

“I've never done anything like this before. I was going to do it last year, but it didn't work out. So, I made a point of doing it this year...and I'm glad I did. It hasn't always been what I expected. I thought that stage drama was more improvisation. I've learned that it SURE isn't! But, this is a great group of people. It's been wonderful working with them”.

Although Dan Manns has been involved with these productions before, this is the first time that he's moved onto the stage himself.

“I was prompter last year, and I had fun with that. So, I decided to try taking on a part this year. It's been really interesting watching my character evolve. The character I first read isn't the character I'm playing now. It's been fun making that process happen.”

Audrey Tennant has taken over as prompter this year. It is a first-time experience for her too.

“I've always wanted to get involved in this. This was finally my year to do it. I think I'd like to try getting up on stage at some point. But, for this year, I'm happy helping out this year. I get to have all of the fun...and none of the pressure!”

As she's watched this creation take shape, Pat has been delighted by the way these individuals have made the play THEIRS.

“At a certain point, I was almost not needed. The group took hold of the thing so thoroughly! And they were so enthusiastic. Even the ones that were apprehensive fed off of the group's energy when they needed to. Then...when the audience began to laugh...the cast started playing to THEM. That was wonderful to see.”

One can take a metaphor too far.

That said, there is one more way that this metaphor fits the Kipling Community Theater's latest production. This year, the proceeds from the Dinner Theater will be divided between the Lions Club and KidCare. The Lions will once again donate their share back to the community, while KidCare will use their portion to help furnish their new building.

So...like a lovingly fashioned quilt...this unique creation will provide warmth and delight to many who were never part of it's creation.