Federation of Sovereign Indigenous Nations Chief Bobby Cameron has welcomed the recent appointment of Mary Simon as Canada’s Governor General, but adds it should have been done a long time ago.
Jul 19, 2021 1:54 PM By: Jon Perez,Glacier Media 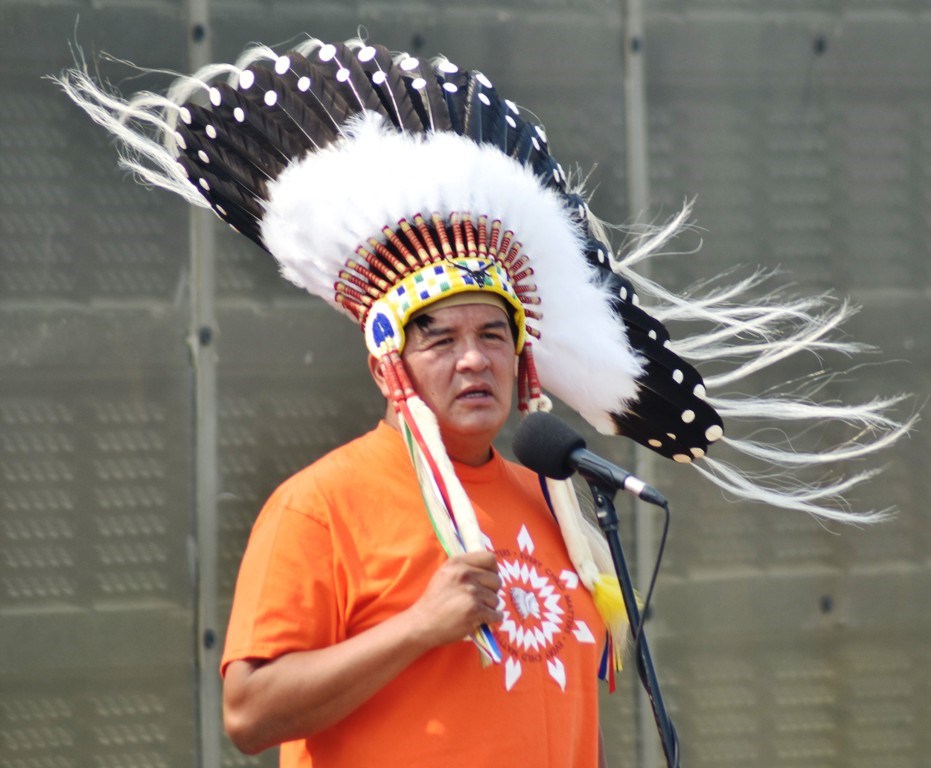 Federation of Sovereign Indigenous Nations Chief Bobby Cameron speaks during the unveiling of a flag to honour all Indigenous children that suffered abuses while attending residential schools last Saturday at Marquis Downs.Jon Perez

Federation of Sovereign Indigenous Nations Chief Bobby Cameron has welcomed the recent appointment of Mary Simon as Canada’s Governor General, but adds it should have been done a long time ago. Prime Minister Justin Trudeau, early this month, appointed Simon as the first Indigenous person to be the 30th Governor General since Confederation, replacing Julie Payette.

The Indigenous Peoples of Canada welcomed Simon’s appointment calling Trudeau’s move one step towards healing and reconciliation for the atrocities and other repressive policies the country’s First Peoples have experienced.

“We want to acknowledge Prime Minister Trudeau on the appointment. We were satisfied and grateful that he did that,” Cameron said after Saturday’s unveiling of a flag honouring Indigenous children who lost their lives in residential schools.

“I would advise Prime Minister Trudeau and the Governor General, go back to the original intent of the [position’s] role and the importance, the priority of inherent and treaty rights holders and that’s our First Nation People.”

Cameron added that the role of the Governor General, when the British Crown came in and signed a treaty with the First Nations in the 1800s, was a spokesperson in terms of the treaty relationship between the monarchy and the Indigenous Peoples.

“That’s where that role has originated from. Now, 2021, it has expanded to different duties.”

Simon’s appointment is being considered an important step in healing and reconciliation. Her appointment is at a crucial time after several grave sites were discovered at former residential schools, an incident that again opened a lot of wounds and brought back haunting memories for survivors and their families.

Trudeau in a statement, after Her Majesty Queen Elizabeth II approved Simon’s appointment, said the former two-term president of Inuit Circumpolar Conference (Inuit Circumpolar Council) has dedicated her public service career in advancing the social, economic, and human rights issues of Inuit and Indigenous Peoples of the country.

“I am confident that she will serve Canadians and promote our shared values with dedication and integrity. Through this appointment, we are ensuring that Canada is represented by someone who exemplifies the very best of our country,” Trudeau said of Simon, who is also a former president of the Inuit Tapiriit Kanatami.

Simon is the 13th Governor General appointed by Her Majesty Queen Elizabeth II and will represent The Crown in Canada. She had advocated for Inuit rights and culture, and the rights of all Indigenous Peoples.

Simon hails from northeastern Quebec in the Ungava Bay area where she was part of the delegation that negotiated the James Bay and Northern Quebec Agreement.