Beloved chainsaw sculpture artist Darren Jones has been back in the Energy City bringing more art into the community.
Sep 30, 2020 12:10 AM By: Anastasiia Bykhovskaia 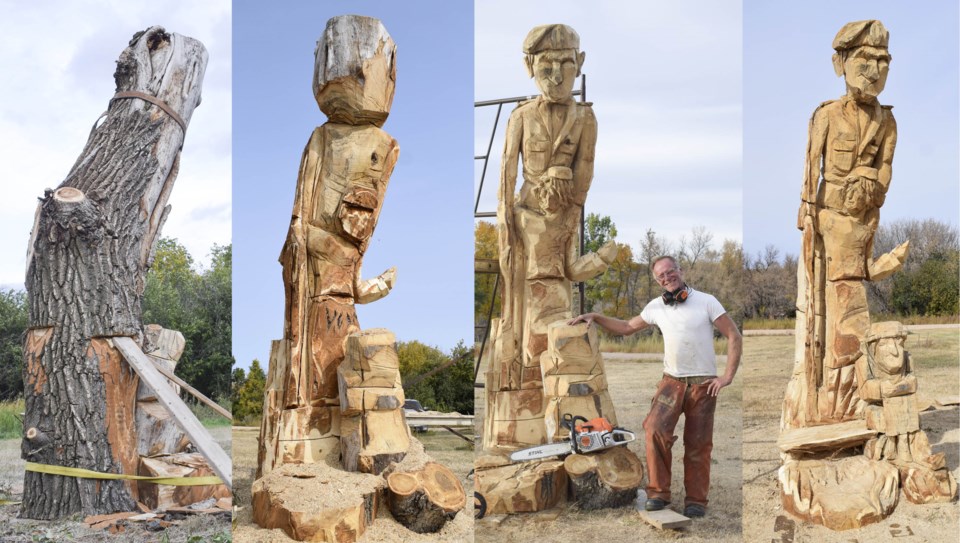 Darren Jones is carving a new monument out of a 108-year-old black poplar tree found in the Estevan area. Photos by Anastasiia Bykhovskaia

Beloved chainsaw sculpture artist Darren Jones has been back in the Energy City bringing more art into the community.

Some of his local historical art pieces, such as the Soldiers' Tree and Forever in the Clouds monuments, are well known not only in the province but also attracted attention from all across the country. Other creations such as tributes to Estevan's industries and sports along with other private projects Jones completed became locals' favourite sites.

This time he came to fulfill another valuable project, that is meant to bring light to the contemporary soldiers coming back from missions and living among us, often carrying emptiness and trauma inside.

Lester Hinzman, a man behind the ideas for the Soldiers’ Tree, Forever in the Clouds and now this piece, said that to him this monument is about love.

He went on to explain that the soldiers today fight for others and the Canadian values in peacekeeping missions, and they need help returning to normal life after they come back. But often they can't ask for it, struggling with it in the silence of their own lives. So Hinzman wanted to do something to tell their story, as he saw what it takes for a man to come back from war first hand.

"This man fought for his country and his belief system," said Hinzman explaining his idea of the project.

Hinzman came up with an idea to attract more attention to contemporary soldiers and the trauma they deal with a while ago. Then the wheels started turning and things started coming together like a puzzle. Jones came to Estevan to work on this and a few other projects about a month ago, and going by Hinzman's idea and passion, he developed the idea and created a unique monument that tells a story of love, trauma and ignorance at the same time.

Through his art, Jones wanted to show the real feeling behind Hinzman's idea. He wanted to make something bigger than just a memorial.

"But I also wanted to bring to attention to that the fellow sitting in the very front on the bench that you can sit with. He is the one that's already returned and that's been forgotten," Jones explained.

Thus, the new monument consists of two parts. There is a soldier with a prostatic leg that is planned to be made out of steel hugging the Afghan child with a book in his hands, which represents the service and feats of Canadian soldiers. In front of them, there is a smaller monument of another contemporary soldier, who came back from a mission and ended up on the street, alone and forgotten, with a little help board in his hands. The bench next to the monument will allow people to sit next to the forgotten soldier and look closer at him, reminding them that it's everybody's part to remember and help the soldiers who've been protecting others paying a very high price.

Jones added that he'll make the top part look like a real-life scene, and the bottom will be an actual monument, bringing the big idea down to earth and raising awareness about a serious problem that exists in the society.

"We need to support them and they don't get the support. There is a lot of them that have problems dealing with the horror of it all, and the nightmares that they get. Sometimes they can't tell the nightmare from reality. And they drink or (use drugs), which doesn't help. It's the way to escape it for a while, but they need help," said Hinzman.

Jones used a picture of an Estevan man, who served in Canadian troops and was a part of one of the Canadian peacekeeping missions, as a prototype for the contemporary military working uniform.

The idea of the monument was inspired by a quatrain poem Hinzman wrote, which will be a part of the carved statue.

"The scars run deep, not all you see,

But like a root it's still a part of the tree.

The pain is there, it's part of life

It's our duty to help with the strife," Hinzman's poem reads.

Hinzman explained that the monument represents what contemporary soldiers do and also different levels of trauma soldiers deal with.

"You can see the loss of a leg, but you can't see the pain that's in his heart and his soul. And like the root, it's still part of that tree, and you don't see it, but it's an intercut part of that tree … And the pain is there every day. And it's our job to help with that," Hinzman said.

Jones added that the forgotten soldier monument at the base of the composition represents that inner trauma.

"There is going to be an underlying theme between the tree and the soldiers, and the memorial," Jones said.

Even though Jones had some pictures that he is using as an idea, he is trying to keep both soldiers' faces pretty generic as they represent many returning soldiers and their stories.

"I want it to really touch some people's hearts. And maybe that's going to inspire someone to stand up and do something for them," Jones said.

For the monument, Jones used a dry, 108-year-old black poplar that was leaning over the road in the Estevan area. When the carving work is done, Jones will stain and colour the wood, making a transition between the real-life and the monument parts of the composition.

At the time of the interview, it wasn't decided where the monument will be located after it's completed. Follow the Mercury for more updates on the progress on the monument and its future.

And while Jones spent about a month in Estevan so far, the work on the soldier monument has been going pretty slow. Jones said that first, the emotion and passion behind the monument has to be captured and performed properly.

"I'm not rushing this one, but it's coming out beautifully," Jones said.

But the popular in this area artist also had several other projects to accomplish. Jones brought the refurbished benches back to Estevan Soldiers' Tree site and together with some community members placed themn where they belong by the courthouse. He also worked on private projects in Hitchcock, Manor and Estevan.

"Since I got here I've done well over a hundred feet (30 metres) of curved sculpture. I worked every single day. I've carved a tattoo. I've carved a memorial bench for a lady in Manor for her husband that passed. It's actually a tribute to their farm from trees that were on the farm," Jones said.

Another person asked him for a totem pole, and he made a statue with wildlife, a lot of which was inspired by local animals he saw while driving around the area. There is also a bench at the bottom, making it functional. Jones also carved an eagle and a crocodile for other community members.

Once Jones is done with projects in the area, he will head back to Alberta, but he said he is going to be back again as he has really warm feelings for Estevan and the people here.