For Last Birds, a folk duo featuring popular local musicians Lindsay Arnold and Mike Davis, days of quarantine and self-isolation turned out to be very fruitful.
May 25, 2020 7:22 PM By: Anastasiia Bykhovskaia 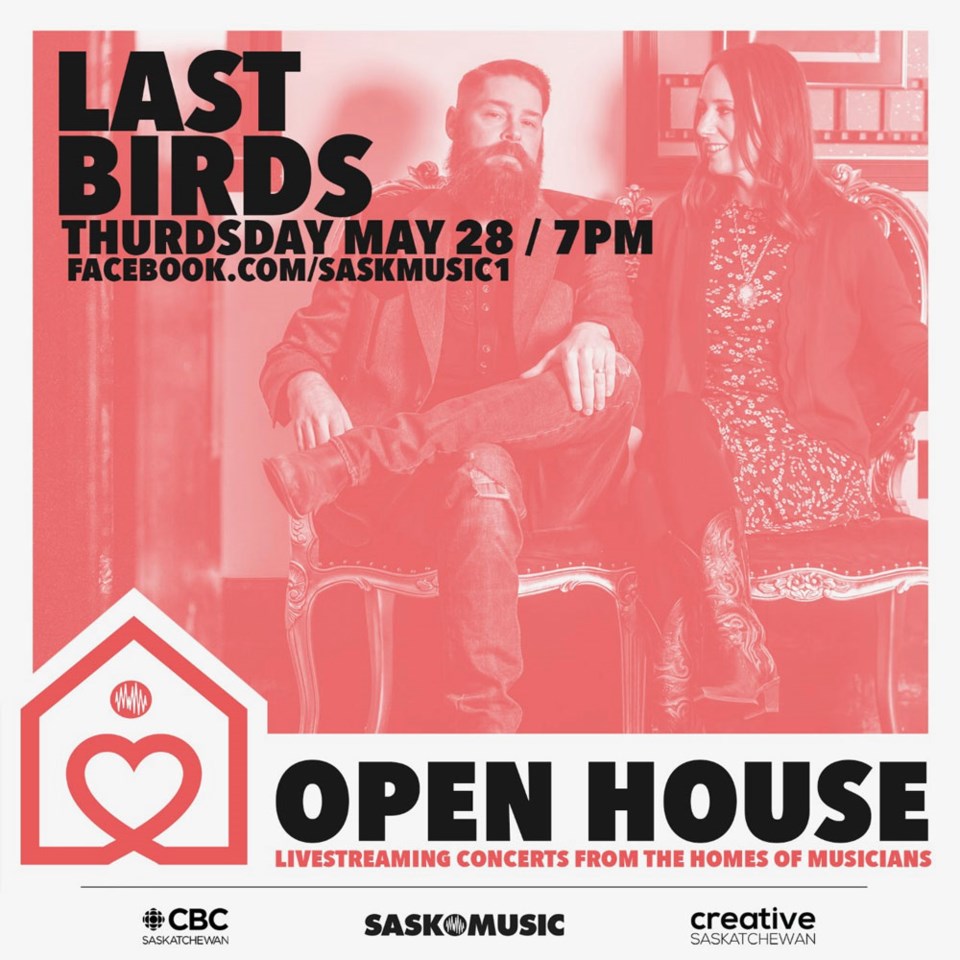 Lindsay Arnold and Mike Davis with their folk project Last Birds will livestream a performance on May 28. Image submitted

For Last Birds, a folk duo featuring popular local musicians Lindsay Arnold and Mike Davis, days of quarantine and self-isolation turned out to be very fruitful.

Throughout the spring months, Arnold and Davis were working on their new EP, which is still on hold due to the pandemic, and were hoping for a chance to try out some of their creations.

Fortunately, the opportunity was not long in coming and this past week Last Birds was happy to announce that they were selected for SaskMusic's Open House Series. Arnold and Davis will turn their living room into a stage on May 28 at 7 p.m. for a 30-45 minute performance that will be streamed on the SaskMusic’s Facebook page.

“We are excited to try out this new frontier. It will be the first time livestreaming a performance, so it will a bit of a learning experience for us,” said Arnold in an interview with the Mercury.

Not only it will be their first time performing online, but also most of the songs they plan to introduce have never been played in front of the public before.

“A lot of these songs are going to be released on the album that we are putting out,” said Davis.

On the day of the concert, Davis and Arnold will set everything up in their house. The North Portal Community Centre landed them some equipment for sound and their cellphone will serve as their camera and streaming device.

“In some ways, it’s great because there is a simplicity to it … Usually if you are a musician and you go to an event and you are going to play, you have a sound person that handles all that technical stuff for you. So now we have to be both, performers and the technician,” said Arnold.

“But it’s going to be good, because it is so simple,” added Davis.

The performance is planned to go as a real concert. Arnold’s mother, who does all her stage outfits, sewed a new dress for the occasion. Davis said that it is really exciting to finally have a reason to dress up.

The only big difference is there will be no real people in front of the musicians.

“It will be like a real performance. We are going to be playing at a venue … It will be a combination of songs and stories about those songs … We usually incorporate a little bit of humour into what we talk about between the songs,” said Arnold.

“Lindsay is really good at describing the songs and telling the stories about how the songs came to be and what they mean,” added Davis.

Even though they plan for it like a concert, livestreaming format is different from traditional settings.

“You really have to adapt how you perform, because it’s not like having an audience in front of you. It’s different, it’s just the camera. You have to really remember that there are other people out there watching. Just a different approach,” said Arnold.

The EP has seven songs. On top of that there are some compositions that are brand new, so the concert will give fans a unique opportunity to hear them.

“We’ve written one song just since the pandemic hit. It was inspired by the current situation, so that will be new that won’t even be on the EP,” said Arnold.

When the pandemic began, SaskMusic put out a call for local talents. Musicians had to submit their material to a panel and the jury invited some of them to do livestream performances. Saskatchewan musician JJ Voss, along with Ellen Froese, Aaron Karpinka and many others, had a chance to play online through the Open House Series during the last couple of months.

Saskatchewan-based artists have been performing live concerts from their homes every Tuesday, Thursday and Sunday in April and May at 7 p.m. The series is supported by SaskMusic, Creative Saskatchewan and CBC Saskatchewan.

Even if people can’t watch the performance live, they can find the record later. But Arnold noted that for musicians it's always much more exciting to have people present and show their appreciation at the concert.

“We are hoping to have as many viewers as we can get. It makes it more fun when there are more people listening and more entertaining,” said Davis.

“On Facebook there is no applause button, but if people hit those likes it feels like applause, you can see them go across the screen as you are performing. So we’ll be really counting on people to hit those likes, loves, share buttons,” said Arnolds.

The duo was really grateful for the opportunity given to them and other Saskatchewan musicians.

“Anybody out there who is into music, get a hold of SaskMusic, they’ll do wonders for you. They are amazing,” said Davis.

The musicians also said they really treasure the support from the local communities throughout the years.