Henders Drugs in Estevan has been recognized for the care it provides to its patients. The long-time local pharmacy was presented with the Patients’ Choice Award by the Pharmacy Association of Saskatchewan (PAS).
Jun 18, 2021 3:30 PM By: SaskToday 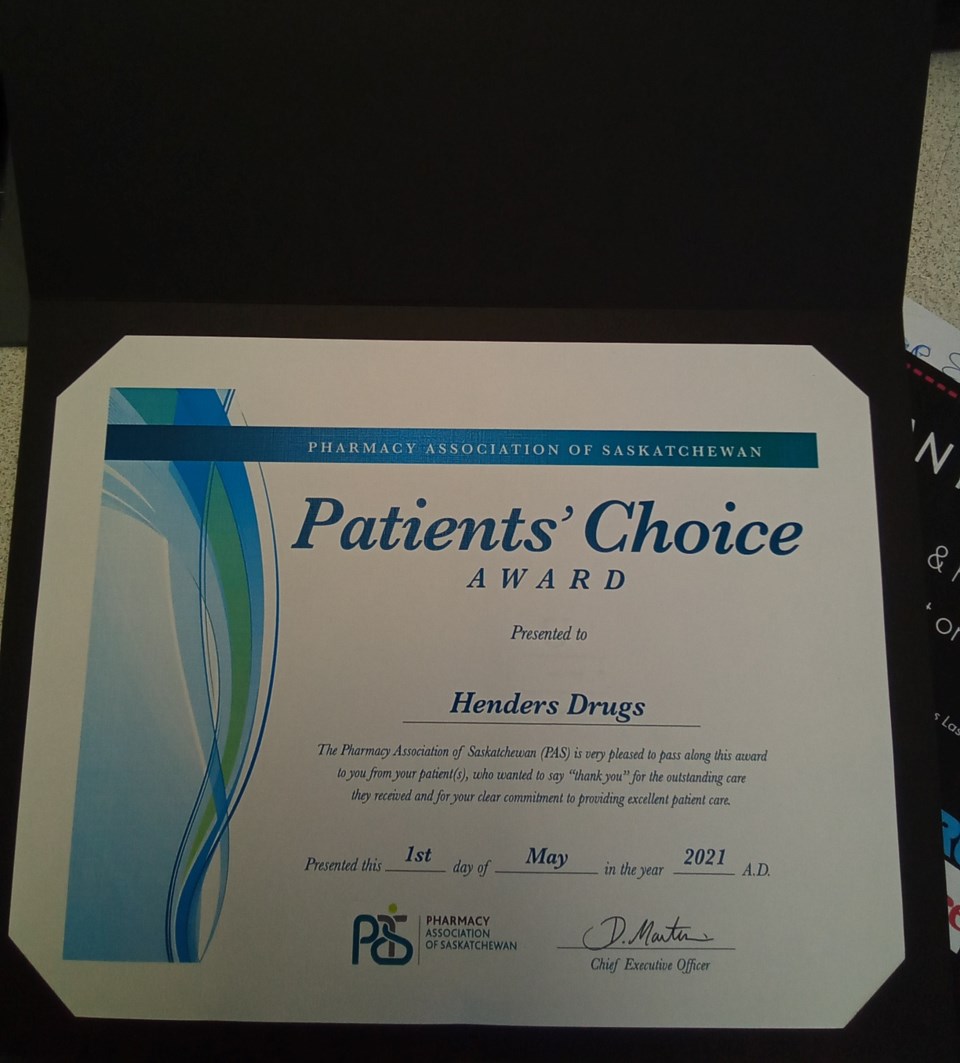 Henders Drugs in Estevan has been recognized for the care it provides to its patients.

The long-time local pharmacy was presented with the Patients’ Choice Award by the Pharmacy Association of Saskatchewan (PAS). In a Facebook post Wednesday when they announced they were being honoured, the pharmacy said the recognition was for providing outstanding care to patients.

Dawn Marie Sloan-Beahm, who is a pharmacist at Henders, said the PAS has an award each year in which patients can nominate their pharmacy.

“Quite often, it’s not really something that the public is particularly aware of, because the promotion for it tends to be through Facebook or pharmacy channels,” said Sloan-Beahm.

But this year the PAS did more promotional work, so there were nominations than ever before.

“Our pharmacy was nominated by one of our customers, and so we were sent out certificates,” said Sloan-Beahm.

Henders Drugs was told the name of their nominator, and what they said. Sloan-Beahm said the client was pleased with good customer service and friendly staff.

“It’s as simple and as important as that,” said Sloan-Beahm.

It’s nice to receive positive feedback from customers, and to let the people at Henders to know that they’re doing something right to make the patients happy, Sloan-Beahm said. The award is a validation of the work that the staff members at Henders have done.

“It’s very gratifying to know that the efforts that we put in over the last year were being noticed,” said Sloan-Beahm.

Typically a pharmacy would have to go out of its way for their customers to know that this initiative is going on. At that point, it almost feels like they’re asking for somebody to nominate them.

“We’re a modest bunch as a general rule. We don’t like to tap people on the shoulder and say ‘Hey, would you mind doing this for us?’” said Sloan-Beahm with a laugh. “So, it’s not typically done. It was really nice that it was more publicly promoted by the pharmacy association so that none of the pharmacies felt the need to have to do that. It makes it feel extra important when we get a nomination.”

Henders was one of several pharmacies to receive the award this year.

The business has five pharmacists, a technician, a front store manager and about a half dozen front store staff.