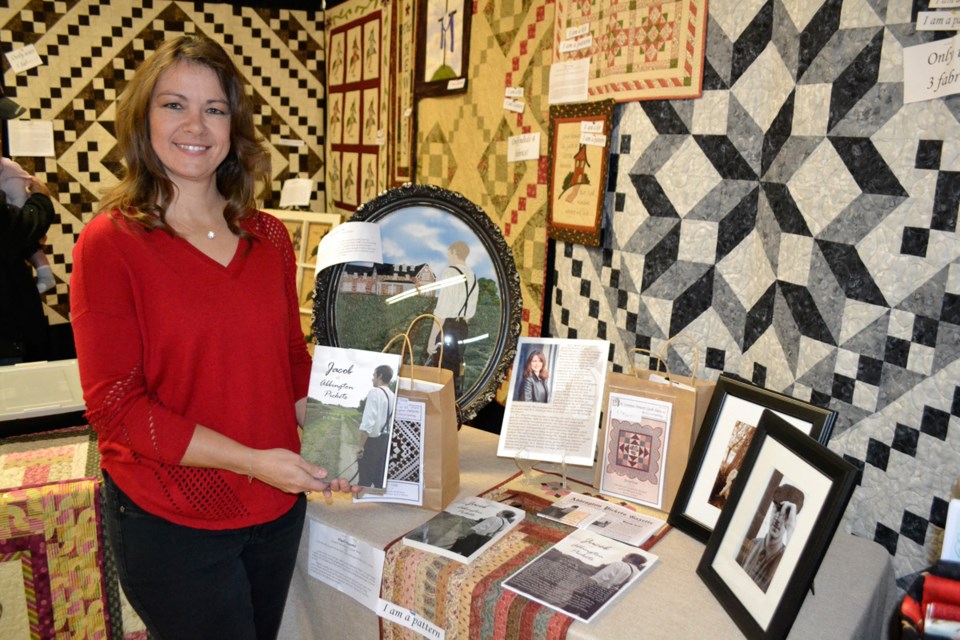 Historical fiction author Corinne (H.C.) Hewitt's second novel in her “Abbington” series -  'Jacob's Place' - will be released in November and although Hewitt is now in her forties, she says writing and history have been a part of her life since childhood.

“Since I was 12, I've wanted to write a book,” says Hewitt, who grew up on a farm near Manor. “My grandmother (Carol Thomas) worked at Cannington Manor in the 1970s through to the 1990s, so I spent a lot of time there.”

“I love history,” she says. “And with my first book, I tried to write a fact-based book about  Cannington Manor. But I realized I really needed to create my own character, so that's when Jacob was born.”

Hewitt penned her first novel in the Abbington series in 2015. 'Jacob of Abbington Pickets' is the story of Jacob Hudson, whose story takes place in a Victorian village in Canada, much like Cannington Manor.

“It's a fictional series,” says Hewitt. “But Abbington Pickets is inspired by Cannington Manor and the Beckton Ranch inspired Goldenrod Ranch in the books. And Rosemount - the Ed McCullogh place - provided the inspiration for Crocus Flats, where Jacob grew up.”

“My mom's grandparents Bert and Alice Hibbert came from England and worked at Beckton Ranch. So my books are fiction, but there are some true-life tidbits tucked in the stories, too.”

In the latest Abbington book, Jacob is about to marry the love of his life (and best friend), Abigail Rodgers. In 1911, King George V was ruler of the British Empire, Sir Robert Laird Borden was Canada's Prime Minister and Jacob Hudson's life was seemingly going well, even though rural life in early 20th-century Saskatchewan wasn't easy.

Jacob and Abigail's happiness is challenged by a series of obstacles - an abrupt illness, extreme weather and unexpected debt - resulting in a test of Jacob's faith.

“It's really a story about honesty, integrity and hard work - which aren't so easy to find anymore,” says Hewitt. “I created a strong character and a character who is respectful of women. In the first book Jacob's story starts when he's eight-years-old and ends when he's 20. And in the new book, he's 21.”

“I found it easy to write from a man's perspective,” she adds. “And this book is suitable for everybody from age 12 and up. One grade 10 student - a girl - did a book report on 'Jacob of Abbington Pickets' for school and I think it's certainly one way to get a picture of the history during that era, especially in rural Saskatchewan.”

Hewitt says the process of writing the books was fuelled by her passion for reading, writing and local history.

“For years, I was a stay-at-home mom,” says the author, who now lives on an acreage near Hanna, Alberta, where she owns a quilt shop - H. Corrine Hewitt Quilt Patterns & Fabrics. “But I always pursued creative things like sewing, crocheting, music and of course, quilting and designing quilt patterns.”

“When I first moved here to Hanna, I was a seamstress and then I moved into quilts and designing patterns. I've done 44 patterns so far and eventually, I opened a quilt shop in 2009. In six weeks, my husband, Kenny and our kids and I painted and worked on the store.”

“And as much as I love the quilt shop, I always thought about writing a book before I ever thought of opening a store. But I just thought it would never happen.”

“However, every year at the quilt shop, I take time off between Christmas and New Years. It really rejuventates me,” says Hewitt. “And finally, in 2015, I said, 'This is the year I write a book.'”

“I had already written a few chapters a couple of years before, but this time, I set myself a goal to complete it between January and April. I finished it and I even took the photos the publisher used on the cover art.”

“My editor said it's 'clean fiction,'” explains Hewitt. “And it's a Christian story, but it's not a book reserved exclusively for Christian readers.”

“I love writing and I love the subject, so in that sense, it wasn't hard to write,” she says. “I wrote most of it after supper - between supper and bedtime. We have a nice, comfy chair - I call it Grandad's Chair - and I sat there with my laptop and wrote anywhere from 20 minutes to two hours every weeknight.”

“And I gave my husband free rein of the TV,” laughs Hewitt.

“But seriously, my husband, Kenny, my daughters and my sons and my entire family supported me big-time and I'd really like to thank them for all of their support.”

Hewitt aims to continue writing the Abbington series and says that in addition to quilts, apron and other patterns which tie-in with the series, she is working on a book of recipes inspired by the story.

“It's been a wonderful so far and I will continue to tell the story of Abbington,” says Hewitt. “If I could talk to my 12-year-old self, I'd say: 'Wow, you did it. And you didn't think you could do it, but you did.”

Hewitt's books are available in both print ($20) and electronic formats. Print editions can be purchased at Kal-Tire in Carlyle. For more information, contact: hchewittauthor@gmail.com.