The town of Carlyle became a little brighter Tuesday with the refurbishment of the rainbow-coloured crosswalk located on Souris Avenue outside of Carlyle Elementary School.
Jun 18, 2021 7:00 AM By: Emily Klatt 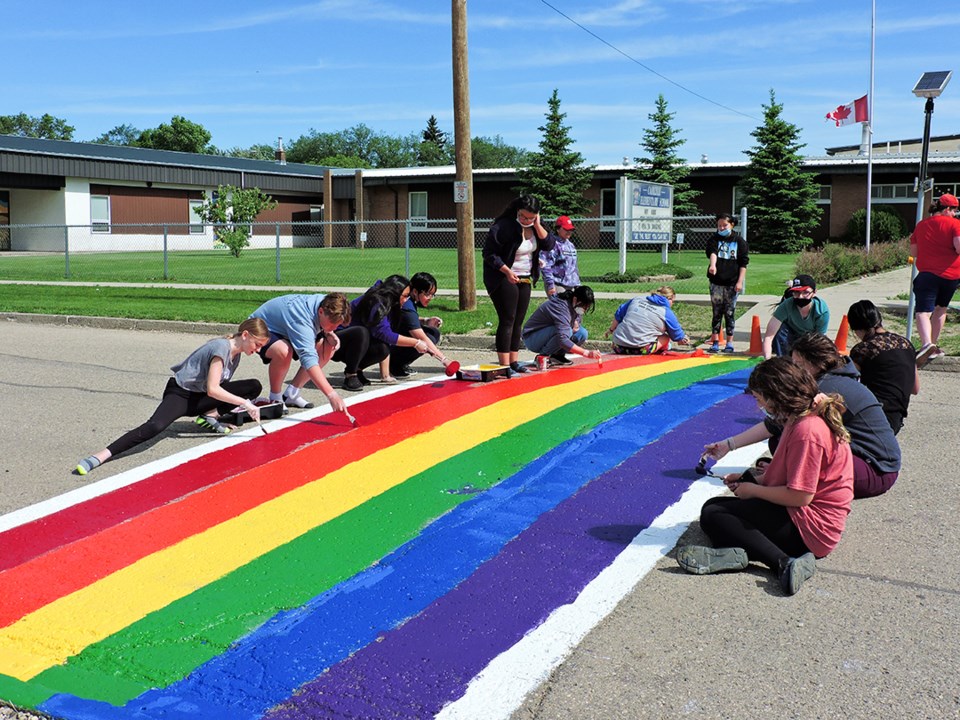 The town of Carlyle became a little brighter Tuesday with the refurbishment of the rainbow-coloured crosswalk located on Souris Avenue outside of Carlyle Elementary School.

LGBTQ2+ stands for Lesbian, Gay, Bisexual, Transgender, Queer, and Two-Spirit, with the plus used to indicate the inclusion of other sexual and gender minorities. June is celebrated as LGBTQ2+ Pride month in communities around the world.

The crosswalk, first installed in 2019, is the initiative of Carlyle resident Jade Moore. The idea for the crosswalk came after Moore noticed similar projects being done in other rural communities.

“I know just from having friends that are in the LGBTQ+ community that they sadly typically end up leaving rural communities and going to the city because they are more accepted there, it seems like … so I thought that there is a need for one in Carlyle,” Moore said.

This year, Moore was assisted by a class of Grade 7 and 8 students from Gordon F. Kells High School.

According to GFK teacher Morgan Wasylyk, the students were more than happy to lend a hand in repainting the rainbow crosswalk.

“When Jade had asked us if we wanted to help out in this, I said, 'Well, I'm assuming yes, but I'm going to check with the kids and see where their heads are at’,” said Wasylyk. “So we just did like ... a secret vote. I just had them cover their eyes and I asked how many of you would like to participate in painting this crosswalk and 23 out of 23 hands went up.”

For Moore, the ultimate goal of the rainbow crosswalk is to help create a safer and more accepting community for all those who live there.

“I think Carlyle is like a really loving community ... and I want everyone to feel welcome here, including LGBTQ+ community.”