A new initiative will pay tribute to those from the Estevan area who served their country.
Apr 5, 2021 8:36 PM By: SaskToday 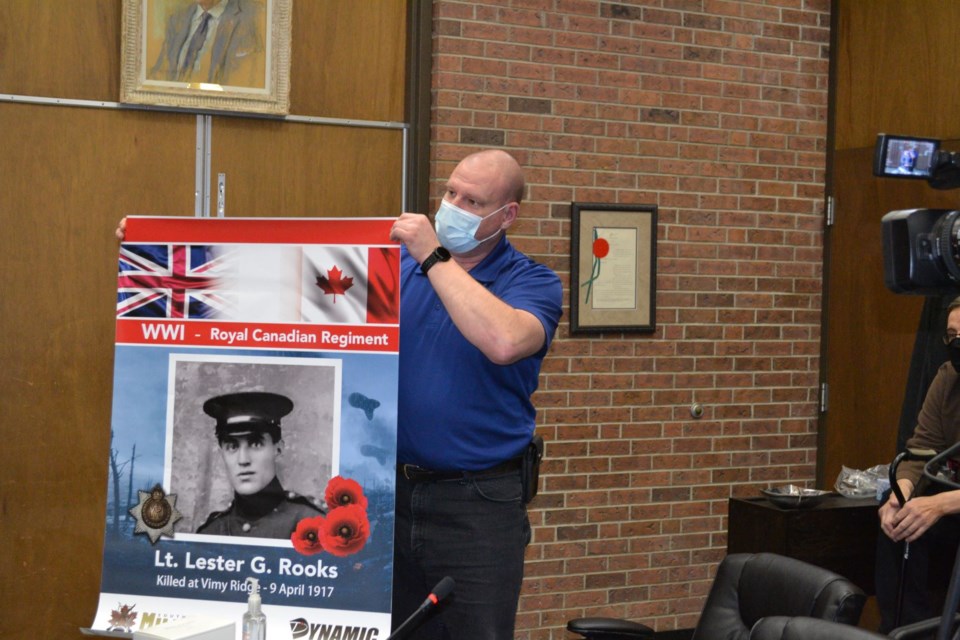 A new initiative will pay tribute to those from the Estevan area who served their country.

Craig Bird, a local military historian who is the president and founder of the Southeast Military Museums, explained his vision to members of Estevan city council on Monday night.

Bird would like to see banners hang from light standards on arterial roads in the city. The banners will have images of Canadian Forces members from the Estevan area who perished during service to Canada, and also photos of those who served, survived and came back to the Estevan area.

“There’s a lot of them in which people who walked down the street wouldn’t know who they were, or even that they served,” said Bird. “Part of the foundation of our museum is to remember all those, not only the ones that we lost, but also the ones that had served, contributed to this city and this great community and became founding citizens of this community.”

Bird proceeded to unfurl a banner, measuring 30 inches by 36 inches, paying tribute to Lt. Lester Rooks, who died in the Battle of Vimy Ridge in 1917.

The banners would be double-sided, and would have different themes. The banner honouring Rooks is for the First World War.

“Who knows what he would have contributed to the community had he survived the war, but his family is still here and still prominent in the community.”

Bird also asked for $3,000 in sponsorship for the purchase of the initial 10 mounting brackets/hardware for the banners. The cost of the mounting kits would be around $300 each. Bird noted the mounts are top quality and warrantied for 10 years.

Council approved the sponsorship money, but wanted to wait to make a decision on the location, as the Shop Estevan committee has already approached city council about having banners this year.

But council members did say that the banners are a great idea.

The museum’s banners would be taken down after Remembrance Day.

The Southeast Military Museum has artifacts at the Royal Canadian Legion’s Estevan branch and at an area northeast of the Estevan Regional Airport.

This week’s edition of the Mercury will have more on this story.