Graduates from the Gordon F. Kells High School in Carlyle greeted the town with smiles on Saturday evening, as they paraded through the community.
Jun 18, 2021 6:55 AM By: Kaitlyn Meisner 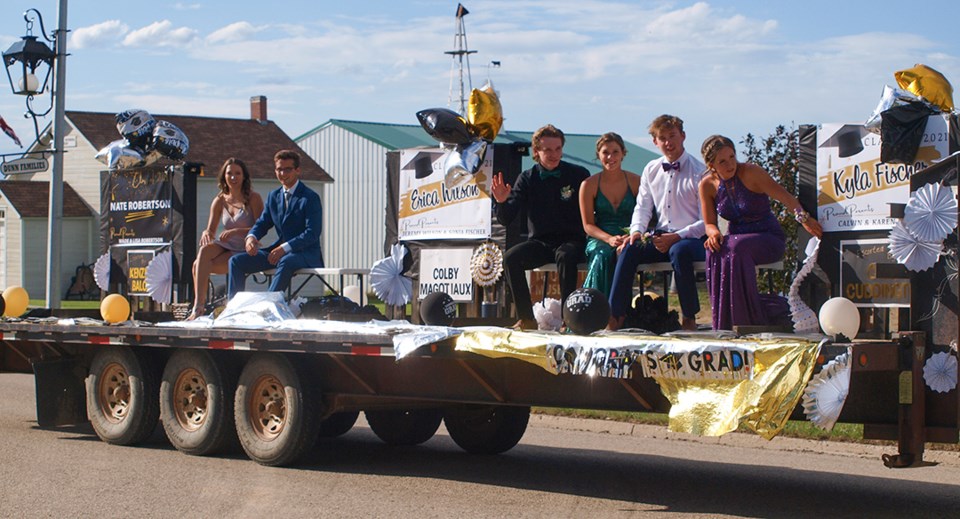 Graduates from the Gordon F. Kells High School in Carlyle greeted the town with smiles on Saturday evening, as they paraded through the community.

The parade was part of the celebratory events which took place in honor of the 37 students graduating from Grade 12 this year.

Graduation was a little different due to COVID-19 regulations. Nevertheless, different people throughout the community pulled together to make sure that the graduates of Gordon F. Kells still got the celebration they deserved.

Usually, the ceremony and its program are planned mostly by the school. However, the planning and organizing of the ceremony and parade were taken over by the parents of the graduates, as they felt the school had enough to deal with this year.

There were several challenges in the planning of the ceremony, as people were not able to meet in person to plan, with about 60 parents on the committee. Therefore, most of the planning took place through technology.

Nevertheless, the goal with planning the celebration despite the challenges was to give a proper send-off to the hard-working students. Tammie Riddell, one of the parents on the committee, explained that the ceremony and parade only came about because the parents felt it was important that the students were celebrated in the best way possible.

“So, basically, the reason why it was all started was because we felt that the kids deserved to be celebrated and…their accomplishment of their graduation [deserved to be celebrated] … Because unfortunately last year ... they [the 2020 graduates] didn’t get a celebration … And so, we were trying to make sure that we could do something for these kids.”

The graduation consisted of a private outdoor ceremony at 3 p.m., with a parade afterwards at 5:30 p.m. The outdoor ceremony took place at the RM of Moose Mountain building, close to Eighth Street West. The location was chosen partly for its seclusion since the ceremony was not open to the public due to COVID-19 restrictions. Each graduate was allowed three guests.

The parade took a route which covered most of the town, and the word was spread about when and where the parade would take place.

In addition, even before the graduation, the community of Carlyle found ways to celebrate their graduates in the midst of the difficulties presented by restrictions. For instance, several businesses in town showed their support by putting up colourful decorations for the graduates in their windows. There were also banners displayed over Main Street, each with a graduate’s picture on it.

Overall, the community demonstrated their strong support for the graduates, while the people who planned the celebration came up with an unconventional celebration to give them the graduation they deserved.