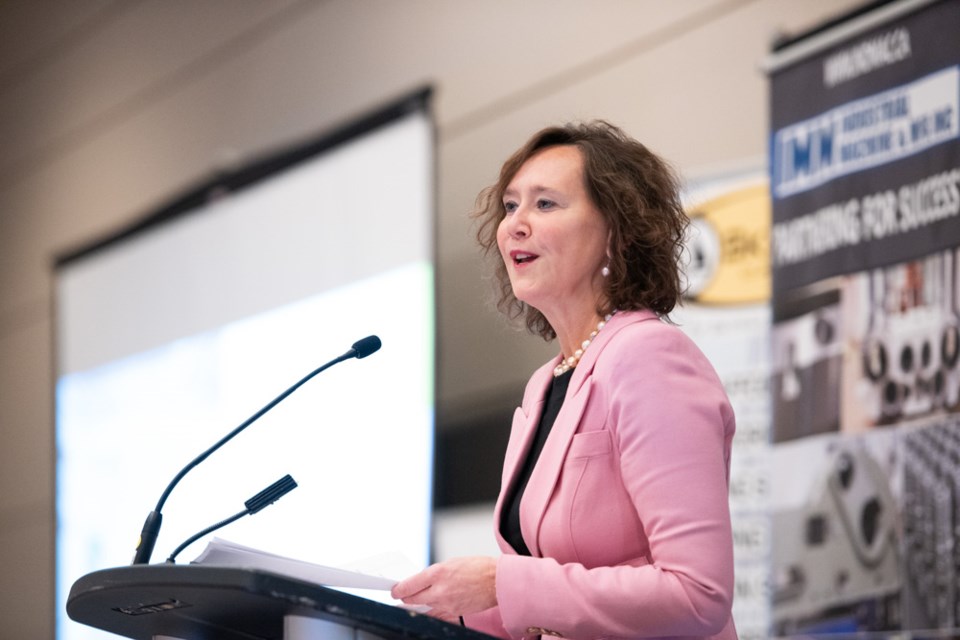 Regina – On Nov. 14, Premier Scott Moe released “Saskatchewan’s Growth Plan,” which sets out 30 specific targets for growth by 2030. One of those listed was growing oil production to 600,000 barrels per day.

On Nov. 15, Pipeline News asked Energy and Resources Minister Bronwyn Eyre by email about that target, and what it means for Saskatchewan. Here are her responses:

Pipeline News: The Saskatchewan Party’s plan for 2030 included a very specific number—600,000 barrels per day (bpd) of oil production by 2030. We are currently producing approximately 468,000 barrels per day, so this would be a 28.2 per cent increase. How did you come up with that number?

Bronwyn Eyre: The development of the Growth Plan involved extensive stakeholder consultations. We spent several months during the spring and summer of 2019 speaking with constituents and industry stakeholders, as well as in-depth analysis and research. We feel this barrels per day goal is a realistic one.

The government also took into consideration the wide range of new technologies and expanded production practices, from polymer flood to SAGD (steam assisted gravity drainage), which we think can be deployed over the next ten years to substantially increase Saskatchewan production.

P.N.: Is that just a nice, aspirational number, or do you have specific targets for certain areas—say northwest Saskatchewan via SAGD development, or the Torquay and Bakken development in the southeast?

Eyre: It’s definitely an aggressive growth target, but one we think is attainable, if we take a thoughtful approach to sector development across the province’s many different plays and types of oil production.

For example, thermal/SAGD development in the Lloydminster area has really attractive upsides. We’ve seen a large number of these types of projects in recent years, and many new projects are in the planning and construction phases, so we look forward to seeing them come to fruition over the next decade.

There is also a major opportunity in the rest of the province, and in the Weyburn/Estevan area in particular, to do a lot more waterflooding, which will create more annual production. Enhanced oil recovery projects, specifically CO2 flooding, are also a key focus area in the Growth Plan.

The Growth Plan also highlights some new incentives to boost investment in the sector, such as the Oil and Gas Processing Investment Incentive (OGPII) and the Saskatchewan Petroleum Innovation Incentive (SPII). The Growth Plan also includes objectives for Saskatchewan when it comes to new and expanded export pipelines and other strategic natural resource development and infrastructure projects.

Let’s not forget that we have some of North America’s most competitive plays, which will continue to bring in development capital. These plays have continued to receive strong rankings in various industry competitiveness publications, such as the prestigious ScotiaBank Playbook, and the Fraser Institute’s Canada-US Energy Sector Competitiveness Survey, which show we are on investors’ radar across the continent as a leading investment capital destination.

Eyre: Let’s not forget that five or six years ago, Canada was approving pipelines, while the United States (under President Barack Obama) was holding them back. Here we are, in 2019, and the roles have largely reversed. In Canada, Bills C-69 and 48 pose existential threats to the Canadian energy industry, while in the US, federal red tape is being slashed and major projects are being approved. We have to do everything we can, provincially, despite being a landlocked province, to advance projects and generate investment.

Global demand for oil is widely forecast to continue to increase year-over-year to 2040, and we expect Saskatchewan producers to deliver some of the most sustainably-produced oil in the world to meet that growing global demand.

P.N.: What about pipeline capacity? Do we do it by rail? There is enough crude-by-rail loading capacity in west central and northwest Saskatchewan to handle those additional volumes. Is that the answer? Or would some of that (from northwest Saskatchewan) end up in the Keystone XL, if it ever gets built?

Eyre: Takeaway capacity constraints are the single greatest barrier to growth in the entire Western Canadian Sedimentary Basin. This must be addressed, as we continue to hold the federal government accountable to deliver on TMX and remove harmful policies such as Bill C-69 and Bill C-48.

The goal of the Government of Saskatchewan is to upgrade and refine as much of our crude oil production as possible. We all know that pipelines are the best way to move oil, but transportation by rail will also, always, be part of the mix in Western Canada—particularly as long as agricultural, mining, forestry, and manufacturing sectors are also obliged to rely on the rails and don’t have alternative options to export their products via pipelines.

P.N.: In a broader context, what would an increase of 28 per cent in oil production mean to the Saskatchewan economy? How many jobs? Additional businesses? Drilling activity?

Eyre: An increase in oil production from the Growth Plan baseline of 480,000 bpd to 600,000 bpd per day in 2030 will, we hope, have significant positive impacts on the provincial economy, as well as drilling activity, jobs (both direct and indirect), and new revenues to RMs and the provincial government.

P.N.: What would it mean to communities such as Lloydminster, Kindersley, Shaunavon, Weyburn, Estevan, Carnduff and Carlyle?

Eyre: Obviously, the communities in our four major oil and gas producing regions benefit from wealth generation flowing from the oil and gas sector, in terms of direct and indirect jobs—over 34,000 full-time equivalent jobs in our province. However, there are over 100 RMs in the province, with oil and gas production, which also benefit from revenues from the sector for local priorities. The oil and gas sector generates well over a $1 billion annually directly in provincial government revenues that support quality of life services across our province, from highways to hospitals, social services to schools.

P.N.: Many oilfield services companies dramatically reduced their staffing when the downturn hit. A common number we heard from most oilfield services was they cut their staff by about half, from 2014 to 2017. Do you think we would be able to bring the people back, needed to accommodate such growth? Is that a bad problem to have?

Eyre: I understand the sector was spooked by the last downturn, and people need to feel confident again.

A healthy and growing sector will drive all kinds of direct and indirect employment opportunities for the people of our province, as well as serve as a magnet for people and companies from other jurisdictions wanting to benefit from opportunities in Saskatchewan.

P.N.: Is there anything you would like to add?

Eyre: As a province, we have to be creative. We don’t want to curtail, and haven’t, as Alberta did. We want to go in the opposite direction. As long as federal anti-energy policies are in place, we have to look at infrastructure and leave no stone unturned when it comes to increasing production and transportation, through royalty, incentive and infrastructure strategies. I plan to reach out to my counterpart in Manitoba in the next few days to talk about potential CCS/EOR corridor partnerships and an update on projects that involve the port of Churchilll. Yes, there are federal headwinds, but we must continue to do everything we can to embrace positive Western Canadian energy.