The South Saskatchewan Regiment (SSR) colours were re-dedicated Saturday afternoon at the Estevan branch of the Royal Canadian Legion.
Aug 19, 2020 12:19 AM By: Anastasiia Bykhovskaia 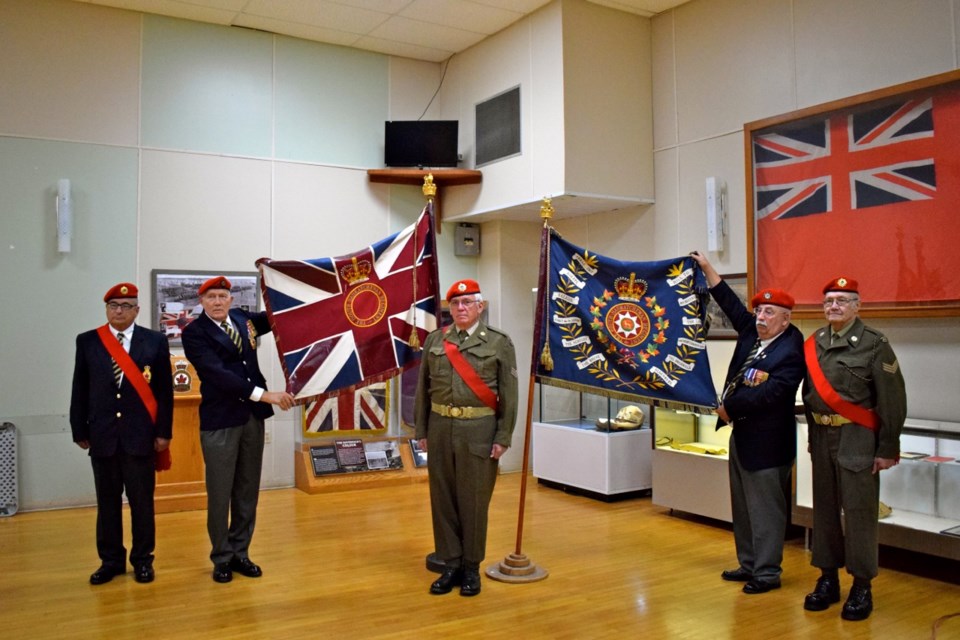 The South Saskatchewan Regiment (SSR) colours were re-dedicated Saturday afternoon at the Estevan branch of the Royal Canadian Legion.

On that day the Southeast Military Museum became a new home for the colours and Craig Bird, the founder of the museum, made a presentation about the history and voyage of the flags.

“The regimental colours usually consist of two separate flags. One being the suzerain's, or king or queen’s flag, and the unit flag,” explained Bird.

The SSR was formed in 1905. The regiment’s colours were the Union Jack with the South Saskatchewan round in the centre of it, and the unit colour having a South Saskatchewan crest on the blue background with battles that SSR fought in with the 152nd battalion that was its predecessor during the First World War.

“Each regiment’s ability to keep its formation was potentially critical to its and therefore its army’s success. In the chaos of battle not least due to the amount of dust, smoke and battlefield soldiers they needed to be able to determine where the regiment was and to be able to keep track of the commanders," said Bird, explaining the role of the colours.

In contemporary battles, when people aren’t riding horses anymore, colours were eliminated and are no longer carried during the battles. But they continue to be used during formal events and to represent the history of that regiment.

During the Second World War, on Aug. 19, 1942, the SSR took part in the Dieppe Raid operation. Soldiers from the regiment pushed over the beach at Dieppe, France, in the dim light of the early morning and entered the small village of Pourville, believing that surprise had been achieved.

To their dismay, however, the Germans had detected the raid and the SSR was met with heavy gunfire by the enemy. By the end of the Dieppe Raid, the SSR lost 84 men. And by war’s end, the regiment had suffered 475 casualties.

“That’s some of the highest casualty rate in the Canadian army during World War Two,” said Bird.

Regimental flags were generally awarded by the head of state during a special ceremony. Estevan residents who attended the re-dedication ceremony on Saturday had a chance to watch a rare footing of the historical moment when the colours were given to the regiment by King George V in the midst of First World War, on July 16, 1943. It was a top-secret ceremony since the location had to be kept secret because of the king’s and high-ranking Canadian official’s presence.

“They called it Operation Flag at the time to keep it under the radars,” said Bird.

The overseas battalion was disbanded on Dec. 15, 1945, and the soldiers were transferred back to Canada. The unit in Estevan kept existing until Sept. 1, 1968, when it was stood down and reduced to zero strength.

“The unit wasn’t disbanded, but it was reduced so that, god forbid, if there is ever a war, we can still raise the South Saskatchewan Regiment,” explained Bird.

He noted that regimental colours, even when they are replaced or not used anymore, are usually kept at religious buildings, museums or other places of significance to that regiment, but aren’t destroyed.

On March 24, 1970, the SSR colours were retired and put up at the ECS. For about 50 years the flags were there to teach students about the military history of the region. Dave Rooks participated in the original dedication ceremony at the ECS. He said he still remembers that day when a lot of students gathered up for the ceremony.

With the establishment of the Southeast Military Museum and some changes at ECS, it was decided to move the colours over to the legion, where they will take their rightful place among other important historical artifacts. Dave Rooks said that he felt great about the colours being moved to the legion, where they will be available to the public for viewing.

During the presentation, Bird also showed a unique video in which Dutch people marched and sang a song commemorating the SSR. The video was from 2020 when the Netherlands were celebrating their liberation, in which the regiment played a big role.

The colours now will be a part of the Southeast Military Museum's collection. And the mission of the museum is to preserve history and memory of those who served during World Wars, as well as the Cold War, peace-keeping missions and Afghanistan, and also to educate the future generations about those contributions and sacrifices.

During the presentation, Bird also thanked the president of Estevan’s legion Jim (Frosty) Forrest for housing the Southeast Military Museum at the hall.